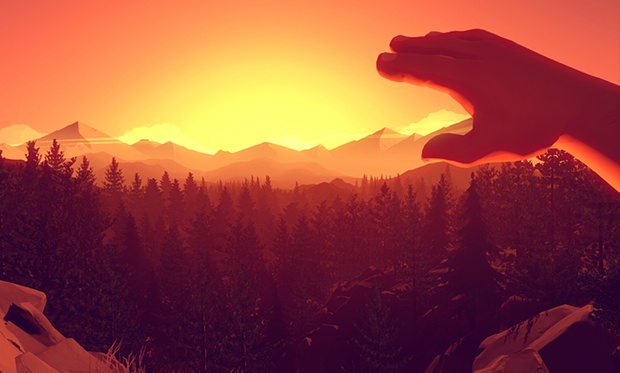 It’s no debate anymore that video games are an art form…in fact, it’s shocking that it ever was. As with any art form, it’s constantly evolving.

And peeps, if you’ve been in a cave for the last few months (if you have, that’s awesome, let’s hear about it), you haven’t seen the latest in the video game artvolution: Firewatch.

We gotta talk about this GD VG for a second. Firewatch is a hot new experiential video game – pun not initially intended – by Campo Santo. People freaked out about it on Twitter when it first came out, and for good reason. It’s as much an artistic experience as it is a narrative one.

And the concept art is equally incredible.

In Firewatch, you play Henry – a guy working in a Firewatch tower to get away from it all in the wilderness of Wyoming in 1989, just his walkie talkie connecting him to the outside world. But after kids start setting off fireworks, leaving threatening messages, and ransack his tower, he discovers that something strange is going on.

On top of that, however, the reason why Henry is “getting away from it all” is because his wife is super ill. Which keeps you constantly questioning whether you can trust Henry in his distressed mental state.

While the story is a mental trip in itself, the art just takes it to a whole ‘nother level. Olly Moss’s designs in Firewatch are so beautiful that every shot, every angle, every moment could be a computer screensaver.

The atmosphere is so beautifully rich, detailed, and uniquely designed. Although we’re not sure whether this video game makes you want to “Disconnect to Reconnect” and “Visit Your National Parks” like “Yosemite” more or whether the creepy mental trip factor makes you want to visit them less.

All we know is it’s dang beautiful.

While the big, AAA games like Halo and Call of Duty are stunning in their own right and have truly set new standards for video game graphics, the rise of the indie gaming industry is where true artistic experimentation, expression, and beauty thrives.

The best and most telling part though comes from a blog post on Olly Moss’s blog where he said:

“I’ve never been so passionate about a project as I am with this and I’ve never creatively clicked with a team so well.”

This game more than likely avoided the immense pressures that can stifle AAA games, which helps, but also had true passion behind it. When your designers are less stressed than they are excited and motivated? It comes across in a game, or any creation, really.

So congratulations on the amazing game, Campo Santo. And thank you for the beautiful visuals, Olly Moss. I don’t know about you guys, but I hope to see a lot more from this team in the (hopefully very, very near) future.