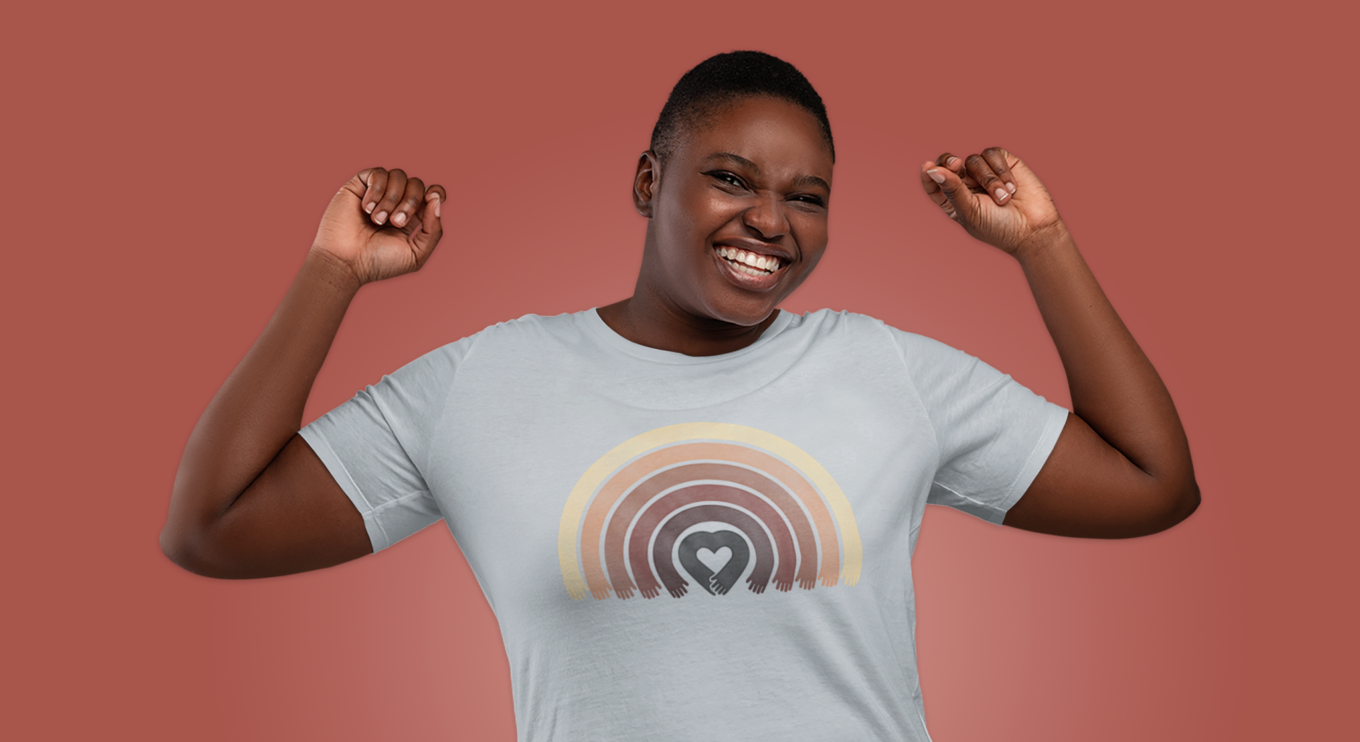 When Threadless Causes launched in 2020, one of the first Causes you could support was Racial Injustice. Now in 2022, you can find hundreds of artist-made Threadless designs supporting organizations fighting to end systemic racism. In celebration of Black History Month, we gathered 10 of the most-popular t-shirt designs raising money for the pursuit of racial justice in Black communities.

Each time you purchase any of these designs, the artist who created it donates a portion of their proceeds to a charity of their choice—like The Bail Project or Black Visions Collective. Then, Threadless matches that donation. If you want to have an even bigger impact, also consider visiting the listed charities and making a direct donation. Let’s make a difference together while sharing fantastic, wearable art!

In the game of basketball, the best rebounders clean the glass so well that the backboard sparkles. This sporty design by Australian artist megaduel is perfect for ballers who show heart, hustle, and muscle on the court.

A portion of proceeds goes to Black Lives Matter.

“Cat” is among the most-searched words at Threadless. That’s why we think it’s awesome that designer Aaron Thong used a popular theme and design to raise money for not just one, but four charities fighting systemic racism.

A simple, easily wearable graphic with a profound message. It’s no surprise that “Love All Black Lives” by Norman Duenas is among the most popular designs supporting racial justice. And to top it all off, Norman donates ALL of their proceeds to Black Lives Matter.

100% of proceeds are split evenly between Unicorn Riot and The Bail Project.

For this next design, indie illustrator and comic book artist AiAi experimented with mixed-media art. By layering different-colored skulls over each other, they created a dizzying holographic effect that looks awesome on a t-shirt.

A portion of proceeds from this design goes to Black Visions Collective.

This t-shirt design by artist duo S&O is FIERCE, depicting a snake and panther breaking through chains. It channels the passion and intensity of activists fighting to end systemic racism.

Bulo pays tribute to civil rights icon Dr. Martin Luther King, Jr. with a black-and-white portrait capturing his likeness with an elegant simplicity. Let it serve as a reminder that “the time is always right to do what is right,” one of Dr. King’s most famous quotes.

A portion of proceeds goes to Black Lives Matter and Chicago Freedom School.

Continuing the theme of civil rights icons, this design by Ninhol incorporates a quote by human rights activist Malcom X. It warns about media entities misrepresenting the truth to make the public more critical of the oppressed rather than the oppressors. This message resonates now more than ever.

Artist Erica Williams specializes in illustrations of flora and fauna with macabre tones. They stay true to their style with “Resist,” a ferocious wolf design delivering a just as powerful message: “No One is Free When Others Are Oppressed.”

A portion of proceeds goes to Black Lives Matter.

Sometimes it’s the simplest designs that resonate with the most people. Highly Irie’s heart-shaped peace sign is not only the most popular design of this list, but it also raises money for Racial Injustice, LGBTQIA+, and Human Rights Causes. Intersectionality is essential to social justice, of course.

100% of proceeds are split evenly between the It Gets Better Project, Black Visions Collective, The Bail Project, and ACLU.

Thanks to all of the independent artists who have joined us in our community’s fundraising efforts! Don’t forget, there are HUNDREDS more Threadless designs that raise money for racial justice and other Causes. Stop by to find an artist you love, a Cause you believe in, and a charity you support. Then shop with purpose! Happy Black History Month!