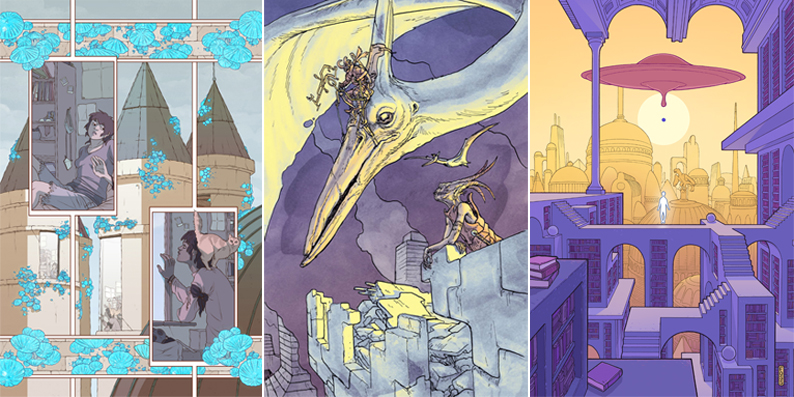 If you’ve ever wished there was a site where you could just binge on futuristic city art, “Think of a City” is where you gotta be.

There’s something especially beautiful about the cities of tomorrow. The possibilities are endless…which is as inspiring as it is daunting. The shanty-town of RVs modpodged into stacks in “Ready Player One” is a vastly different setting than New
York in The Fifth Element, the Citadel of Mad Max, or the super alien world of the comic Shutter.

“Think of a City’s” mission is to examine urban architecture through illustration, and to build a story through global
collaboration by featuring artists from all around the world and their urban visions. They have over 50 images on their tumblr, many of which are collaborations between artists, and all of which look like they’re Moebius-inspired, or straight out of comic books. And in many cases, they kind of are. Space Riders and Hellraiser illustrator Alexis Ziritt and Image Comics Production artist Addison Duke are just two of the artists who have had their work featured. And the pieces are meticulously curated, selected artists having just two weeks to finish their piece and only able to use black and white or just two colors (hence the Moebius-ish feel to many of them.)

Check out a few of the incredible cityscapes on “Think of a City” below. And hey, maybe illustrate a cityscape of your own to post in the comments!