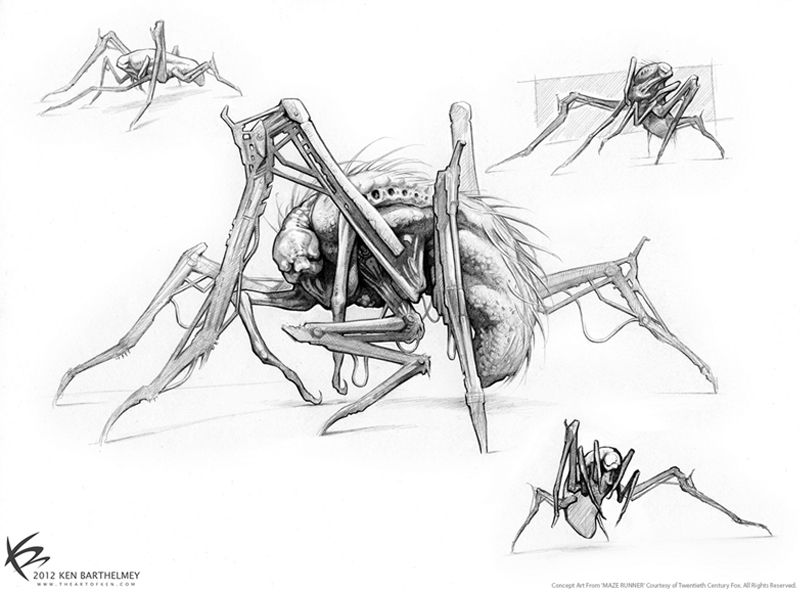 Movies might just be the ultimate collaboration between different types of artists.

But while the actors, screenwriters, and special effects artists (just to name a few) bring the world you see on the screen to life, it’s the concept artists who translate worlds and creatures from images we can only picture in our heads, to pictures we can look at.

And one awesome concept artist who deserves some serious fanboy/girl love is Ken Barthelmey for his Maze Runner creature design.

Ken Barthelmey is a “freelance creature designer” (a.k.a best title ever) and has been posting his incredible creatures on DeviantArt for years. But Maze Runner is his first big-time design project.

You don’t have to have read or seen Maze Runner to appreciate Barthelmey’s rad concept art for the maze’s “Grievers” – half organic, half mechanical, nocturnal creatures meant to kill the Gladers, or the kids in the maze.

And this is one of those cases where changes from a book description to a movie adaptation was actually a welcome change. In the book, they’re described more as slimy and hairy, nasty android slugs with no discernible front or back.

Barthelmey made them a little sleeker, a little faster, a little more predatory, with an awesome result.

One of the things that makes Barthelmey’s art awesome is how much attention he pays attention to making his creatures biologically believable. His site says that he spent a lot of time using his love of animals and science to study human and animal anatomy in order to make his designs more realistic, and it shows. You can see it in the details of the Griever, which has breathing holes that emulate the ones on a slug.

But the attention to biological detail didn’t stop after Barthlmey’s design was turned in. Weta Workshop constructed a whole internal structure for the creature – bones and muscles and all – to make it more believable.

They even did an exclusive video for Wired showing off how the creature moves:

Bringing a story to life in a realistic, visual way is a team effort. But concept artists are the front lines, the first to actually visualize the world that will take a massive team to build. And it’s hard to beat Ken Barthelmey’s amazing creatures. Check out more of Barthelmey’s awesome art on his site here.

All images courtesy of Ken Barthelmey