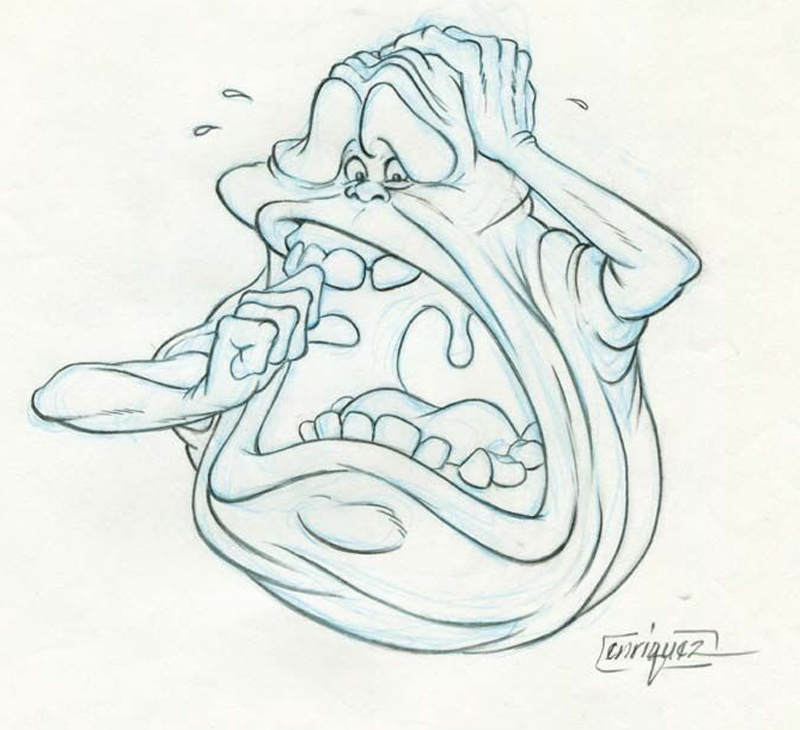 The Gatekeeper and Keymaster have come together to unleash the power…of dope concept art.

…If you’re still here after my super lame use of that reference, let’s bring on the pics! You’ve earned them. You’ve truly earned them.

Especially now that the “Ghostbusters: The Ultimate Visual History” dropped just in time for Halloween!

I’m a big nerd for “making of” and “behind the scenes” stuff. For creatives, not only is it cool to see the process – it’s also kind of comforting to see that our favorite franchises didn’t start out perfect.

I mean, take this concept drawing for the Godzillaish lizard monster that Ray’s pet lizard was supposed to transform into.

Or all these drawings of Slimer that prove he didn’t need CGI to make him freakin’ terrifying.

You also see concepts you wish a movie had included. Like the Stay Puft Marshmallow man shooting fire and wearing…yeah, a freakin’ hangman’s noose to become the stuff of fothermucking nightmares.

On top of awesome concept art, this book is also packed with info for days that will arm you with plenty of “well aaactually” knowledge-bombs to drop on your friends.

Like the fact that “Slimer” is actually named “Potatohead” – Slimer is just what the fans dubbed him. Because, well y’know:

Or the fact that this book very well could have been called “Ghostmashers: The Ultimate Visual History”. Because the original title was Ghostmashers, and the guys were supposed to be working out of a New Jersey gas station in the near-future where one of their foes was a skeleton on a motorcycle.

They were basically doing a Ghostrider movie before Nic Cage made it (not) cool.

Rather than take you out of the fantasy, books like this and the Mad Max artbook actually expand the world in which any movie is set. It gives you a new appreciation for the effort put forth to bring our favorite franchises to life.