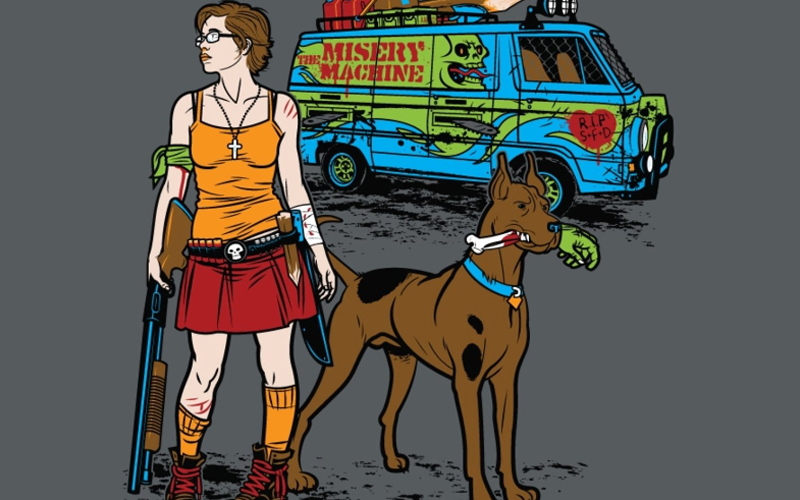 The first 3/4ths of this episode kinda followed the same pattern that basically every other episode this season has followed. People are couple-y, Carol’s a badass, people leave the group, the people who leave regret leaving the group, aaand repeat.

But then, DARYL AND MICHONNE AND GLENN, U OK?!

Ahem…we sadly do not have the answers, but we do have a recap of the #ThreadTWD experience from this week. Check it out below!

And join us on Twitter next week for #ThreadTWD where, for the double-long episode, we’ll be giving away three times the prizes! So six instead of two. Just btw.

Let’s start with the most important observation of the night: things Dwight looks like:

Dwight, aka the Toxic Avenger, is really starting to piss me off. #TheWalkingDead #threadTWD #TWD pic.twitter.com/Vh22XL9WQC

@threadless when Dwight looks in the mirror does he see the Hound or does the Hound see him? #threadtwd pic.twitter.com/X2I0rsuAx4 — TimScrib (@TimScrib) March 28, 2016

The relationship (fear) game was strong in this episode. People are happy, people are all coupled up and snuggly and have a big and little spoon to keep them warm at night…which means shit’s gotta get bad, right?

Is that your katana or are you happy to seem me? #threadtwd — keith groshans (@keithgdesign) March 28, 2016

Someone is getting their heart broken or eaten or both tonight. #threadtwd #TheWalkingDead https://t.co/iIlcdn2F4m pic.twitter.com/MCEcsGstAL — Threadless (@threadless) March 28, 2016

Which couple is getting wrecked by the season finale of #TheWalkingDead? #threadtwd — Alex (@alleycat2007) March 28, 2016

Then, Carol may have left the group, but her badassery is anything but gone.

Not to mention, she starts driving a super Mad Max-y car…she does kinda look like Furiosa, when you think about it.

Carol: Doesn’t want to murder. Will cut your ass down if you screw with her. #threadtwd #twd #TalkingDead #deadbuzz

Oh man…y’know the whole “If Daryl Dies We Riot” thing? It’s starting…maybe. Hopefully a riot won’t be necessary: 75% because we love Daryl, 25% because if he dies? That car up there is AMC, and the zombie horde = angry fans.

GUH, WE DON’T KNOW EITHER YOU GUYS. OUR EMOTIONS ARE IN CAPS LOCK RIGHT NOW. All we can do now is keep calm and look at some of the awesome selfies from the night:

Aaaaaand winner winners, brains for dinners. Tweet of the night:

Zombtee selfie of the night: