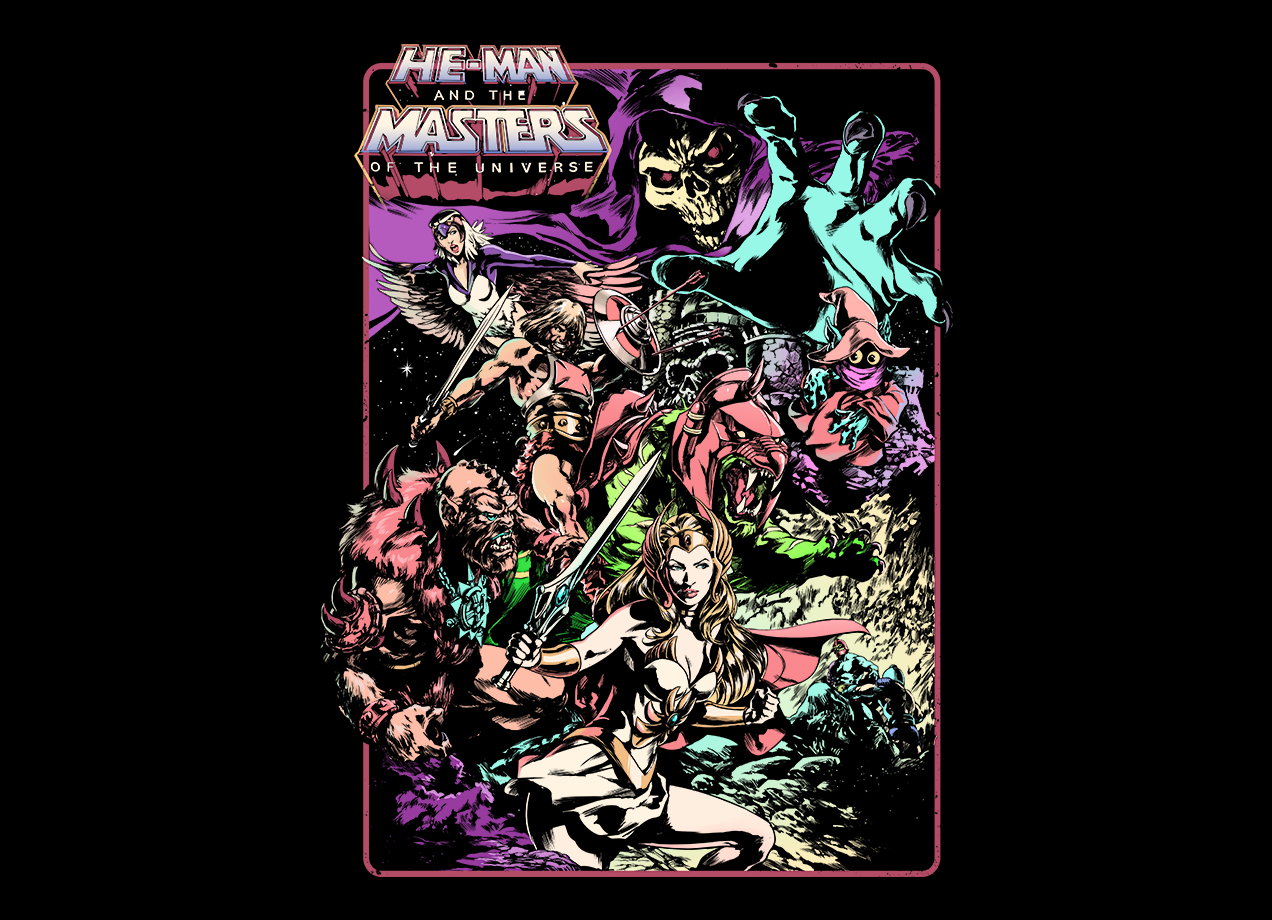 “This awesomely combines two great franchises into one image, while also implying what we all know… MOTU was definitely influenced by Star Wars, both creatively and merchandising-wise. Then again, they both come from Flash Gordon, Jack Kirby, and Joseph Campbell… this is like an ‘Inception’ of nerd-dom.”

“This one is just a straight up cool drawing. It doesn’t need the cleverness usually associated with pop culture tees, on account of the fact that it simply kicks ass.”

“This is a smart, very clean design, with an aesthetic that screams the best of the ’80s. I would wear. And, if I saw this shirt on a woman, I would know she and I were meant to be, and I’d run across the room and jump into her arms.”

“Remember what I said about ’80s mashups. AWESOME. Also, this is a reminder of just how damn METAL a skull faced wizard is.”

“Beautiful design. That Skeletor makes me want to go roller-skating to a Madonna song, and hear about cocaine abuse on the news.”

“Hilarious. This also reminds me of how my brother Steve and I used to make fun of my brother Brad, because he collected G.I.JOE while we were He-Man fans. I believe we (in our youthful ignorance) said G.I. JOE was gay. Yeah. G.I.JOE was the gay one. Not the half nude wrestling Barbarian men.”

“The sheer volume of characters represented here totally tweaks the completest in me. I mean, STRONG ARM is here! AND WONDERBREAD He-Man! Ah, how I would love to drunkenly explain that, pointing at my shirt, to a woman with a glazed over look in her eye.”

“This is an awesome illustration, and it showcases one of the best things about MOTU… the cool bad guys. Also, it features FAKER, who is far and away my favorite MOTU figure. The orange/blue color scheme of that toy is so striking, and the idea that you could be an evil robot impostor while rocking those colors is the coolest. Eternians? Totally colorblind.”

“I’m a sucker for anything Alexis Ziritt draws, and when it’s Battle Armor Skeletor and Evil-Lyn, I AM ALL IN. The hot pink skulls are a great touch.”