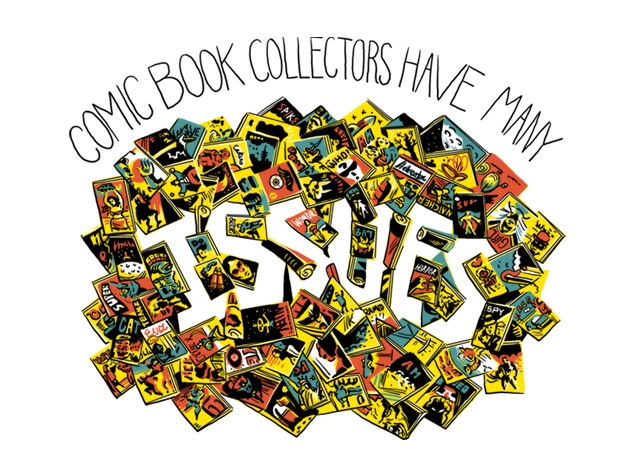 I’ve been a serious comic fan since I can remember, but in the last five years, comics have become an actual part of my life. I worked with some of my favorite writers and artists for Threadless Comics-On Tees, post weekly beer and comics pairings on Instagram, put out the first sequential comic on beer with Arcade Brewery, and partnered with comic creators for limited edition screen prints with Secret Panel. Basically, I live comics.

As you can imagine, trying to narrow down my top five ongoing comics from the dozens I pick up is a daunting task. It seems like a new great series is launching almost every month, and right now is an awesome time to be a comic fan. Besides your big publishers like DC, Marvel, Dark Horse, and Image, you now have Boom Studio’s, Oni, IDW, Avatar, self-published titles, and many others featuring great reads and art.

However, I managed to whittle down all the great options to my top favorites. Read on to discover the five comics I can’t wait to read each month!

Though skeptical when Brian Posehn started writing a new series for everyone’s favorite Merc with the Mouth, I was sold when I heard Tony Moore would be illustrating. I met Brian at San Diego Comic-Con back in 2011 where he told a story about how he threatened to fart in someone’s pee hole. I should have known based on that story alone that Brian would be a perfect fit for Deadpool.

Traveling through different comic eras, the series has been a fun ride and at times it’s even been dramatically heartfelt. Brian has you laughing one panel, only to be curled in a ball of feels by the next. Brian made me care about Deadpool. Unfortunately, due to Fox Studios owning the movie rights, we only have one issue left before he’s killed off and thus ending one of my all-time favorite runs for any Marvel character ever.

“For one day in rural central Wisconsin, the dead came back to life. Now it’s up to Officer Dana Cypress to deal with the media scrutiny, religious zealots, and government quarantine that has come with them. In a town where the living have to learn to deal with those who are supposed to be dead, Officer Cypress must solve a brutal murder, and everyone, alive or undead, is a suspect.”

Billed as a “rural noir”, Revival is written by Tim Seeley, who has come up with an interesting take on the zombie mythos in a small Wisconsin town. People start coming back to life but are much different from when they were previously alive, and what’s up with the weird spirits that seem to be roaming the countryside?

The mystery of what has happened in this quarantined town seriously draws you in, and Tim Seeley creates such relatable characters. Watching “revivers” do terrible things to themselves that would typically kill a normal person – for fun – is just the right pinch of disturbing. Match this up with amazing art by Mike Norton and covers by Jenny Frison you have the perfect midwest horror comic.

Saga has been a huge hit for many reasons. For one, it’s amazingly well-written by Brian K. Vaughn (who authored Y: The Last Man and Lost, seasons 3, 4, and 5) and features top notch art by Fiona Staples. But it’s also very much the love story: Saga follows a couple from two warring extraterrestrial races who go on the run to protect their newborn child.

As funny as it is serious, Saga contains some of the most heartbreaking moments I’ve ever read in comics, and each issue leaves you with a cliffhanger that leaves you in wrenching anticipation until the following month.

Matt Fraction and Chip Zdarsky have found the perfect formula to mix sex and superpowers in Sex Criminals. Suzie and Jon meet at a party and, after sleeping together, discover that they share the ability to freeze time when they orgasm. While their relationship develops and they explore their sexual histories, they decide to rob the bank where Jon works in order to save Suzie’s endangered library.

Sex Criminals also has letters pages called ‘Just The Tips’ that is often as entertaining and informative as the comic itself.

“WE WOULD TELL YOU TO PRAY, BUT IT WOULDN’T DO ANY GOOD. YOU HAVE EARNED WHAT IS COMING TO YOU.”

This is my current top pull of all the comics on the shelves right now. East of West has it all. Brilliantly orchestrated by Jonathan Hickman and illustrator Nick Dragotta, East of West is a sci-fi western set in a dystopian alternate universe where fate rests with the Four Horseman of the Apocalypse. It features brilliant dialogue and incredibly drawn actions sequences that remind me of great anime such as Akira.

East of West’s tagline is”The things that divide us are stronger than the things that unite us”, and in an interview with Previews catalog, Hickman explains the meaning behind it: “The end times are imminent and we all hate each other too much to come together and solve our problems. Our final destination is imminent, and it is the Apocalypse. And then, in the face of all that despair and gloom, somehow there is still hope.”

Tell us: What comic books can’t you put down?