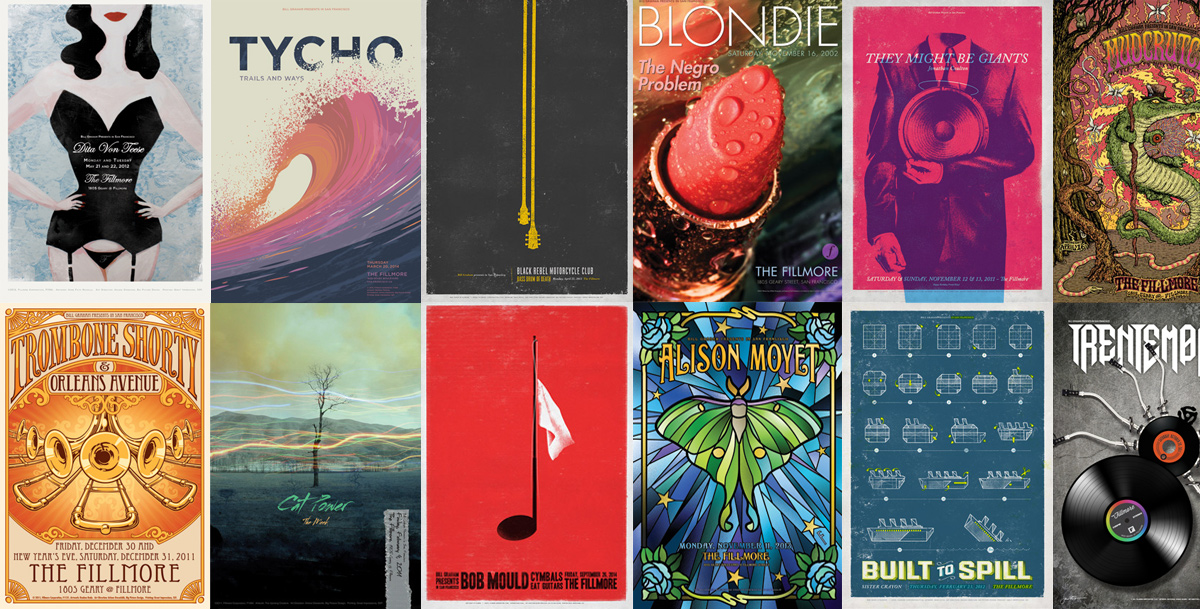 Editor’s Note: seeing as it’s October, apologies for the delay on getting this post from our computers to yours! Our wonderful Jess Hanebury was SO excited about “Back to the Future” day on Oct 21st, she forgot the whole month of September. We can’t say we blame her.

Welcome back to Tuned In – an ongoing series that highlights the best concert posters of the month (if you missed July’s roundup, check it out here!). These limited edition posters are typically available for purchase at each band’s merchandise table during the show, with a smaller portion sold directly from the illustrator or design studio.

So before we bundle up for fall, let’s throw it back to summer festivals and concerts by looking at the best posters of August:

As Lollapalooza descended on Grant Park, so did a number of official aftershows. One I was sorry to miss was Lord Huron at the Metro. Not only do I love their latest album, Strange Trails – I also love local artist Jay Ryan and his poster for the show. Jay’s style of hand-drawn text and curious critters have been a staple of his for over 20 years, and all over his busy summer, as he created posters for My Morning Jacket, Hum, Heartless Bastards and this year’s Pitchfork Music Festival.

My Morning Jacket by Todd Slater

A number of bands have had excellent posters this summer, but none have shown up as consistently as My Morning Jacket. Todd Slater’s latest poster for their two nights in Atlanta is like nothing I’ve ever seen, and for good reason. As Slater noted, “The challenge of making these panoramic landscapes is to fuse the real world with a supernatural one. Everything I envisioned was temporal and ethereal; both familiar and foreign.”

The 4-color print has an artist edition of 90, a holofoil edition of 47, and a gold edition of 40 to be sold exclusively at MondoCon.

You wouldn’t know it from looking at his work, but Kii Arens is originally from St. Paul, Minnesota. Despite moderate success as a musician, he moved to LA in 2003 and has created posters for over a decade, working with major acts (Radiohead, Taylor Swift, Queens of the Stone Age, Bruce Springsteen) when he isn’t presenting exhibits at his gallery, La-La Land. Arens’ latest poster for Tame Impala goes heavy on the LA vibe with bright colors and palm tree silhouettes to commemorate their show at the Hollywood Forever Cemetery. Limited to 100, the signed and numbered lithograph is available now.

Technically, half of this collaboration between Maxx 242 and Brandon Heart was for a poster in July…but I think we can let it slide. There were a number of ways you could have purchased these posters, created for shows in Houston and Dallas, respectively. Both were created to look like playing cards, with Heart designing Houston (July 31) and Maxx 242 focusing on Dallas (August 1). Show editions were printed in purple and sold individually, or as an uncut sheet. Both artists also released their “artist editions”, printed in red through F4D Studios, as well as a foil print. All versions were super limited and sold out.

Although Methane Studios has been creating posters since 1998, the bulk of their hard work has been dedicated to Dave Matthews Band‘s customary summer tour. A quick glance at their archive and shop would tell you that they’ve created a minimum of 20 posters exclusively for DMB this summer! My favorite of the bunch is their poster by Mark McDevitt for DMB’s show in Colorado. The 3-color print, limited to 960, has a very simple design, but also captures the essence of Colorado with a star-filled sky and nature all around.

Much like Methane Studios, Ames Bros. was built on a relationship with a single band. That band, Pearl Jam, is the reason I collect posters. Without Ames Bros. (who are neither brothers, nor named Ames), I would have bare walls and considerably more money. Their latest poster for the Foo Fighters’ show at Wrigley Field was so successful; the band requested an additional variant. The 5-color standard edition was limited to 500, the original variant was limited to 100, and the online exclusive was limited to 200 . 100 sold via Ames Bros. and another 100 sold on Foo Fighters’ site.

Next month’s batch will be here sooner than you think, with a few new artists that have yet to find their way into the series. So keep reading and checking out shows before most bands go into hibernation.