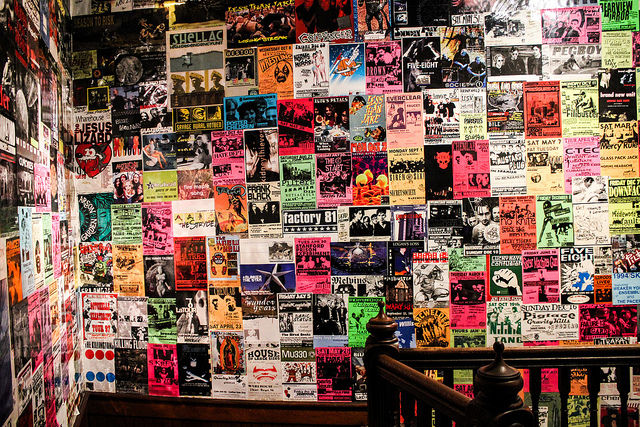 It’s finally here, the night you’ve been waiting for: Your favorite band is in town for a concert, and you’ve got tickets. You arrive, the lights fade, and for a couple of hours, you get a break from whatever ails you.

And how will you remember this night? Aside from the hangover, and maybe a ticket stub, you’re probably left with blurry photos and an impressive bar tab. However, you could do yourself a favor and stop by the merchandise table; bands these days are selling incredible posters, and it’s just what you need to commemorate your night – and get your fix for some serious art.

Similar to the resurgence of vinyl, concert posters have seen an increase in production and value. These extremely limited prints can range from 500 copies for a major arena show to as little as 20 for a small, intimate venue. Any number of factors can contribute to what makes a poster great, including overall design and color, quality of paper, and the chosen ink. Bonus points if it incorporates the location, band’s material, or celebrates a significant moment for the band, such as an anniversary, record release, or reunion.

For one or all of these reasons, and being the avid music and art fan that I am, I’ve determined the following the best concert posters for March:

The Decemberists by Ken Taylor

The moment I saw Ken Taylor’s poster for The Decemberists ongoing spring tour, I kicked myself for not buying a ticket. The award-winning, Melbourne-based illustrator and designer has been creating posters since 2006, working with Pearl Jam, Kings of Leon, and Bob Dylan, to name a few. His style of striking images and vibrant color could not be better represented than this 5-color print, featuring a sinister blue jay against metallic gold and silver.

As they say in show business, “the show must go on”, even if your guitar player leaves weeks before your next gig. Despite the confusion over Tom DeLonge’s departure from Blink-182, the band wasted no time finding a replacement to play a show at the legendary Roxy in Hollywood. Ian Williams’ cuddly cartoon rabbit, complete with bloody knife and taunting middle finger, epitomizes the juvenile antics of Blink-182 to a T. The 8-color, signed, and numbered print is available now, and limited to 50.

In a shade over a decade, Todd Slater has become one of the most respected and prolific artists on the scene. A quick glance at his overwhelming archive will have your head spinning with hundreds of posters for dozens of bands. Slater’s style is very complementary, often inspired by the music or location, and his latest poster for Dave Matthews Band’s two-night run in Mexico City is stunning, using elements of Aztec and Mayan culture.

To say Chuck Sperry’s work is iconic would be an understatement. His style of psychedelic, West Coast-inspired prints has led to collaborations with The Who, Beastie Boys, and more recently, The Black Keys and Widespread Panic. He created his latest work with Umphrey’s McGee for their Oakland show at the Fox Theatre. The piece, featuring The Muse, is one of two posters; the other, created for the previous night’s show in Los Angeles, depicts a reverse image of The Muse with blue hair. Both are limited editions of 350, 7-color prints on metallic silver paper.

Amazing experiences and potentially life-changing, concerts are worth the memory – regardless of whether you attend 50 a year, or simply a handful. The next time you’re out, skip a couple of beers and buy a poster instead. Between the incredible artwork and associated nostalgia, there’s no way you’ll regret it.