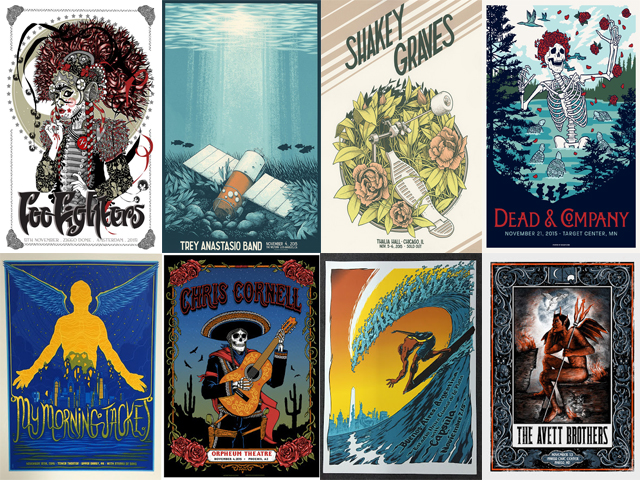 Welcome back to Tuned In – an ongoing series that highlights the best concert posters of the month (if you missed October’s roundup, check it out here!). These limited edition posters are typically available for purchase at each band’s merchandise table during the show, with a smaller portion sold directly from the illustrator or design studio.

I warned you this time would come…The end of touring season is upon us, and I am majorly bummed. While that doesn’t mean the end of Tuned In, it probably means a lot of posters from mainly California and the South.

For me, it begins and ends with Pearl Jam. They have been my favorite band for the past 25 years and are the reason I started collecting posters. Sadly, 2015 was a rare year where I didn’t have a chance to see them, as they played just a single show in the US, as well as a quick Latin America tour. Long-time collaborator, Brad Klausen created this stunning poster for their show in Bogota, Columbia, inspired by the fabled city of El Dorado. Limited to 200 and long gone, this 5-color print is one of my favorites, and Brad’s best of 2015.

The ever-changing lineup of Maynard James Keenan’s side project hit it hard in November with 21 shows in support of their new album, Money Shot. Dave Hunter, a staple of the Bay Area music scene for the last two decades, was asked to create a poster for the Fillmore in Philadelphia. The show edition, titled “Rocket Man”, was limited to 175, hand printed on Cougar white.

Three variants were also created, printed on lava, rainbow, and sparkle respectively. Each variant is extremely limited out of an edition of 10!

Last month we saw Nate Duval’s work for Leon Bridges’ East Coast dates, and this month we find Leon wrapping his fall tour with a little help from James R. Eads. Hailing from Los Angeles, Eads has had a tremendous year, working with Dave Matthews Band, Foo Fighters, and Alabama Shakes to name a few. His poster, named after Bridges’ song “Flowers”, is a 4-color screen print, limited to 50, created for his 2-night run at the Fonda Theatre.

The Avett Brothers by Chuck Sperry

2015 isn’t even over yet, and the road warriors that are the Avett Brothers already have 23 dates on sale for 2016, including a stop at Madison Square Garden. That’s impressive.

Sperry’s poster for their show in Ann Arbor, Michigan feels like a true collaboration. Most notably missing from the poster is Sperry’s muse, instead substituted with a dapper skeleton and less psychedelic imagery. The standard edition is a 4-color print on cream paper, limited to 225. A bronze edition of 20 was also created.

Until next time, keep supporting live music and local artists!