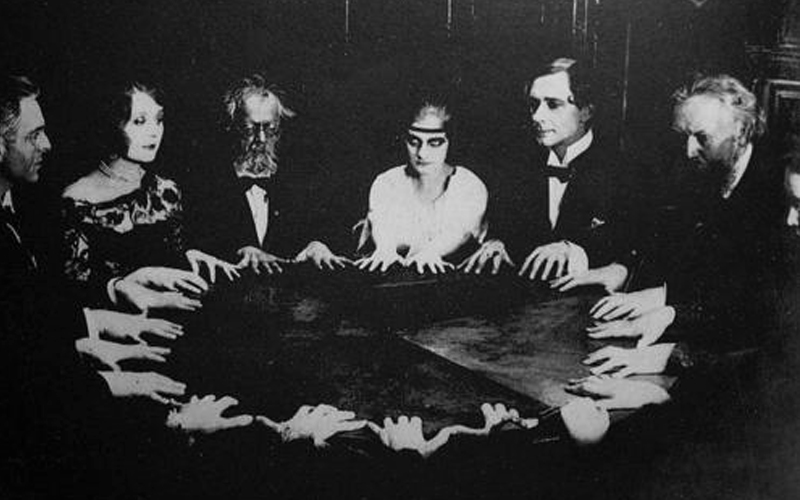 Ever wanted to do a séance but were too freaked out? Well now you can have all of the paranormal fun from the safe, non-haunted comfort of your own home!

We’re doing a real séance on Tuesday October 27th at a super haunted building in Chicago that was the host of many-a-criminal-hanging back in the day.

We’re channeling the spirits within the walls of Threadless HQ for our latest design challenge, The Occult! Join us by designing a tee inspired by all things supernatural, paranormal, and mysterious at Threadless.com/TheOccult The winning design receives $1,000 cash, $500 Threadless gift code, plus, anyone who is printed (including the grand prize winner) will receive up to $7 on each t-shirt of their design sold on Threadless.com.

We’ll do the scary stuff, you just sit back, pop some popcorn (optional), and enjoy! All you gotta do is download Periscope, follow us @threadless, and tune in at 9:30 PM on October 27th to watch the fun.

Don’t believe in ghost stories? We asked an employee at Whitehouse Post – a.k.a the place we’re séancing at – employee Dawn Guzowski for some stories…and oh, were there stories.

Back when I was assisting late nights, I would always hear people talking in the halls outside my door (suites 1 & 2 – currently where production and suite 9 are located). This was not coming from the street – definitely inside the building.

I would check the hall, check that our stereo/PA system wasn’t still on and go out into the lobby and check outside by the elevators. No one around.

I could never quite make out what was being said. Just sounded like general conversation. Then I would loudly say in the hallway, “please leave me alone, I’ll be gone soon!” and it would seem to stop.

It was late fall when I was leaving the office, but while I was standing at the 5th floor elevators, it got incredibly cold. Not a breeze, but more like I stepped into a refrigerator. Felt too cold for the coat I was wearing. I moved away and it was warmer. I even reached my hand back out to where I was standing before but couldn’t feel the same intense cold anymore.

A former assistant had a story that he was working late one night at the far end of our building (the west end of the hall). He started walking to the kitchen for a snack (currently suite 5) when out of his peripheral vision, he saw someone walking from midway in the lobby towards the front door. He looked up and saw the back portion of a white shirt and blue long skirt clearing just passing behind the wall.

No one was supposed to be in the office so he started running down the hall, thinking someone got lost in the building on the wrong floor. But the closer he got to the lobby the slower he started running because he realized the type of clothing he’d seen – that it seemed to be a style from a different time period…and realized he had also not heard the front door open and close.

He stopped and listened. Didn’t hear anything. Went to lobby. Didn’t see anything. Not hearing the elevator either, he peeked out the main doors…no one was there.

Featured photo courtesy of thats-not-victorian and “Dr. Mabuse the Gambler”