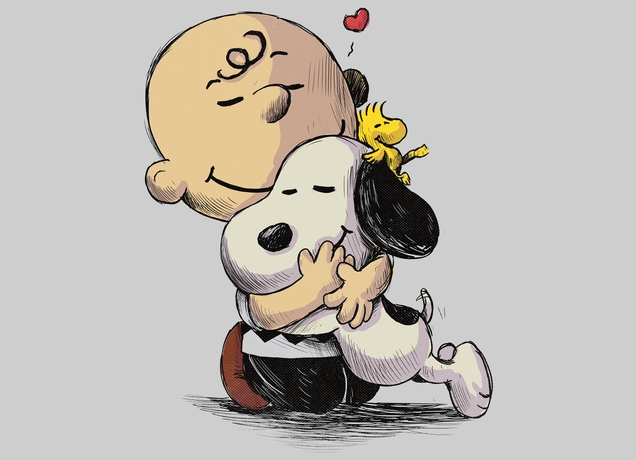 We know you guys can’t get enough Peanuts, so we figured heck – let’s give you even more! That’s right; today we debut five more original designs to add to our Peanuts collection, and they’re just as awesome as ever. But you know who’s the most awesome? The great Charles Schulz himself, who, of course, ultimately inspired each of these brand new designs. Because of his influence, we asked the artists behind this week’s new tees to name the one question they’d ask Schulz if given the chance. Read on to find out their answers, and shop their new tees here!

I think I’d ask him, ‘If you were starting your career today, how would your comic strip differ?’ Or, if it weren’t too crass, ‘If Peppermint Patty was to grow into a young woman, do you think she’d identify as lesbian or transsexual?’ – Dgeph, New York, NY

Charles, you started working on the Peanuts gang in the early ‘50s and went on for almost 50 years! Did you ever get bored and dream of a creating whole new series, or think about starting a new career as a ukulele instrumentist? – Victor Calahan, Paris, France

I would like to chat with him about the style of the characters and how they’ve changed subtly over time. Was it a conscious decision or something that just happened? – Rick Crane, Somerset, United Kingdom

I’d be curious to know about Schulz’s favorite Peanuts collaboration. More important though, I would love to know his secret to being so focused and productive… he only took one 5-week break in nearly 50 years of the daily strip?! – NDTank, Daniels, West Virginia

Is there any subject matter that you wanted to voice with the Peanuts but were unable to? – John MacDougall, Quincy, MA