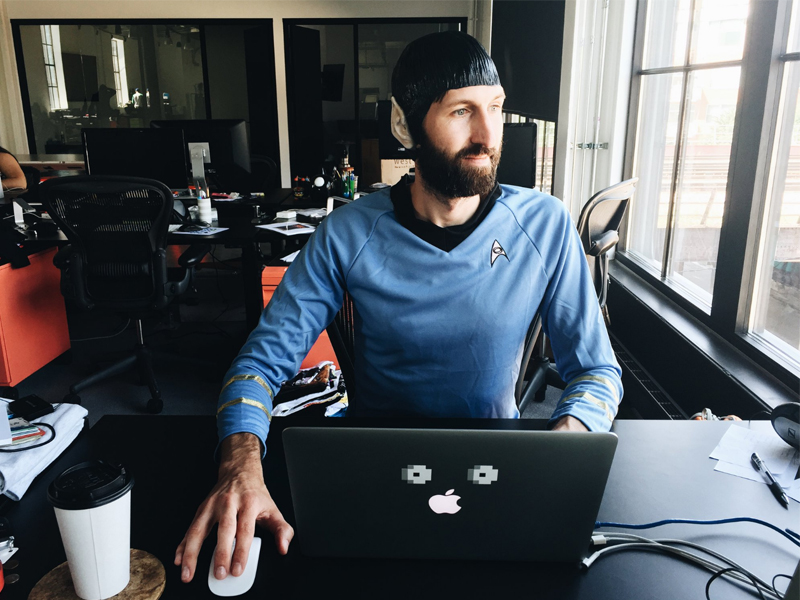 Happy 50th anniversary, Star Trek! From the original series in the ’60s spinning off into several different – and equally important – TV shows, to spawning a whopping 13 movies (so far), Star Trek has truly lived long and prospered.

In honor of 50 glorious years of Star Trek making TV a little more Cardassian and a little less Kardashian, we had our artists create some amazing designs that Trekkers will dig. And we asked them, what’s your favorite alien species in Star Trek (or favorite sci-fi alien)?

Behold, the Star Trek collection: the (not so) final frontier. Live long and prosper, and may the force be…wait no, scratch that last part.

The Catullans a.k.a space hippies. You should see them jamming, that’s the first intergalactic jam. Here, I give you the Youtube link.

From Star Trek, I would say a Betazoid, like Deanna Troi’s mother. The fact that they get married in the nude cracked me up. From a movie, definitely Gizmo! He’s adorably dangerous! And it’s kind of a stretch, but from TV I would say Roger the alien from American Dad. He pretty much trumps them all.

My favorite alien species in Star Trek is the Borg because resistance is futile.

My favorite – tough decision, while Data is my favorite character and Spock is an icon in history with no equal, the vote goes to Q. It was a close call with equally great competitors taking part, but Q wins by a slim margin of 10 quadrillion points!

Without a doubt I’d have to say Klingon. I could stare at those bumpy heads for hours!

I was tempted to be cool and go for a really obscure species but you just can’t beat a good Klingon. Bumpy head, badass language and a hairstyle that words just can’t describe (I’m looking at you Worf). What’s not to love!

My favourite alien species in Star Trek is The Horta from “Devil in the Dark.” Although looking like a mound of pulsating sick, [SPOILER ALERT] the revelation that the bad guy was just a mother looking after its young was a brilliant and thought-provoking twist. How sweet – not a dry eye in the house.

We are the Borg.

One of my earliest Star Trek memories is watching The Wrath of Khan on summer vacation when I was 7. The scene featuring a Ceti eel going into Chekhov’s ear freaked me out. For the rest of the summer I covered my ears whenever I saw any kind of worm or caterpillar.

My favorite alien from sci-fi is definitely Predator. One of the many monsters from movies that really captured my imagination as a child and spawned  hundreds of mediocre drawings sprawled across my room. Also any movie with two minutes of dudes shooting into the jungle is always a winner.

Well…The obvious choice of aliens, and dare I say logical choice, would be Vulcans.

My favorite alien from a sci-fi movie is the alien from the movie Predator, of course. I remember when I first saw the movie, I was a young kid. It was so frightening for me because the alien had such a scary look and he was unbeatable, especially with his cloaking ability. But eventually you can count on Arnold Schwarzenegger to save the day and beat the sh*t out of the alien : )

Although I love Star Trek, I feel I am not well versed in that franchise’s alien species so I’m gonna go with the Aliens alien! As an audience we marvel at alien intellect and their technologies. On the other hand aliens are also supposed to be creepy, scary and gross and that’s why I like the face huggers from the Alien movies. They excelled in burning an image of disgusting space horror in my mind.

Them Q folks are my favourite. I like thinking about parallel universes beyond comprehension of us lesser beings (Oh! Human race burn!) Star Trek rules.

As for your question, my favorite ST alien species would definitely be Vulcans – because Spock. A close second would be Klingons.

Ah, the Borgs are my favorite by far! I’ve always liked the bad guys and they are badass. “Resistance is futile!”