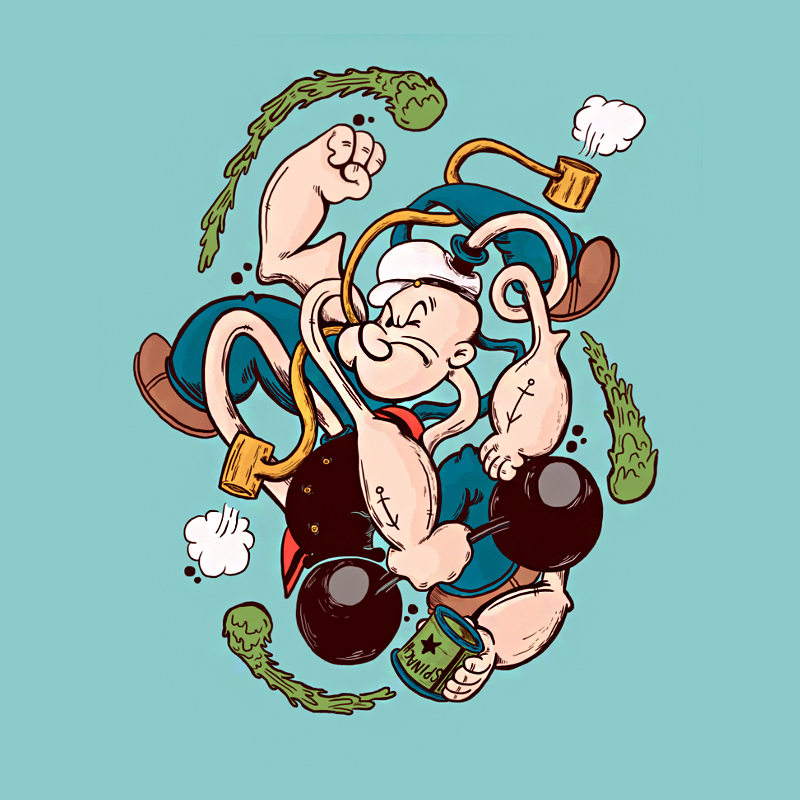 You don’t have to have seen every episode of Popeye to be able to read “Well blow me down!” in his voice. Whether he was before your time or your parents showed you episodes on VHS, this classic character is hard not to love, rockin’ tats and diggin’ spinach before inked sleeves and kale were cool.

And for our Popeye and Betty Boop challenge celebrating these classic characters, Shawn Bowers created an image of Popeye that celebrates everything the sailor loves.

We talked to Shawn about his winning design, working in Chicago’s comedy scene, and his Artist Shop. Check out the interview below!

You’re a jack of all creative trades! Tell us a little bit about yourself and all the amazing things you do!

Amazing is a generous word, but it’s true that I like to make lots of different things! I draw and write and perform and do video stuff and kind of just follow whatever seems like it’d be fun to try. I’ve tried ghost-writing old fashioned joke books. I spent a few years pretending to be a woman on dating sites,and I occasionally do a live show that’s a reading of those verbatim conversations. Lately I’ve been mostly focused on making art and finding my style and all that! I’m originally from Kansas City, moved up to Chicago after college and have been here ever since.

I noticed a lot of your submissions are based on more classic pop-culture staples – do you have a certain attraction or affinity to this era in art and pop culture?

I have an affinity for pop culture current AND classic. Like every other person on the planet, I’ve consumed dangerous amounts of movies, TV, comic books, and video games over the years, so it’s just on my mind. I also really like work that kind of remixes familiar elements into something new. I get a tingly little brain satisfaction from seeing one thing successfully adapted into something else, or warped through different artistic styles and voices.

Which I think is like…a pretty common thing right now, and that’s great! Bootleg Barts, Seinfeld2000, going back to like Joe Brainard’s Nancy variations or even something like The Lego Movie. Simple, older, familiar things are just good raw materials for simple, newer, stupider things!

Are you a Popeye fan too? What attracted you to this challenge?

I was in the midst of doing my fat-cat-who-shall-not-be-named series at the time and it seemed like I might be able to pull some of those same ideas and apply them to Popeye, because he’s also got a ton of classic, familiar elements; the pipe, the spinach, the muscles, all that good stuff.

I’d tried a similar style for a previous Felix the Cat challenge, and a separate Betty Boop submission for this challenge, which kind of play with the same ideas. Those classic cartoon characters, who knew!

Ooooh boy, that’s like asking a man with 100 children to name his favorite child (I have no children). I just bought the Omnibus for Peter Milligan and Mike Allred’s X-Force/X-Statix comic from a few years back and I’ve had a nightly ritual of sitting with this giant 1200 page tome and re-reading a few issues at a time. Easily one of the best pop comics of all time. It’s giving me inspiration, as I’ve been working on finally getting up the nerve to write my own real, proper comic book.

How did you get started making art? Do you do it professionally?

I’ve been drawing since I was a kid – I think I thought I wanted to grow up to draw comic books. But then I thought maybe I wasn’t good enough at art, and figured I’d be better at writing and performing. I didn’t really draw at all for a whole stupid decade because I was so focused on the other stuff. I finally started making art again maybe a year and a half ago and found it to be really relaxing and fulfilling and I’ve been trying to make up for lost time ever since.

But no, I don’t do it professionally…by day, I’m an Associate Creative Director for a company called Jellyvision. So I spend my days writing and directing things, then I spend my nights drawing and making other things.

How do you balance being active in so many different creative fields?

I like having a lot of fires going at once because it lets me jump around. If I’m not feeling inspired to draw, I might have a comic book script that I can pick up and try to finish, or an idea for a live show that I can sit and puzzle out how to execute it. I’m not great at focusing, I guess is the point…but I think being a “distracted creator” helps me be less scared when I’m working, because if I’m staring too hard at one thing for too long, I start to get all those normal “IS THIS EVEN WORTH IT” creative doubts.

That said, I also like making things for an audience to consume, whether online or in real life…if I can see people responding to something, that gives me inspiration to keep exploring that idea or style or project.

How’s the creative scene in Chicago?

Vibrant as hell! I came up through the comedy scene, which is full of people making all sorts of amazing things.  It’s a blessing and a curse, because I have a social media feed full of cartoonists and comedy writers and filmmakers who make me nonstop jealous of all the great work they’re doing, but then that just pushes me to try and do better work myself. I’m trying to get better connected to the local art community, too! Most of the Chicago artists I know, I only know through the Internet. Chicago artists, please tell me where you hang out so I can come find you.

You have an Artist Shop with us too! Tell me a little bit about the designs you have for sale.

A lot of what I have up right now is inspired by…let’s say…a notable feline who doesn’t enjoy exercise and favors some days of the week less than others. I tend to do things that have some basis in pop-culture, but I got really obsessed with this particular cat recently and did a series where I tried to do a different interpretation of him every day, just to see how far afield I could go while still using his recognizable elements.  I lasted for about 50 days before I felt like maybe a break would be good.

I post new things on Instagram fairly frequently, so check me out there!  And thank you, Threadless, for being cool and fostering new artists…I’m very proud to be joining the ranks of the printed!