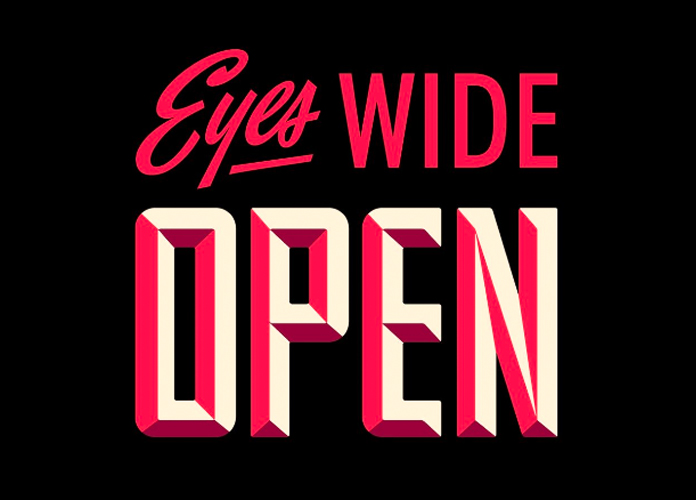 Trying to create a design in five words or less is kind of like the art version of “what five movies would you take with you on a desert island?” There’s so many choices…and HOW does this desert island have a TV?

But Mathiole knows what’s up. He not only won our “Five Words or Less” challenge, but had a second design printed this week too, both consisting of five words or, you guessed it, less.

Mathiole is no Threadless n00b.  He’s pro-status and has seen many-a challenge, printed many-a shirt with us, and you’ve probably read his words about Back to the Future, his holiday wishlist, or about how he gets in the zone.

We talked to Mathiole about his designs, inspiration, dreams, and made him answer each question in five words or less. Just kidding. Check out his answers below!

What do you do on the daily?

Draw, draw and draw, basically. I usually stop here and there to watch some series or play a videogame or just procrastinate, but the thing I do most everyday is to draw (or anything that relates to my work).

What got you first started in art?

Salvador Dali’s surreal paintings were the first thing that blew me away, I was just a kid back then. A little after I got obsessed with Comics and from there I decided to study and never stopped :)

I’m actually back and taking drawing classes again, and loving the experience.

You seem to explore the comic book style a lot, both modern and retro. Do you ever illustrate comics?

Yeah, as I said, the whole thing started with comics. I took a 3-year course about Comics, that included not only how to draw, but also how to make scripts and create stories and characters. I was too young to fully understand that part but I think I ended up learning something here and there. I’ve never illustrated any comics professionally, but I did some fanzines with my colleges way back.

I’m honestly unsure if I want to make a comic book. I don’t think my drawing skills are mature enough for that, but now that i’m taking classes again, who knows? I have a really cool idea for a comic book, just waiting to be done. Maybe one day you’ll see it!

What are your future goals?

I used to think more about goals. Now i’m going more with the flow I guess. I do want to become a gallery artist, but that seems so distant right now, for a number of reasons. I’m happy where I am, but we always want that thing we don’t have, right?

You’ve been on a Threadless rockstar streak since 2007! How has your style evolved?

If you look into my first submissions you’ll see haha. At that time I was in college and still learning how to use Photoshop and Illustrator. I had no idea what I was doing, but I was enjoying, that’s for sure. As years went by, with the help of all Threadless folks, I started to slowly understand the t-shirt market. That was a breaking point to me and from there, I felt much more comfortable to create my stuff.

I still want to evolve a lot more and I’m working for it, day by day!

What inspired your 5 Words or Less “Eyes Wide Open” design?

I had this idea for a looong time, but when it comes to make typography designs, although I know the theory of types and how to work with lettering and stuff, although I’m deeply passionate with this field, when it comes to making the real thing I lack confidence. And because of that, I also get a little lazy.

But when Threadless launched the contest I felt that it was a good time to try something out. The idea is pretty simple – just a word play with that famous “Yes, We’re Open” sign. I’ve thought more on a cliché quote that I keep hearing in 50% of all songs: “close your eyes”. And then, as I like to twist clichés, I wrote the opposite

What was your first winning design?

T.in.Vasion – back when Threadless had a thing called Twelve membership club, something like a subscription t-shirt club

What design of yours are you MOST proud of? Of ALL time?

I guess I’ve yet to make a design that really makes me truly proud. It’s hard to point out. “End” (right) is still one of my 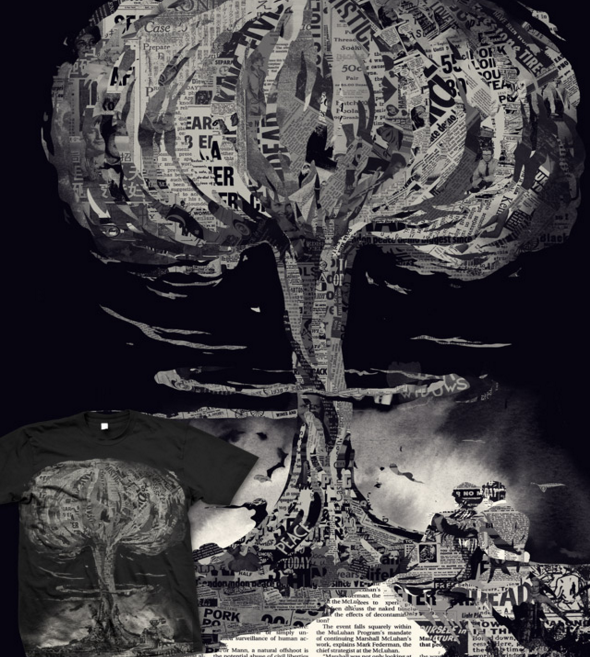 favorites, I think it has an exceptional concept and the collage makes everything come together. But it’s funny because I have this t-shirt and I never feel like using it, so there’s that.

My most popular designs are usually the ones I don’t really like to wear, which is pretty weird haha, and maybe because of that, I don’t feel truly proud about a particular design. There is, however, a project that I’m really proud of (and something that I’ve been thinking to continue somehow.)

I saw your sister’s article about you on our blog from awhile ago! In it she said she used to draw more than you – is she jealous ever?

I don’t know! You’ll have to ask her haha, but I don’t think she should, she’s a better writer. I’m always helping her with drawings and stuff, and she does the same with writing. We complete each other :3