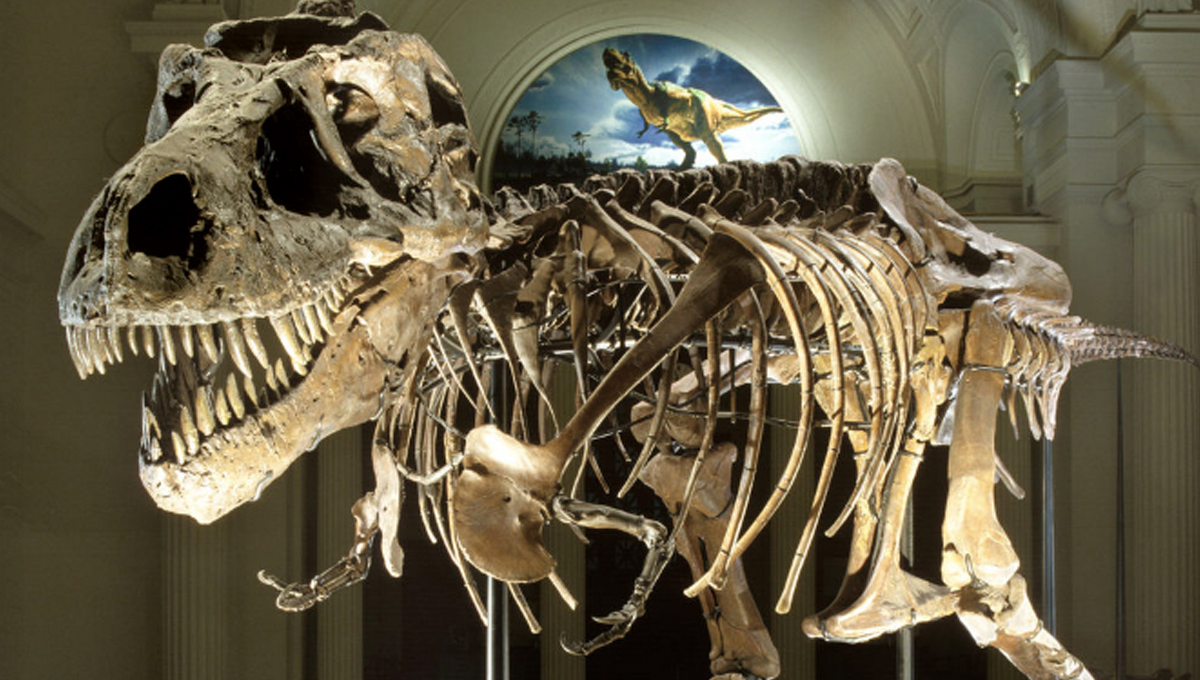 When it comes to having mad Twitter skills, you would think you’d need arms long enough to reach a keyboard to actually slay the social media game. But one Twitter T-Rex is proving us oh-so wrong. Because as Jeff Goldblum totally said in Jurassic Park, “Tweets, uh, find a way.” Meet Chicago’s own SUE the T-Rex (although, the short-arms thing still stands…Exhibit A and B…no ‘museum exhibit’ pun intended:)

If you’re not familiar with SUE the T-rex, 1: book a flight or road trip it to Chicago immediately and 2: spend a day at the Field Museum gazing upon her glorious form. Because the world’s largest and most complete T-Rex skeleton is right here in our own fair city! And fun prehistoric fact: herbivores aren’t the only thing that T-rexes slay at. Check it out:

Good morning to everyone except for Cera from “The Land Before Time.” pic.twitter.com/0gMCBqoj2S

Birds may have evolved from dinosaurs, but this T-rex is slaying the Twitter bird at its own game. SUE’s claim to Twittersphere fame came in the form of a Dungeons and Dragons game the Rex started up fully on Twitter. Like, a full-fledged game.

When a hadrosaur plays Dungeons and Dragons, what class do they play?

It got gloriously nerdy on the science side of things and on the Dungeons and Dragons side of things. And for that, we thank you, SUE.

“I’m gathering a team to perform a ‘Rapid Inventory.’ This countryside is full of diverse bestiary and foliage. I need help.”

Do you perhaps have any expertise in any particular field?

“Oh, that’s fortuitous,” exclaims Olo. “We have many experts on the team, but we need someone to help with taxonomy.”

Olo, strumming his enchanted lute, says, “Perhaps this will explain our adventure a little better…” 🎶

As if by magic, a vibrant moving image shimmers in the air before you… https://t.co/mj8hlHUPqI

You roll a 17. That plus your wisdom modifier (checks character sheet… +3) gives you a solid 20 on your perception check. pic.twitter.com/0gxeyKWuOk

“You’re far too paranoid, my new friend.” Olo continues, “Come, we have much to d-“

JUST THEN SEVERAL BRIGANDS LEAP OUT. But through magical portals, which means you needed to perform an arcana check.

And arcana is modified by your intelligence rating, which as a hadrosaur… isn’t great.

Then most recently, SUE jumped back into a spotlight after a showdown with Merriam-Webster. MW threw some serious shade in the direction of our favorite Therapod.

We’re out of your reach.

This Rex is so worth a follow. Besides DnD campaigns and getting in virtual fights with the sassiest dictionary around, you can also catch hilarious tweets on the daily that mix Field Museum news updates, fun prehistoric facts (and just hilarious prehistoric tweets in general), and epic ongoing hatred towards velociraptors.

When it’s Monday and you need a weekend to recover from your weekend but also you’re not a dinosaur but a “mammal-like reptile.” pic.twitter.com/rt6orGvfOB

“They said I could be anything I want, so I became a venomous umbrella.” pic.twitter.com/ixfZBRYViu

Eric. Stop trying to create beef between @msichicago and I. Just because they wouldn’t let me pretend to be a kaiju on their train display. https://t.co/KOwDKAOThQ

If you’ve never seen a controlled burn, I recommend it. Who knew fire was so important to an ecosystem? https://t.co/JNSyWXAkSL

Follow this glorious twitter account for ALL the lols. And if you’re actually headed to Chicago and want to see SUE IRL, hurry! She’ll be taken down in February for a bit of a bony makeover, so catch her while she’s still greeting visitors in the doorway of the museum.

Don’t have any T-Rex swag to rock? We got you, bb

Featured image courtesy of The Field Museum. Thanks to Chicagoist for the info!