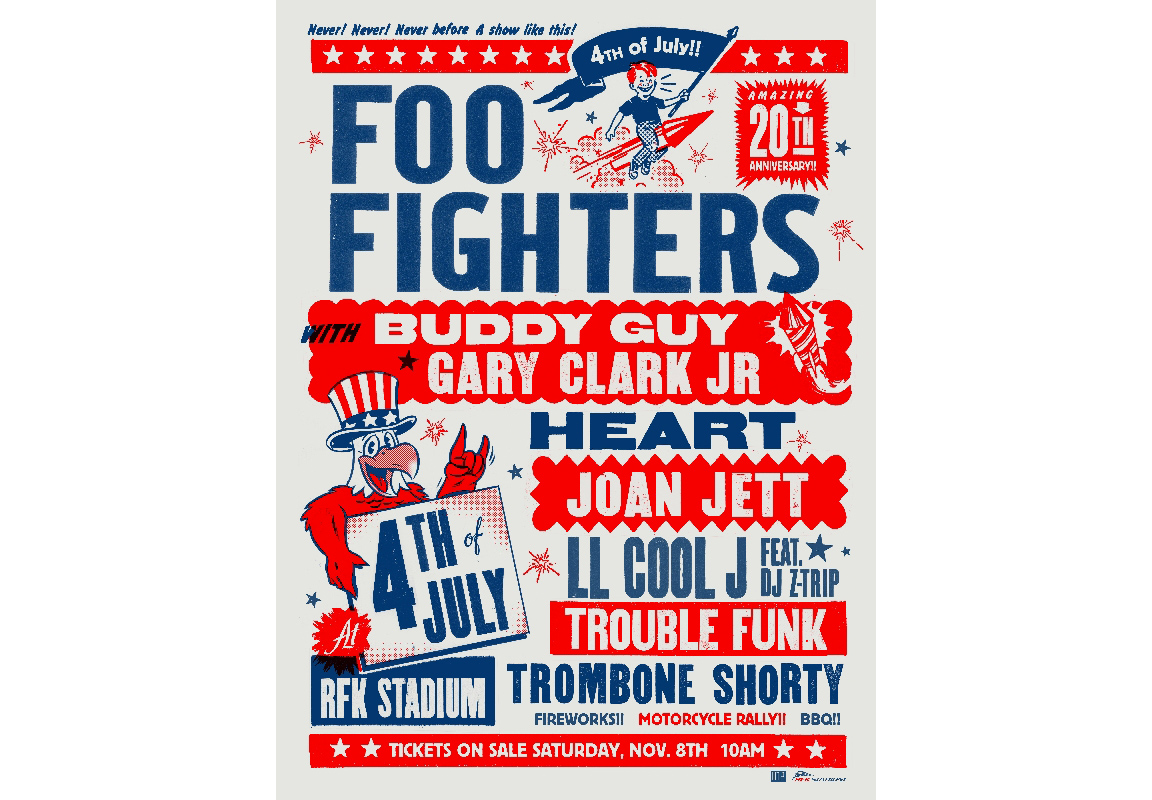 On July 4, 2015, the Foo Fighters will celebrate their 20th anniversary with a star-studded concert in our nation’s capital. That’s quite an accomplishment considering the tragic and sudden demise of Dave Grohl’s other group, a little band named Nirvana. Few could have predicted Foo Fighters’ 8 studio albums, 11 Grammys, and over 10 million records sold – including Dave himself, who claims he would have thought of a better name if he’d known the band would last this long.

Nevertheless, Foo Fighters (a term used for UFOs during World War II) have earned the right to be a little nostalgic. In fact, as this year’s Record Store Day Ambassador, Grohl even went so far as to release some of the band’s earliest demos with a 4 track EP, Songs from the Laundry Room.

Following their lead, I’ve decided to highlight some of their posters. For the sake of structure, I’ve divided the years into three groups, determined by albums and overall aesthetic. This is by no means a “best of” list, but instead an evolution of the band’s posters and the artists that helped create them.

Initially, the Foo Fighters embraced the sci-fi/alien theme. From the name of their record company, Roswell, to the space-aged gun on the cover of their debut album, it was all in good fun, and the posters played along.

Designed by Chris Shaw and featuring flying saucers and a glow-in-the-dark finish, the above is one of the band’s earliest posters, created for their show at the Fillmore Auditorium only three weeks after the release of their debut album. Unbelievably, this poster is still available for purchase right here.

The inclusion of Chris Cooper’s poster above for their show at the Palladium in ’96 is the first of many instances where the band has worked with highly-regarded, award-winning artists. COOP, as he is widely known, also worked on one of Nirvana’s final posters for their show in December of 1993.

Even with the release of their second album, The Colour and The Shape, the band found it hard to shake the extraterrestrial concepts with this comic book-inspired poster by David Dean for their show at Cain’s Ballroom in Tulsa.

As the band hit the middle section of their discography (One By One, In Your Honor, Skin and Bones), the music industry had lapsed into a free fall with the emergence of Napster and other file sharing services. Limited resources meant fewer posters, co-headlining tours with Red Hot Chili Peppers and Weezer, festivals, and dare I say it, generic posters based on the band’s album art.

On October 19, 2002, days before the release of their album, One By One, the Foo Fighters played a special show at Chicago’s Metro. I was there. It was amazing. The poster? Not so much… Trading white for red, the poster is almost identical to the album cover, including the sketched heart and font.

It wasn’t all bad, though. The band hooked up with Jermaine Rogers to create this beautiful poster printed on black Speckletone paper. Offering a glimpse of things to come, including more work from Rogers.

2006 saw the Skin and Bones tour, which featured an extension of the acoustic music featured on the second half of In Your Honor. The band played smaller venues, including some of the finest theaters in the country. Unfortunately, the posters missed their mark, simply using the lettering and artwork of their most recent album.

Chart-wise, the Foo Fighters have experienced their most successful years with the last trio of records: Echoes, Silence, Patience & Grace, Wasting Light, and Sonic Highways. During that time, Dave Grohl has become an elder statesman working on documentaries almost as much as music. His passion for telling the story of Sound City and the musical roots of certain U.S. cities has sparked a return to rock. And, even better, a slew of fantastic posters.

There’s that guy again, Jermaine Rogers. His poster for the Foo Fighters’ two-night stand at the Joint in Las Vegas is one of the most sought after posters for collectors and fans alike. Rogers’ trademark bunny recreating David Bowie’s Aladdin Sane album cover has nothing to do with the band or the venue, but frankly, who cares?

What’s more rock n’ roll than playing a show with Motorhead and selling a poster made of metal? Absolutely nothing. Emek’s poster for the Foo Fighters’ show in Missoula has three variants, stamped on copper or aluminum. Good luck finding one. The average market price is a staggering $400.

Following the release of Sonic Highways, the band has already played a number of shows in support of the new album, including stops in Chile, Australia, and New Zealand. Rhys Cooper’s poster for their show in Melbourne is stunning in person. Limited to 300, the 5-color print uses metallic inks expertly. Not a fan of red? Cooper created an identical print for a New Zealand date using blue and silver. Both are available here.

So what does the future hold for a band with two decades worth of hits? Over 50 concerts across the globe through the end of November, which of course, includes a lot of posters. Who here plans to snag one?