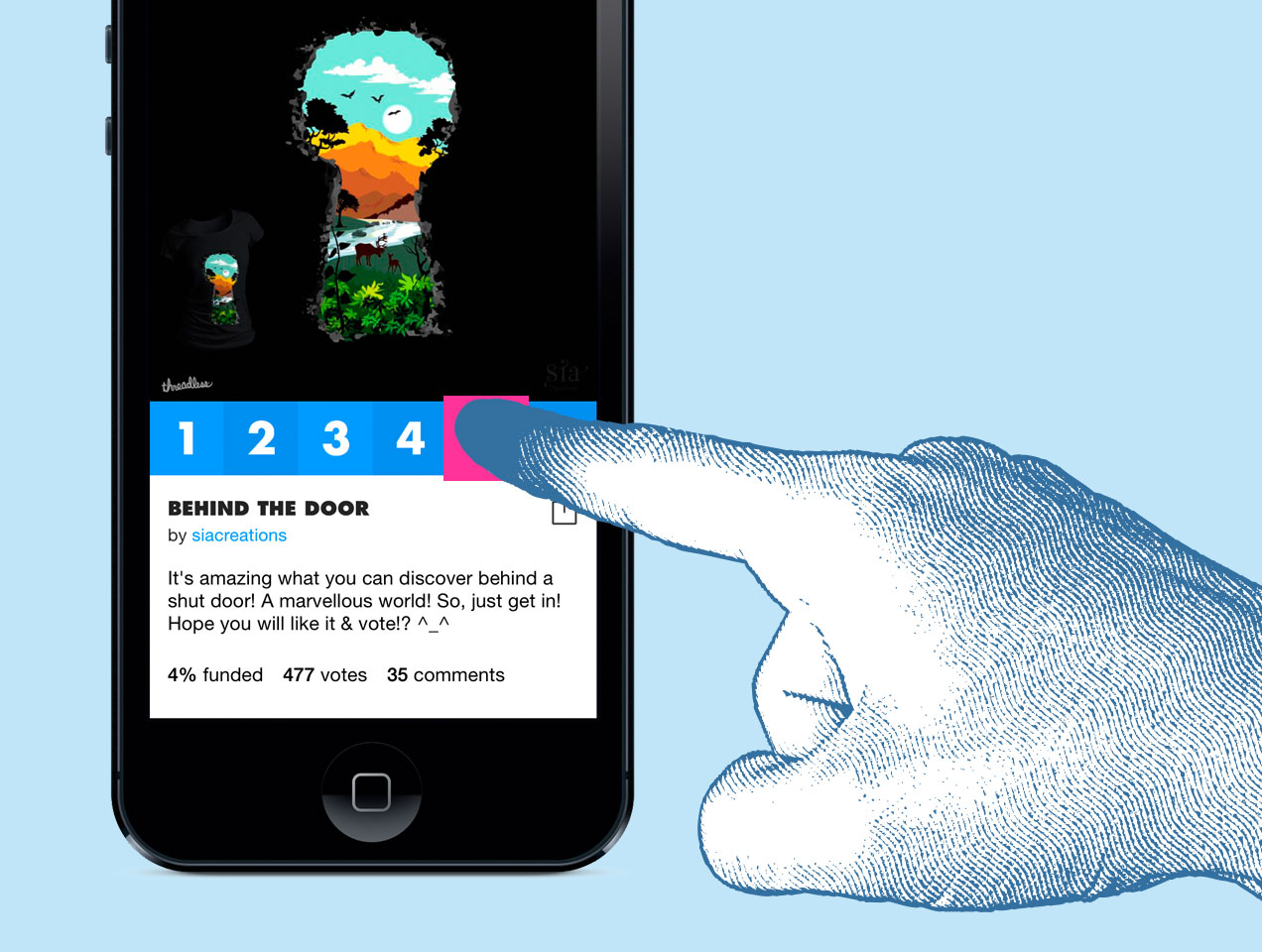 We heard your feedback and are super excited to announce that 1-5 scoring is now available in the Threadless iOS app!

The Beginning:
When we launched the first version of the app, the necessary APIs weren’t yet built for 1-5 scoring. Releasing the app without scoring wasn’t an option, and we didn’t want to delay release, so we looked into alternatives. After playing with a bunch of ideas, we landed on the familiar thumbs up like button. This was a simple, efficient scoring method, but we quickly learned that it wasn’t the best interaction for the long haul. Community members voiced a desire for more granular voting options, similar to the desktop and mobile experience. It was also unclear exactly how these likes factored into the overall design selection process. We crunched the numbers, captured the feedback and set out to solve the problem in a new release.

The Prototypes:
We began by rethinking how scoring could work within a mobile operating system, hoping to leverage gesture-based controls in a sleek UX. Sadly, we found them clunky and difficult to perform on larger iPhones. Check out some of the early prototypes below.

“Swipe to Score”
Interaction: Swiping a finger across the image to vote. Problem: This gesture doesn’t play nicely with scrolling. Scrolling led to accidental scoring.

You can tell I am having trouble with the scoring vs scrolling here.

“Press and Hold”
Interaction: Tap and hold the submission to present the scoring options. Lifting the finger then selects the score. Problem: This interaction proved overly time consuming and a bit clunky.

“Quick Score v1”
Interaction: Tap the score on the number pad and the screen auto-scrolls to the next submission. Problem: Scrolling through the feed, it becomes difficult to know which submission is being scored.

“Quick Score v2”
Interaction: Tap a button to be brought into a dedicated quickscore mode. Problem: Having two separate scoring feeds isn’t great. We needed to combine both quickscore options to make something better.

And finally…”The Chosen One”
Moving the scoring options below the submission and above the title ensured ease of use on all phone sizes. Auto-scrolling to the next submission helps keep scoring quick and easy.

Why now?
Scoring designs helps float great work to the top of the feed, and it helps us know what we should print! Hopefully having 1-5 scoring within our iOS app will allow you to do that more easily. This new version is now available for download in the App Store. Check it out and let us know what you think!

Director of User Experience at Threadless