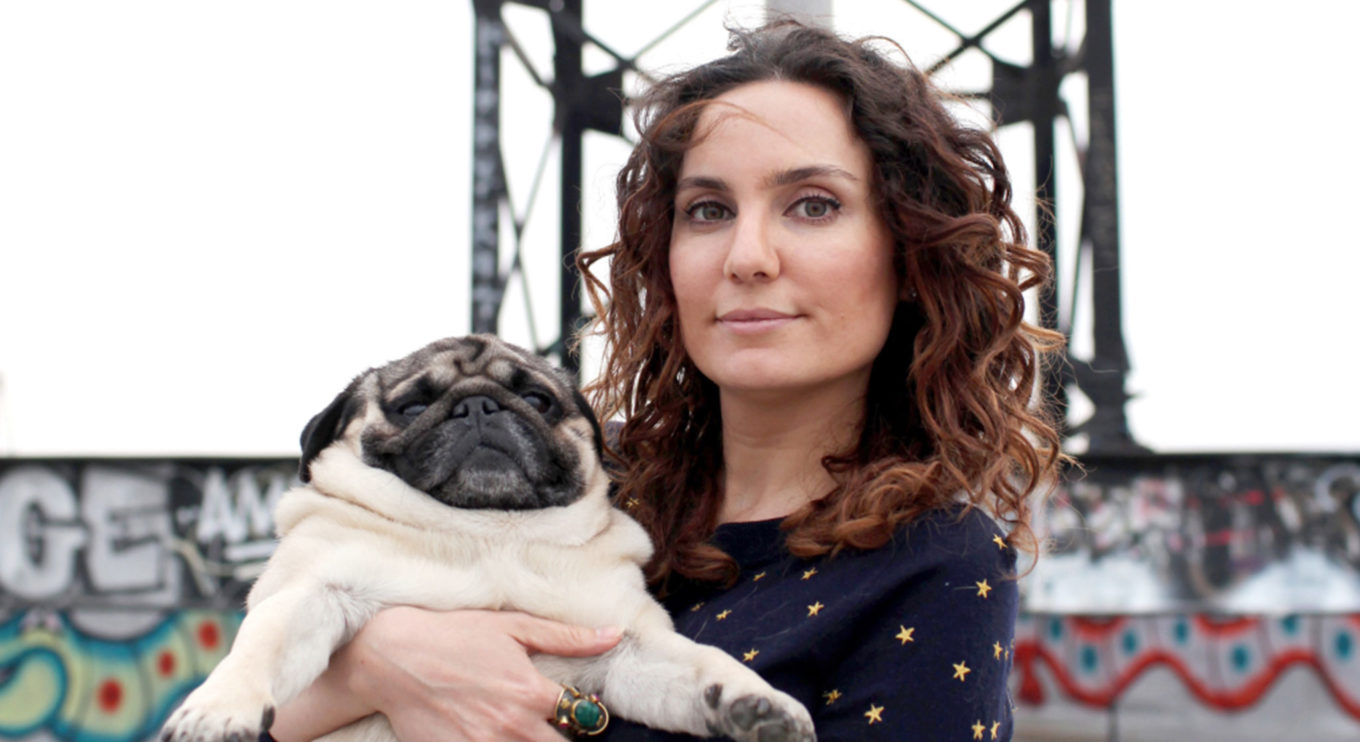 Gemma Gené is a dog lover, obviously. The New York–based artist loves dogs so much that she uses her digital cartoon series, 157 of Gemma, to retell her day-to-day life alongside her pet pug, Mochi. He’s a dog whom she calls “chubby and opinionated,” and has two rescued brothers, Huey and Duey—also known as the Twinchies. The ongoing series, which also features Gemma’s husband, Peli, tells the ups and downs of life with dogs, from going out on walks to the trials of sharing a bed with three fur babies.

As proven by the popularity of her cartoon series, Gemma has a knack for capturing the most hilarious moments of her life with Mochi, something many dog owners can relate to. But she could’ve never predicted her career as a cartoonist taking off the way that it did. Born in Barcelona, she grew up drawing anything she could think up. Her imagination-fueled doodling followed her to architecture school, where she created 157 of Gemma in 2012, and later to New York, where she worked as an architect and visual artist.

In 2014, she began drawing Mochi during her subway commutes to and from work. After posting her drawings to social media, her hobby grew into a business. She gained more than 300,000 followers on Instagram, and has since opened her own Threadless Artist Shop, where she sells her Mochi-inspired illustrations on products including phone cases, pillows, face masks, and socks. Gemma also plans to release her forthcoming book, Living with Mochi, through Andrews McMeel Publishing on April 6, 2021.

What’s great about Gemma’s cartoon depiction of Mochi is that it captures the cuteness of an emoji, but expands on it to take a life of its own. Instead of seeing the same pug over and over again, we get to watch this adorable character grow over time, which is just as addictive as hitting the “like” button every time you see a cute animal on social media. From her studio in Bushwick, Gemma talks to us about the origins of 157 of Gemma, her forthcoming book, and why she can’t resist saying “no” to Mochi.

When did your cartooning really take off? You were drawing while studying architecture as an undergrad, but then it became your career at some point.

Gemma Gené: I was working on my thesis and I was so done with architecture. I was so bored. I wanted to do something more fun and creative, so I started drawing about my life, which quickly became all about Mochi. Then, I moved to New York and started working for an architecture office. Again, I started getting bored and wanted to do something more creative. I needed Mochi so much during the day, and I would draw him because I missed him so much. I started posting my drawings on Instagram and people were responding well to them. So, I just kept it going. But at some point, I realized cartooning was what I wanted to do full-time, and here we are. Mochi is eight years old now. Time flies!

Did your success as a cartoonist start on Instagram?

It definitely started on Instagram. We also opened an online shop we didn’t like so much, then moved it to Threadless, which is great. People just want all kinds of stuff. When we attend pug meetups, we find people wearing our t-shirts and using our phone cases, which is very cool. The first time ever, we were spotted in public! It was in an airport, actually. The girl took a photo of Mochi and had a Mochi phone case, which was very cool. People just want to have something.

How did you grow your audience?

It grew gradually. We didn’t go viral. It was a matter of just posting regularly—not every day—but creating the same kind of content. But now that the algorithms are changing, it’s more difficult for people to find your posts and they don’t perform as well. We’re just trying to adapt as we go along. We found that when we posted a lot of stories on our Instagram, we lost a lot of followers. So we post less stories on our main account and have a private Instagram account for our stories. You have to keep adapting to the situation.

That’s a lot of work!

Do you spend more time drawing or on social media?

Do you have any comedy cartoon heroes? What inspires your style of comedy?

I love the cartoonist Sarah Andersen, Garfield, The Simpsons, Pinky and the Brain, and Fowl Language comics by Brian Gordon.

There’s a sense of innocence to your comics. Is that intentional?

Yes, it’s intentional. It’s funny because the comics I follow are edgier than what I do. But I’ve been toning my work down, and I realized Mochi is more for all ages. Even in the book I’m working on that’s coming out next year, I changed a few things so everyone can read the book. Even little kids. I did that because when I released my first book, I realized a lot of kids love it. It’s not specifically for kids, but I tried to make it so everyone can enjoy it. Of course, there’s always potential to offend someone, and a part of humor is being a bit mean, if you will. There’s always someone who will be upset. But I try to make my work as friendly as possible.

What’s the name of your forthcoming book and when does it come out?

It’s called Living with Mochi and it’s coming out on April 6, 2021 with Andrews McMeel Publishing. It’s an addition to the Spanish version that I already published, but there are new exclusives. It includes a never-before-seen chapter and a bunch of stickers, too.

What is it about pugs that you think is so special?

I personally think pugs are so adorable. It’s a fact that when babies are born, they have big eyes and are round, which makes you take pity on them and want to take care of them. It’s how nature works! When you love a pug, it’s the same thing! They have these big eyes. They’re soft and round—but they’re fluffy. They make cute noises. Their personalities are amazing. I’ve never met an aggressive pug, or a pug that isn’t friendly. Not everyone falls in love with them, but they’re always sweet.

What’s the secret to being a good dog mom to a pug?

The secret is just to let yourself go. When you get a pug, you think you’re getting a dog, but it’s something so crazy. Pugs have mind control and they’re going to make you want to do whatever they want. My advice is to not fight it and just go with the flow.

But you have to still discipline your dog right? You can’t give him your sandwiches all the time!

When did your other two dogs come along?

It was three years ago, if you can believe it. I was at a point in my life where I loved Mochi, but I really wanted a cat. So I started looking everywhere on all the rescue websites and places around the city. But I’m also allergic to cats—that’s another story. I came across these little puppies who were looking for a home and I thought, “Let’s adopt them!” I thought we’d keep them just for a little while, but they stayed forever. My boyfriend and I fell in love with them. These dogs have made our lives feel so alive, but also so crazy. But yeah, that’s our life now. They’re the opposite of Mochi.

Do you think the Twinchi’s will become their own entity in a cartoon?

I think so. I haven’t really been able to introduce them so much in Mochi’s comics because his fans are so hardcore. All they want to see is the pug. But the Twinchi’s have their own fun and their own craziness. I want to show them, too, and I feel that people want to see more of them. They’re so strong, they need their own TV show. I want to make something more specific to them. I’m working on an animated cartoon right now, that will show more of the Twinchis. They are the bomb.

Have you ever done animation before?

Never! But it’s been a dream of mine since the very beginning. Now that I have the idea, hopefully I can start working on it more. And hopefully soon—and I mean in a few years—I’ll have my own animated TV show.

Regarding meetups, do you get a lot of people asking to meet your dog, Mochi?

We don’t do one-on-one meetups, but we drive to Boston and Washington to do pet meetups and PetCon, where people can come and meet their favorite Instagram dogs. We’ve done Los Angeles and Barcelona, and we also go to pug meetups with more than 30 pugs. We also love meeting our fans. I think one of the meetups had 50 dogs. It was so much fun. Pugs everywhere!

Do you think women are getting more attention in the comics world?

I think there’s a lot of women cartoonists, but historically, it has been male-dominated. But there are so many amazing female artists doing amazing work. I started late in the game, so I didn’t feel like it was a male-dominated world. I feel like we’re taking over—same with everything. Women are taking over.