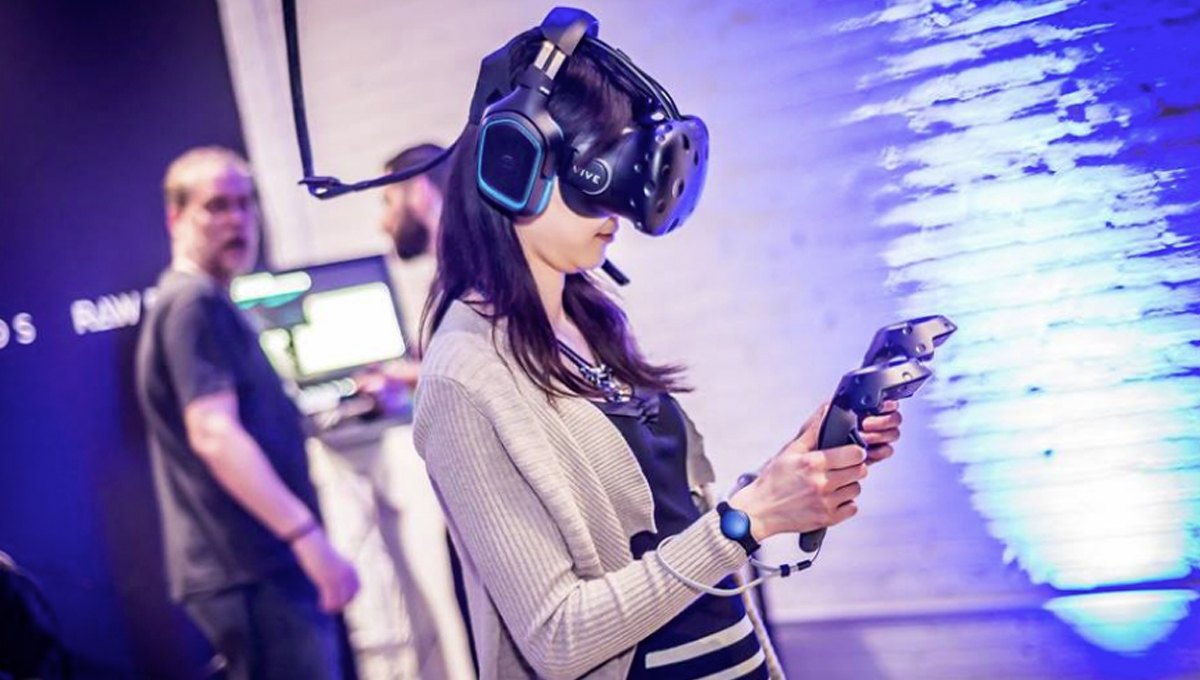 Just as it was crucial to have at least one friend with a Nintendo 64 in the ’90s, nowadays it’s crucial to have at least one friend with a VR mask. Virtual reality is the future of gaming, and LA-based company Survios is one of the companies trying to make that future a little smoother, a little more immersive, a little more awesome. And with the motto “making games more human”, their goal is to make VR more immersive while also keeping it social and engaging with emotion and physical movement. We talked to Survios about the games we’ve created so far, how they’re adding a physical element to gaming, and about the Artist Shop they just opened up. The future is here: find out more about it!

Tell us a little bit about Survios and how it got started!

Survios got its start as a student research project at the University of Southern California called Project Holodeck, where our co-founders met. They all had a shared philosophy for virtual reality gaming that was based around physical room scale gameplay, full avatar embodiment, and multiplayer social interaction. We officially founded Survios in 2012, quickly filling up our small offices with talented, passionate developers who all believe that VR is the medium of the future.

We’re all a bunch of huge nerds who just love what we’re creating every day! We have a casual office where dogs run around freely, there’s a bottomless stash of Red Bull, and there’s always something cool going on: yoga, movie nights, massages, board games…we spend a lot of time in front of our screens, both in monitor or headset form, but we also make the time to be humans together.

What games have you created so far?

Survios’ first title – the sci-fi action combat experience Raw Data – recently came out for PlayStation VR, HTC Vive, and Oculus. You play as one of four heroes, each with unique weapons and abilities, to take down a malevolent megacorp and kill hundreds of robots in the process. You feel like a badass taking out enemies by slashing a katana, charging with an iron fist, sniping with a bow, or unloading several clips’ worth of ammo into them.

Currently, we’re gearing up our second VR game, Sprint Vector; a colorful adrenaline platformer that drops players into the middle of an unhinged game show. You have to race, climb, leap, and fly at extreme speeds across crazy challenging obstacle courses while fending off opponents. Sprint Vector is a totally new experience in VR; fast movement was always a no-go until we developed our unique Fluid Locomotion System, and we’re stoked for everyone to play it and feel the rush!

A lot of people are hesitant about VR because it seems very cold and isolating, in theory: putting on a headset and headphones and immersing yourself in a wholly virtual world. But we believe that VR ultimately has the potential to make us feel more human by engaging with our emotions through physically active, socially engaging gameplay. That’s why we’ve always focused on multiplayer games designed to evoke parts of our brains that we might not otherwise experience. With Raw Data, that was survival fight-or-flight instincts, while Sprint Vector will give players the awesome sensation of being an extreme athlete. The gameplay is also designed to work with this. In Raw Data, you actually have to swing your arm to use the sword, draw back on a bow to loose an arrow, pump a shotgun to reload it, or punch forward to deliver a blow. It all draws you deeper into the game, and it gets even more real when you have a friend with whom you can interact—we love how many people immediately want to high-five or fist-bump each other when they get into a shared VR space together.

Tell us a little bit about the designs in your Artist Shop!

Currently, our shop features designs that we initially created for our employees or as exclusive designs given away as contest prizes, in press kits, or at events like Game Developers Conference and E3. We’ve received such great feedback and interest in them from our community that we wanted to make them available to everyone so they can proudly rep that they spend time straddling two realities!

I love the “Women in VR” design. What inspired it?

One of the awesome aspects of the VR industry is its opportunity to reclaim parts of gaming culture generally considered to be negative or even toxic. Survios has long been a friend of Women in Games International (WIGI) to encourage women to pursue their passions in the gaming industry. The Women in VR design came about last year when we hosted a WIGI panel on pioneering women in virtual reality at our company HQ in Los Angeles; the Survios women wanted to stand out with a statement shirt that showed off our commitment and solidarity with women in tech and the uphill battle they generally face. So our graphic designer whipped up this awesome, modern design for us all to wear at the event (the lips are actually colored “Survios blue” as a quirky nod to our company’s enthusiasm for the medium). We’ve had so many people react positively to the design that we wanted all women who love VR to be able to show it off!

How do you go about developing a VR game? It seems like planning the landscape would be so much more involved!

VR has so much going for it in terms of physical and mental engagement that when we start planning a game, we always start with an emotion: what do we want our players to feel when they get into the game? And we go from there! If you want to learn more about Survios’ VR development process, we actually just released a three-part mini-documentary on The Making of Raw Data. It goes more in-depth into the unique technical and creative aspects of building a VR game through footage, artwork, and interviews with the devs from every aspect.

VR is still such a newly accessible way of gaming – where do you think it’s headed? What part does Survios want to play in the future of this medium?

In terms of where VR is headed, nobody really knows, but that’s the exciting part: right now, VR is still such a nascent medium with so many unexplored areas that it’s more about experimenting with what we want it to be. Survios is all about being bold and trying out things that you supposedly can’t do in VR. For example, when we started developing Sprint Vector, everyone in the industry was convinced that doing high-speed locomotion in VR without triggering nausea was impossible. So, we came up with a game that’s all about racing/flying/climbing/dropping at crazy speeds and developed a totally new movement system that makes it comfortable for almost everyone who’s played—and completely defied industry expectations in the process.

Survios is also positioning itself to be an ambassador bringing VR to the mainstream. To this end, we believe that VR arcades are integral to getting everyone to try VR, and we have a team dedicated to nothing but developing partnerships with arcades at all levels. We highly recommend checking out your local VR arcade to play all of the awesome experiences they have on hand (which will probably include Raw Data and Sprint Vector)!