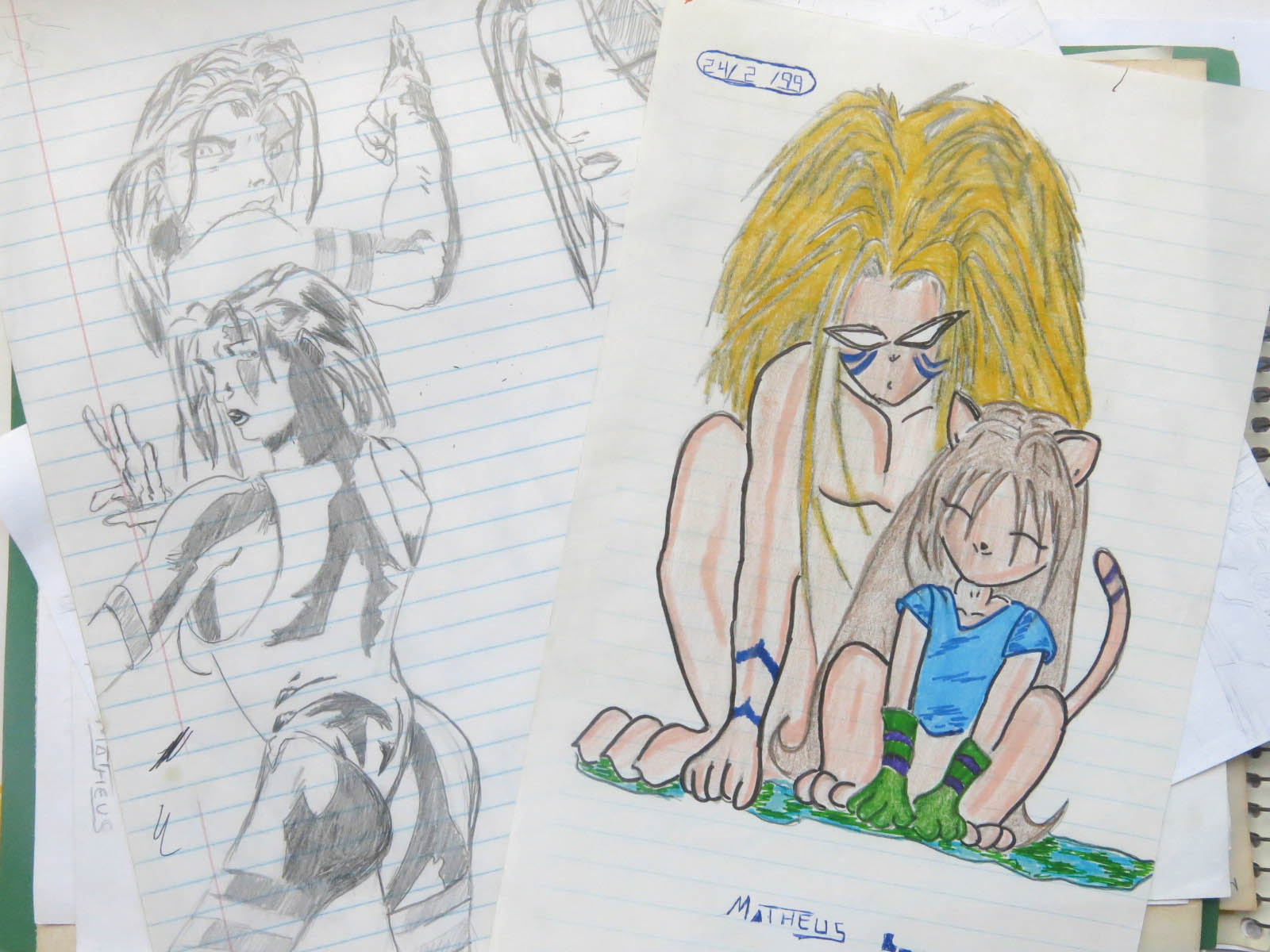 Mathiole is my brother. I wanted to clarify this up front, in case you’re wondering how on earth I have his childhood drawings. The funny thing is, when we were growing up, I used to draw a lot more than he did. Somewhere along the way (mainly because of a Spider Man comic book) it all changed. He fell in love with images, and I with words. Regardless, knowing where he is today, and his presence within the Threadless community, I can’t help but share these drawings he made in his early years.

Thank God for our mother, who always saved every little note, article, school report, painting, and drawing from preschool to high school to college. Looking through all these materials, I discovered that Matheus (yes, Mathiole is a code name!) harbored a talent since the beginning, particularly with color. And, although he wasn’t much of a doodler as a child, he was obsessed with Legos and loved designing cities, cars, and spaceships with the pieces. Mom agrees: “Throughout his whole childhood, Legos were the only possible birthday or Christmas gift.”

He recalls the exact moment when illustration became a true interest to him. “My friend Anderson was a fan of comic books,” says Mathiole. “I was about 15 years old when he came over with Spider Man, saying it could be fun to try to copy the cover.” From that point on, my brother started to draw superheroes constantly. Shortly thereafter, he asked my parents to join Casa dos Quadrinhos, a famous local art school.

I remember the day we first visited the school with our dad, who brought a briefcase of my brother’s drawings. Distracted by school’s incredible art everywhere, I couldn’t tear my eyes from walls filled with painted characters, but my dad says that all the students gathered to see my brother’s portfolio. “I came out of there feeling like art was Matheus’s calling in life,” he said.

They accepted my brother. However, the school year had already began, so he joined an interim supplementary class. He later enrolled in the regular classes. “I suffer the consequences of that to this day,” says Mathiole. “Since I had to catch up afterward, the teachers rushed through some subjects, such as drawing anatomy, which I still haven’t quite mastered.”

The course at Casa dos Quadrinhos lasted two years and ended before college. At Fumec, the university where he studied graphic design, he discovered Camiseteria, a Brazilian site like Threadless, and that’s when he started doing t-shirt designs.

I’m amazed by how far my brother has come. Besides being an artist, he is also an entrepreneur, managing his own studio Verso with Rafael Bastos (Vó Maria) and Haffael Pereira. Next, he plans to create his own store in an “on demand” platform.

To date, he’s submitted numerous designs to Threadless, and won several challenges. Here are some of my favorite designs of his, which really show the range in his style:

Mathiole still does the occasional freelance job, but his biggest dream is to work only for himself. Since I know him the way I do, I’m sure the wind will blow in whatever direction he desires. And I will be here, cheering as always, watching as he discovers new seas.