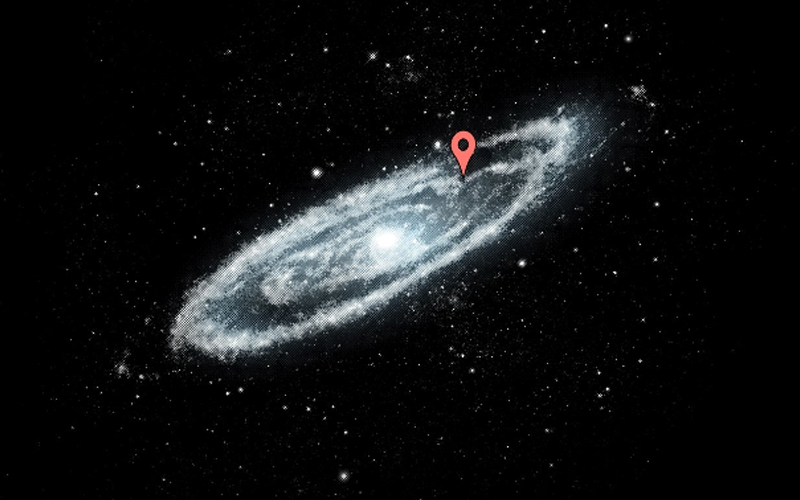 So you may have heard about this little movie called Star Wars: The Force Awakens that just came out.

I’m sure some of you were decked out with your light sabers and Jedi robes for opening night. I should know, ’cause I have…um…”friends” who have been showing off the Star Wars-themed tees and sneakers that they’re planning to wear to the movie.

But not everyone has returned to that galaxy far, far away yet. And out here on the internet, there be spoilers. So if you still want to get your space fix, consider this the metaphorical tauntaun you can curl up in to stay safe from spoilers while checkin’ out what’s going on in our own galaxy (and just beyond). Because there have been tons of new discoveries that are as exciting as this new film coming out. Really.

Not convinced? Check it out:

Pluto has some rad terrain!

Ever since the whole “New Horizons has finally reached Pluto after 10 years YAYYY” thing, space news has been all about Pluto for a while. I mean, it IS a really big deal to finally see what the little guy really looks like, right? And based on the new images New Horizons has recently sent back, it’s clear Pluto has some cool stuff going on.

It may not be a planet anymore, but that doesn’t make it any less awesome. See Pluto in all of its glory in this mini movie by NASA.

The Japanese are checking out Venus!

It looks like we’ll also get to see a closer look at Venus really soon.

Japan’s Akatsuki probe successfully made it into orbit around the planet Venus just days ago. This was Akatsuki’s second chance to rendezvous with Venus after missing its first attempt back in 2010 due to an engine failure. The probe had to orbit the sun for FIVE YEARS so it could catch up with the planet again. Talk about chasing Venus.

And now that Akatsuki has made it, it can start learning more about the planet and its cloud layer, its thick and toxic atmosphere, and its incredibly hot – as in, can-melt-lead hot – surface. Akatsuki can also start checking for possible volcanic and lightning activity in Venus to see what makes Venus tick.

Tanya is out there far far away and she’s super faint, you guys.

Who or what the heck is Tanya, you ask? Tanya just happens to be the faintest object ever seen in the earliest universe.

The astronomers who detected the object nicknamed this ultra faint galaxy Tanya because why not? Well ok, actually the name means “first born” in Aymara – a language spoken in some regions of South America. Kind of fitting because the scientists estimate Tanya to have existed 400 million years after the big bang 13.8 billion years ago.

Though it’s not the first time that super-duper far away galaxies have been spotted, Tanya represents a smaller and fainter class of newly-forming galaxies that were previously undetected. Tanya could give us new insight into how the first galaxies formed or evolved. Neat, huh?

When I hear the words “black hole devouring a star,” I usually think of
deafening, crunching noises as a giant fiery object gets sucked into a massive hole of nothingness. And it happens in mere minutes. You know, like what we see in the movies?

Well, now a group of scientists at John Hopkins can tell us the real deal. The group has observed a supermassive black hole swallowing a star and the event unfolded over a few months, apparently. They were able to track a star that slipped into the gravitational pull of the black hole and was sucked in. The unlucky star was first discovered in December last year and the scientists were able to whip out all their radio telescopes in time to catch the epic nomming in action.

The photo below above an artist’s conception of a star being sucked into a black hole and destroyed, and the black hole spewing out a “jet of plasma” composed of debris from the star.

You can now own asteroid property!

The bill basically recognizes the rights of U.S. citizens to own any asteroid resources they manage to extract from space. It’s kind of all about “encouraging commercial space exploration and utilization of asteroid resources.”

Of course, not everyone is ecstatic about this bill and concerns were raised over commercial harvesting and appropriation of asteroids and space objects.

Either way, this new bill will definitely stir things up when it comes to space ventures.

Freelance writer and casual blogger. Likes to hoard books, but only occasionally reads them.