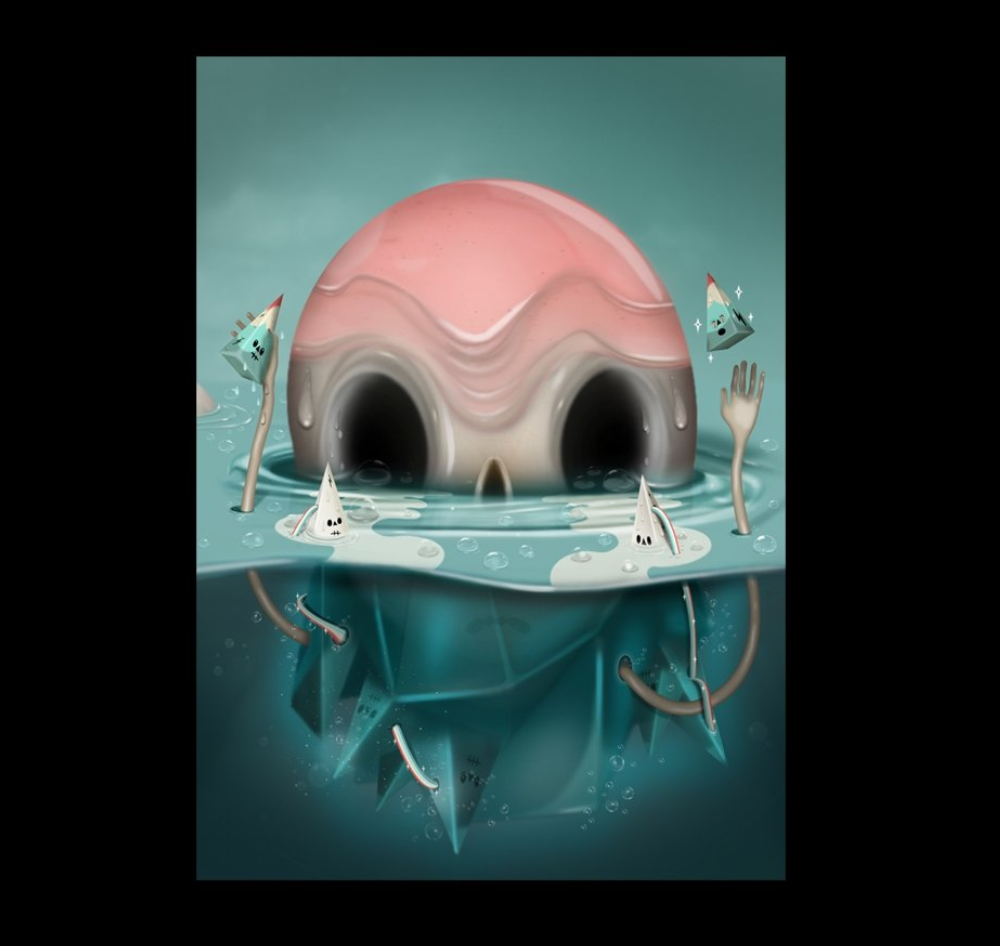 There are certain pieces of art so beautifully unique that it’s hard to look away. You get caught up in staring, trying to figure out the story behind the picture. And the winner of our wall art challenge, Sergio Millan, created a piece that is absolutely captivating.

From “Koldinur’s” Tara McPherson-esque cotton candy pastels, to its mix of surrealistic cuteness and downright darkness, the aesthetics of Millan’s piece are as pleasing as they are curious.

We talked to Sergio Millan about his story behind the piece, the artists he’s inspired by, and his first Threadless win. Check out the interview below!

Throughout my entire childhood I loved drawing, it really was my first passion. But an experience with my first – and also horrible – oil painting made me abandon art altogether. So I began to develop an interest in cinema. After a few years I fell in love again when I began to work as a sales assistant at a Fine Arts Shop. Back then my illustrations were a little bit childish, but at the same time dark and sinister. Maybe it’s right now when I am most committed with my art.

There are plenty of things I love to do, like hanging out with friends, watching movies, listening to music, going to concerts, and walking along the city – that’s when I get the best ideas for my drawings. Some friends wanted me to learn to dance swing so I think I’ll do it. It can be hilarious although they’ll make fun of me forever.

Your first Threadless print and win! Are you excited?

Yeah! I’m very excited and also flattered, I wasn’t expecting this award at all. I sent it just to see what could happen and receive some feedback. There were loads of drawings that not only I loved, but I thought were amazing so definitely I was really really happy when I heard the news that I won.

Tell me a little bit about this design! What’s the story behind it?

At the beginning, Koldinur was only a character in a larger work. He remained frozen and still in the middle of a lake between mountains. But I decided to focus on him. I figured that parts of the iceberg where he was trapped were pulling away, acquiring his life and waking up to Koldinur in the middle of that Lake.

I did not do sketches, I was flowing. Only I had clearly wanted to use colors pink, white, blue, and empty ocean.

That’s awesome. How would you describe your art style?

That’s a complicated question, I think that I’m still defining my style. I’ve been trying different forms and techniques  but in a natural way. I’m coming back to my first sketches where spontaneity was mandatory, but trying to give them a more professional and detailed look and managing better the expression of the colours.

One thing that’s clear to me is that I tend to carry the characters to an innocent melancholia. I’m not a fan of the complex, I tend to eliminate details. I love the emptiness in the drawings.

What inspires you artistically?

I’m inspired by old cartoons, music videos, or colors that I find on the street, conversations or when I am daydreaming. By Jiri Trunk’s short films especially because using different types of illumination, he could give his characters faces
of sadness, happiness, or dreaminess, creating the impression that they could hide more than they showed. Nature is also a source of inspiration to me: wood, forest, trees, ocean. And the photographies of Aëla Labbé.

Basically music (post rock without lyrics) is my favourite to inspire me. Some songs can move me big time, so I begin to visualize images, a kind of story in them. I’d love that my drawings could express the same level of emotion that these songs awake in me but I’m not sure I get it all the time.

Who are some of your favorite artists?

I admire many artists, but I think the first thing that caught my attention was the work and the windows of Judith Schaechter. I had the walls of my room filled with reproductions on paper.

How is the art scene in Spain?

There has always been great artists in Spain. If we talk about illustration, I think that some years it is booming and there are recognized illustrators in Spain and in other countries, including Carla Fuentes (Littleisdrawing), Sergio Mora, Ana Galvan, Joaquin Cornellá, Paula Bonet and Ricardo Cavolo, and I left many others.

There is much disparity in the value given to the work of an illustrator depending on the client. Maybe is it more recognized by people rather than the companies or institutions. So I think it still gives more value in other countries…I’m not really into professional level, but I think it is insufficient economic value offered, otherwise in media scene. There are many people working hard to spread the artist’s work.

Only saying thank you for the interview, Carlyn, and the entire team of Threadless. I hope I haven’t bored. And greetings to all the artists that are here.