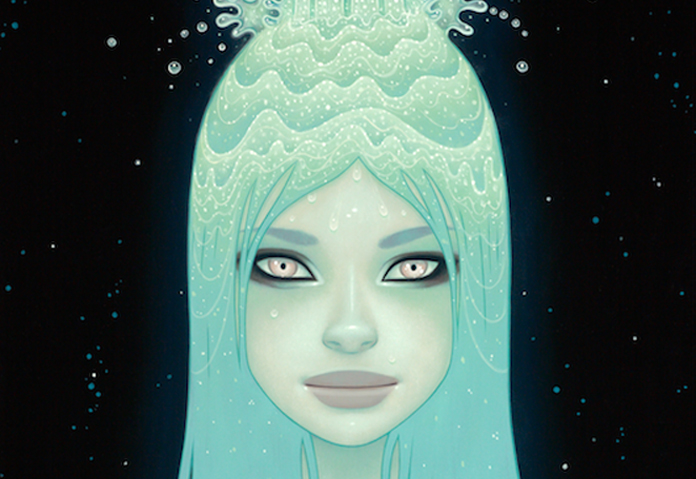 The left brained analytical vs the right brained artist is a battle as old as time…well, human time.

But who says the two can’t come together in harmony and create something beautiful? Tara McPherson has balanced her love of astronomy and passion for art to create a cute-meets-macabre and science-meets-art style all her own. Her unique art has been featured everywhere from galleries to the movie Juno. And now thanks to her Artist Shop, you can rock her designs on your torso.

We talked to Tara about her cotton candyesque imagery and its ethereal and sinister twists that are as beautiful as they can be unexpected. 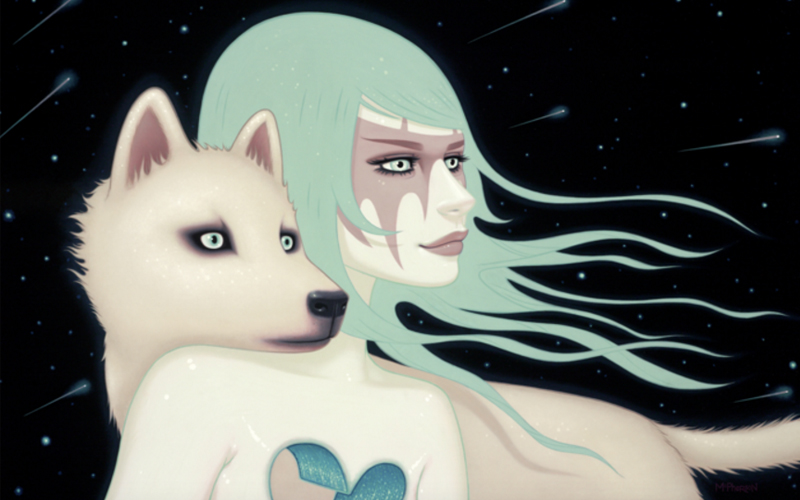 So many of your pieces combine this innocence and bubbly adorableness with beautifully dark or bloody imagery. What does this mean to you?

I like to explore facets of our emotion, with ‘love’ being a primary fascination. Nothing is ever perfect, so to put that in terms with my art, I’m not interested in 100% cute or 100% dark…it’s all about finding that balance between the two that piques my interest. 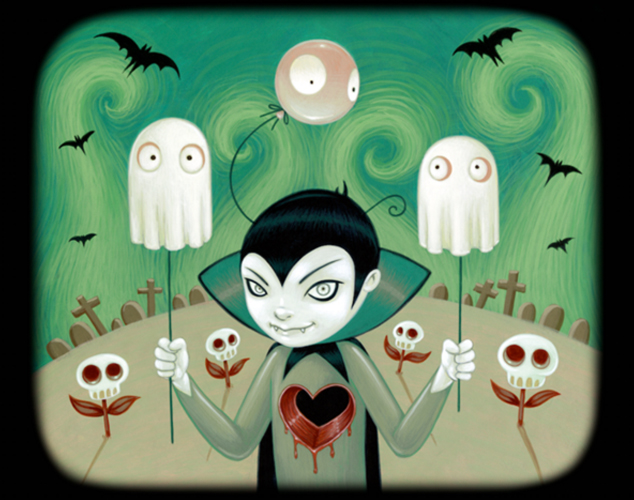 Water has definitely been a huge element in my art. One of my favorite concepts is the path of the water molecule – liquid to gaseous to solid, in an ever-evolving state, and it never ceases to loose its integrity as a water molecule. Mirroring that of the human condition, our emotions take on many forms and evolve through many states of mind, all the while maintaining our true self.

I have a huge fascination with science, nature, and physics. I actually was an Astrophysics major when I started college. Although I realized my true path in life was art, I can still explore my passions within my artwork. 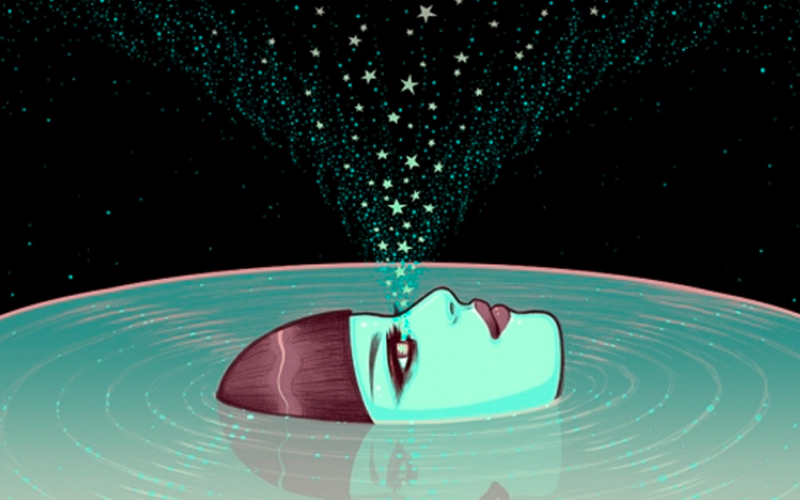 You have some really cool mythology-based pieces. What’s your favorite myth/story/character?

My newest favorite is the Umibozu, a Japanese water demon who sinks ships. He is one of my characters who I see as having a good side as well as an evil side, illustrating the span of human emotion and the range of love and hate we can have: Primarily good, but can really fuck things up here and there.

I was surprised to find that your art is done with traditional painting. Are a lot of people surprised about this?

Yes I hear that from a lot of people thinking my oil paintings are done in Illustrator or Photoshop. Illustrator is actually the application that I know how to use the least!

Time lapse of me painting ‘Borealis’ for my #wandering_luminations show at #jonathanlevinegallery. This Saturday is the last day to see the show!! #aurora #borealis #polarbear #oilpaint

I do use Photoshop to create my poster art, but the lineart is hand-drawn, and the final printing is handmade with acrylic ink on the screen print. Preserving the handmade arts is very important to me, especially in this digital era we are in now. I don’t think you can ever replace something that is lovingly handcrafted. 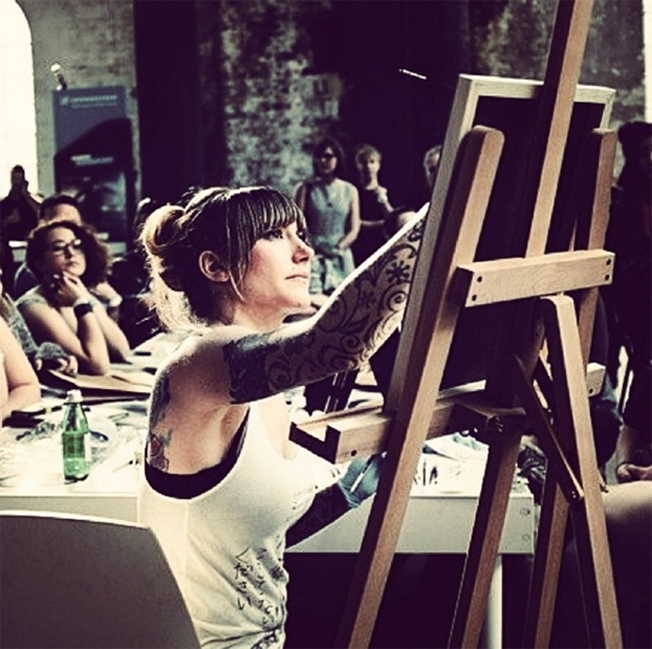 Especially as the digital world advances, I think the ‘analog’ art forms will have an even stronger hold and be held in higher regard for the time and effort it takes to create. At least I hope so! 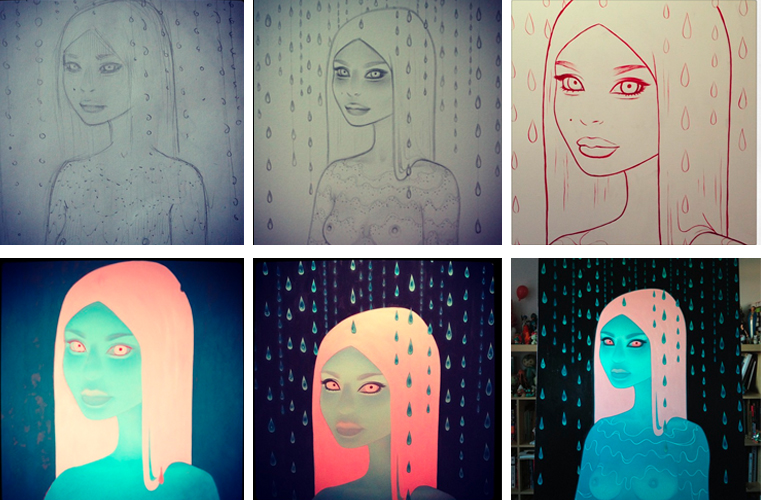 Correct me if I’m wrong, but it doesn’t look like your art has regularly been featured on apparel. What made you want to start?

Yes you’re correct, I haven’t done a lot of apparel at all. Primarily just making them myself, but it’s hard to keep all sizes in stock when you are self-producing. Which is exactly why I thought this was such a great opportunity to do this collaboration with Threadless. Why not team up with a t-shirt company to do what they are best at doing! I think it’s going to be awesome.

Of all the galleries you’ve done around the world, what’s been your favorite one?

I absolutely love working with Jonathan LeVine Gallery. Not only have I shown with him the longest, Jonathan has been key in setting up shows with partnering galleries in other countries as well. I’ve had a huge amount of freedom with my shows, as well as had my largest challenges working on them. 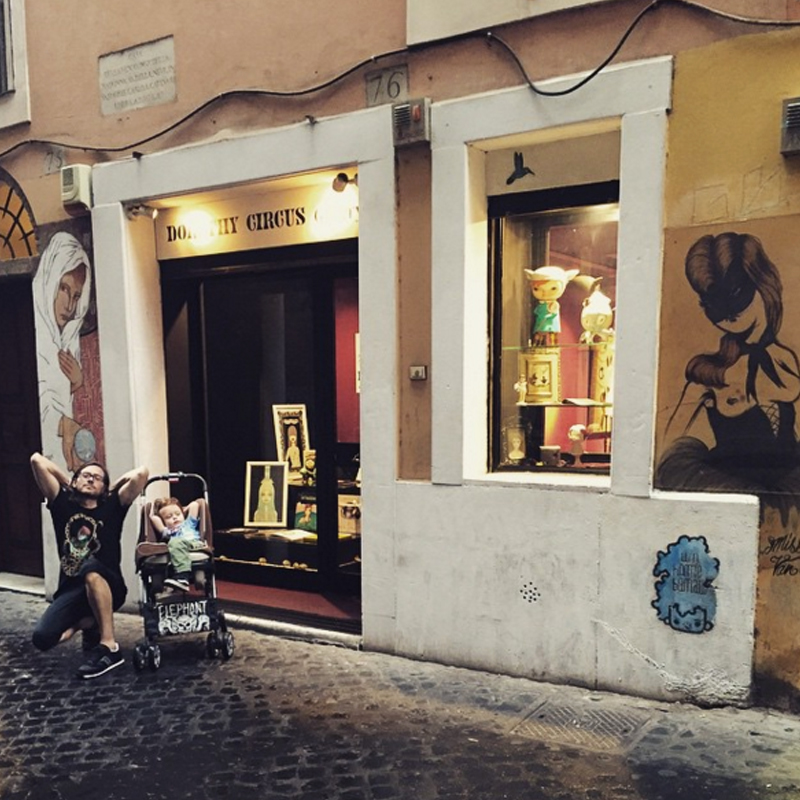 I think if it comes too easy then sometimes the gratification isn’t as satisfying, but when you know how hard it’s been with the stress and sweat and chaos and tears, and you make it happen with love and hard work and late nights, then it’s one of the best feelings on the world.

What was your reaction when your art was selected for “Juno”?

I knew they were using my posters in the film, I just didn’t realize how big of a part they played until I went in to see a screening. And I was blown away!

It was awesome to be thanked at the end of the film as well, I guess that makes up a little for not being paid, haha. But, sometimes it’s good to do pro bono work, it’s not always about the money. That was definitely one of those times.

I saw that you worked on Futurama as an intern! Did you want to go into animation for television?

I did at one point want to, and even took a character design test there, but didn’t get a call back, haha. But then so many other things took off at the same moment I just went with the flow and felt that was fate taking hold of my future. It all worked out so lovely because I don’t think I would have spent so much time on my personal work if I had started a job in animation. 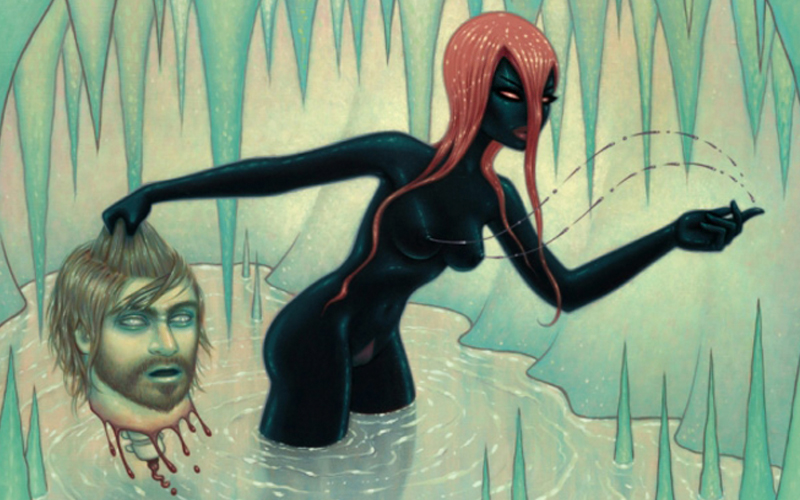 I gotta ask…is the decapitated head in “Lilitu” based on a certain beheaded character from the end of season 1 of Game of Thrones? The resemblance is striking.

No it’s just a made up character. It’s funny though, a few people have said that it looks like a certain person they know. So maybe he encapsulates enough manly-man characteristics that make people think it looks like someone they know!

Have you ever written a comic book? If not, would you ever do it?

I’m not interested in writing a comic book, but someday I would like to write and illustrate a children’s book. Right now, for where I’m at, creating comic book panels are too repetitive for me and it get’s kind of boring. And I don’t want any of my work to be boring! 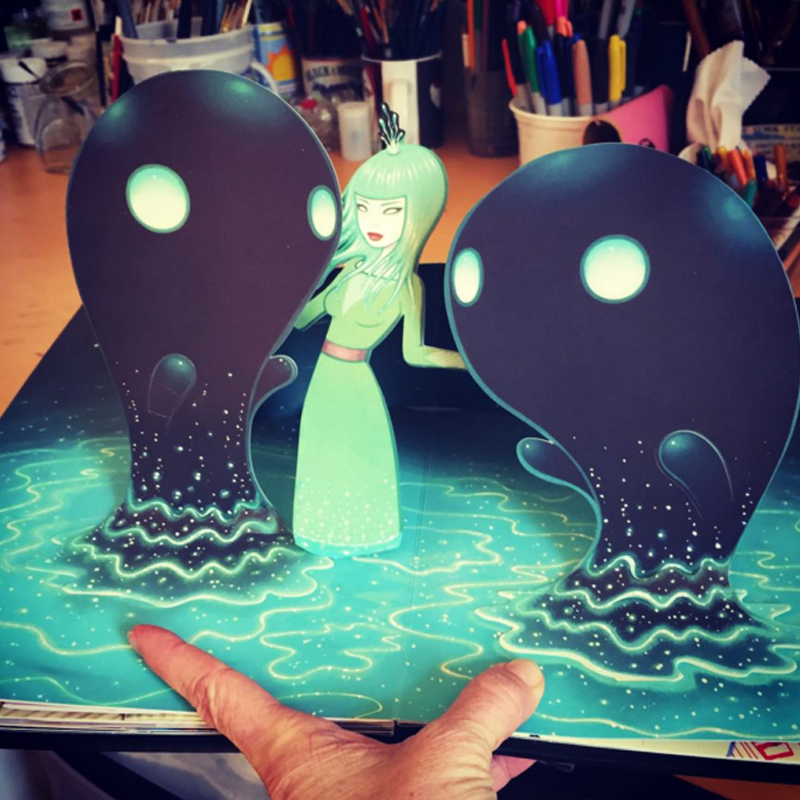 I’d be more interested in making pages for a storybook with one big illustration on each page. I think I’ll get the time to make a storybook in a couple years, so keep on the lookout!