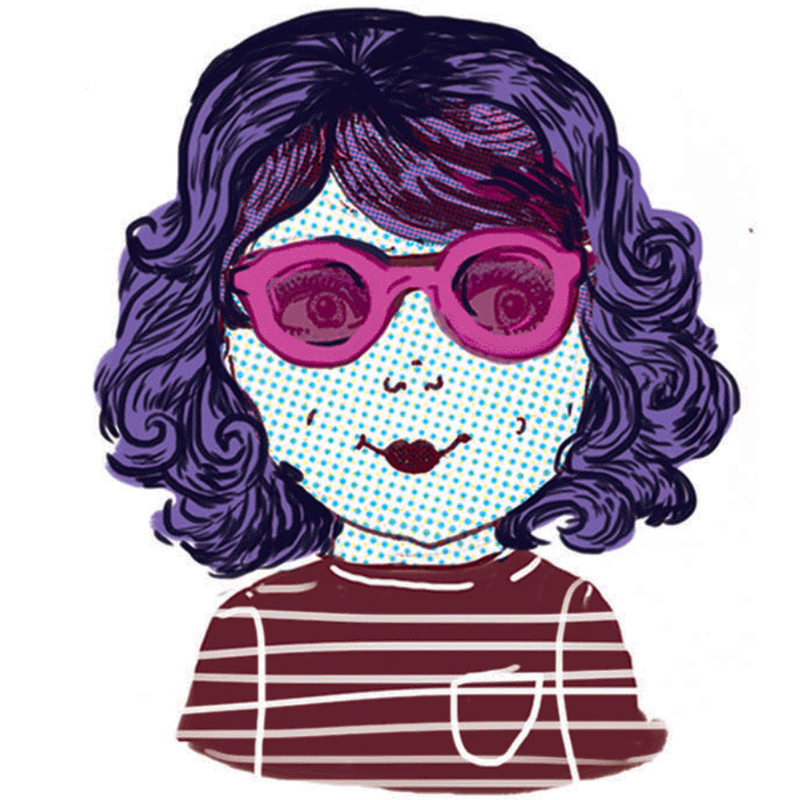 Considering her art has such strong ties to music and pop culture, it seems fitting that artist Kelsey Zigmund has remixed kitsch, ’50s vibes, and rock ‘n roll to create a unique style all her own. Her illustrations are as addicting to scroll through as a song you want to keep on repeat, and have appeared everywhere from indie films to The Washington Post to Barnes and Noble’s site Sparklife. And we’re pretty stoked that now we can wear some of her rad creations on our torsos thanks to her Artist Shop.

We talked to this fellow Chicagoan about her show and zine “Sodashoppe Punk,” what inspired it, and about her brand new Artist Shop.

First, tell us a little bit about yourself and your work!

Hi, I’m Kelsey Zigmund. I’m an artist based out of Chicago. I’m a freelance illustrator and I create graphics for editorial publications and product design.

What illustration job/project have you gotten most excited about doing?

Last summer, I produced a large series of graphics to be used in an independent movie filmed here in Chicago called Olympia. It was directed by Greg Dixon written by McKenzie Chinn, who also plays the main character. It’s a late coming-of-age story and the title character is an illustrator. She’s navigating her way both through the art world and through adulthood in general as she is about to turn 30.

I created series of portraits of the cast that are used in the movie as props and background set pieces, like the main character’s sketchbook and workspace. I’m looking forward to seeing how it comes together on screen! It was a unique opportunity to showcase some work and I got to meet a lot of amazing actors.

Tell me about your collection, “Sodashoppe Punk”! What’s the story behind this collection?

Sure! In short, this collection is my celebration of the music and style of 1960s girl groups. “Sodashoppe Punk” is a term I came up with to describe a popular aesthetic I was seeing in fashion and on the internet—sort of a send-up of the 1950s Greaser/Biker archetype. I was seeing a combination of the masculine and feminine looks of the 1950s and 1960s. Lots of black, lots of leather, with messages of toughness or fatalism or rebellion, combined with a very sugary-sweet, feminine, pastel aesthetic. I saw a lot of kitschy, malt shop-type images coming back with a contemporary spin. Skulls with ice-cream cones. Vinyl records. Saddle shoes. Biker jackets. That sort of thing. I was seeing it in fashion blogs, street-style blogs and I thought, “That’s something I’m drawn to. That’s something I’d like to explore further. I want to create a series using those style perimeters.”

I thought more about what fascinated me about this aesthetic and honed in on re-appropriation of music from that time and its lyrical content and attitude. For this collection, I tried to reinterpret what it is about that musical genre that remains relevant and true today. I listened to 1960s girl groups on repeat in my studio and got really immersed in the hyperbolic, raw emotion of the music. And that’s what “Sodashoppe Punk” is about.

Tell me a little bit about the artbook zine you have accompanying the show as well –  “Sodashoppe Punk, Vol. 1”

I’ve always been attracted to melodramatic music and visual themes. The songs in this musical genre are really direct. Generally, the title of each song is also the song’s chorus and it repeats over and over with a single message: “We were born to be together,” or the other way: “You cheated. You lied. You said that you loved me.” So, when I created the zine, I wrote a song playlist that serves as a sort of a table of contents.

There’s a “Side A” of love songs all about happiness and hope and infatuation. Then There’s “Side B,” which is all break-up songs and all the emotions that go along with that: denial, regret, loneliness.

Some of the songs and graphics are pretty straightforward and timeless – songs from the Ronettes, The Shirelles, and the Shangri-las are full of simple, versatile phrases. Anyone who’s been in or out of love can relate to them, almost the way that traditional tattoo flash has remained very classic and popular. It’s imagery about love and death.

Other pieces are meant to be more tongue-in-cheek, more ironic. Some of the romantic ideals in these songs and the time period they were recorded is somewhat old-fashioned and over-the-top. There’s humor in that. Like when the phrase “Almost In Love” is placed over the top of a bustier or “You’re the Reason,” is placed over a drink cart of booze, it’s meant to kind of poke fun at how melodramatic the material is.

You just started an Artist Shop! Do you have a favorite design in your shop?

Yes, I’m excited to expand my illustrations to apparel. As far as favorites go, I’d say I’m torn between the “Winehouse 1983-2011” tribute design, and the “Ladies of Classic Country” design.” I’m a massive fan of Amy Winehouse.

I went to Nashville recently and I was looking for a cool, graphic Loretta Lynn shirt or Dolly Parton shirt and couldn’t really find one that suited me, so I decided to illustrate my own. That’s “Ladies of Classic Country.” Both tees are loving tributes to strong women artists.

Tell me a little bit about what you do with SparkLife.

SparkLife is a blog I’ve been contributing to on a regular basis for about three years now. It’s a teen-centered blog owned by Barnes & Noble.  Their tagline used to be “Pop Culture for Nerds.” Sparklife contains a lot of teen/ lifestyle stuff, but is especially geared toward fans of literature and YA lit content. A lot of re-imagining the characters of different books and fandoms in new situations. A lot of Harry Potter, Hunger Games, Jane Austen. I love working with them, because I get to do celebrity portraits and character portraits.

I think my favorite thing I did for SparkLife was an illustrated slideshow of Famous Author Playlists. Judy Bloom’s playlist had a lot of Riot Grrl and 90s Girl Power Anthems on it. Aldous Huxley’s had a lot of Radiohead and Aphex Twin and dystopian electronica. Oscar Wilde’s was mostly The Smiths.

How long have you lived in Chicago? Do you have a community of artists here?

I first moved to Chicago in 2008, so I’ve been here a while. Last year, I joined a local art collective called Autotelic Studios that has been a really nice creative support network! It’s a group of about 40 artists in Chicago and we have multiple studios in the Logan Square neighborhood.

In addition to sharing workspace, we also exhibit as a collective at local fairs and festivals. We have a new gallery space located on Armitage and Drake called In House that we’re hosting a lot of shows and events out of. There are a lot of new galleries and independent businesses popping up on that stretch of Armitage and we’re excited about the new location.

Anything you’re currently excited about?

Yes! I have a show coming up very soon at In House that I’m organizing with my friend, Ryan Lynch of Outrider Press. It’s a weekend pop-up show August 20 and 21st called Flair Supply. We have a dozen vendors, mostly selling pins, patches, and prints. I’ll be showing samples of all my Threadless shop tees and sweatshirts and I’ll have all kinds of other merch. We’ll being throwing a backyard barbecue behind the gallery and it’ll be a great chance for people to get together and check out the new space.

We’re also having a closing party/reception for the “Sodashoppe Punk” show at Chicago’s Village Tap on Friday, August 26, from 6-9 PM, but the show is up at Village Tap until August 30th.