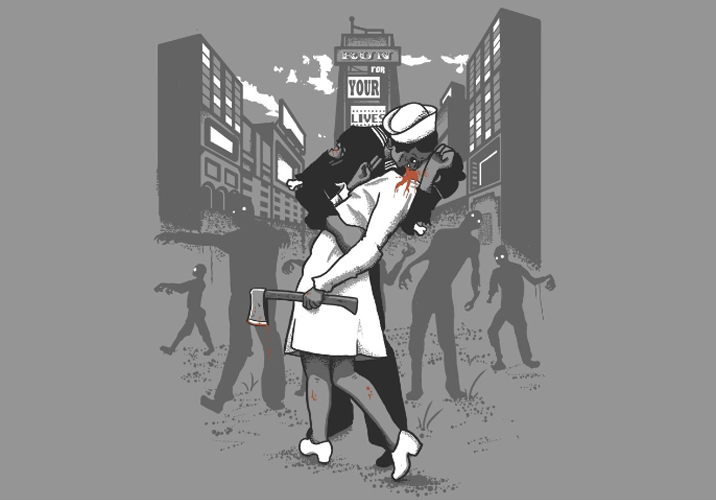 Quick head’s up: here be spoilers about a certain character, a certain bad thing that may or may not have happened to him a few weeks ago, and our complaints about it.

Also note that I said a few weeks ago – if you’re not caught up and you read on, you made a mistake!

What do we want? Glenn!

When do we want him? Now!

Two weeks since the Glennpocalypse, and still no answers. This is the biggest is-he-or-isn’t-he-dead since a certain Game of Thrones character bit it (maybe…also no pun intended) last season.

Needless to say, our heads are exploding like a Walker’s would when bashed in the skull with a baseball bat. And Twitter is our therapy.

If you’re experiencing trauma symptoms from the utter lack of answers about Glenn’s fate, you’re not alone. Live tweet with us every week during The Walking Dead by using #ThreadTWD. Like so:

they should make every zombie kind of look like Glenn #threadtwd #thewalkingdead — Lance Curran (@wearecareful) November 9, 2015

Glenn is not dead until I see his dead face. Whoever wrote his name up there better be ready to look foolish. #Threadtwd — Alex (@alleycat2007) November 9, 2015

I get the feeling that Maggie is going to deal with a lot of Mourning sickness. #threadTWD #puns — Hawke (@batmanjohnson) November 9, 2015

Ok, enough about totally-still-alive Glenn. We may not have had answers, but at least we had more than a dude and his goat. This week? There was drama with more angst than if Shonda Rhimes made a Lifetime movie:

Wait so if this is a Greys Anatomy/ Walking dead crossover do we get … McZombie? @PatrickDempsey @threadless #threadtwd — Hurricane Jen-kins (@Gen_eral_Jen) November 9, 2015

So many speeches, I had to be sure I wasn’t watching a presidential debate. #threadtwd #tabitha2016 — Hurricane Jen-kins (@Gen_eral_Jen) November 9, 2015

A lot of freakin’ speeches…

And some really, really questionable makeout choices, turning this into a straight up Rom Zom program…oh hey, rebound Rick.

“Hey, I know I killed your husband and all but you wanna make out?” -Rick Grimes, stud #threadTWD#TheWalkingDead@threadless — The Joe Show (@joeshowhd) November 9, 2015

Take me with you, after all I killed your husband. #ThreadTWD #TWD — Jack E. (@TweetsFromJack) November 9, 2015

dude…she doesnt even know her husband is dead yet. can’t hit on her yet!!! town of adulterers!! #threadTWD #TheWalkingDead @threadless — keith groshans (@keithgdesign) November 9, 2015

this is what life looks like… so let’s get it on #threadtwd#TheWalkingDead — Lance Curran (@wearecareful) November 9, 2015

There were also some hilarious tweets that don’t really fit into a category, so chew on these random-yet-awesome morsels…a few of which are head-scratchers.

I don’t know that I’d be comfortable with an in town graveyard given the state of the world. #threadTWD — Hawke (@batmanjohnson) November 9, 2015

Do zombies ever bite each other? They have no sense of personal space so I have to wonder. #Threadtwd #TheWalkingDead — Alex (@alleycat2007) November 9, 2015

@threadless I think Patrick from Spongebob has a pretty legit idea for Alexandria https://t.co/vnUaKR3VrU#ThreadTWD — The Joe Show (@joeshowhd) November 9, 2015

And finally, our winners for the night, proving that something awesome can come out of a no good very bad possibly dead character fate. Because just like Zombieland taught us: you gotta enjoy the little things.

And our zombie tee selfie winner…whose selfie had nothing to do with zombies, but see what you’re missin’, selfie slackers? Get on that!

@threadless I don’t have a zombie shirt I just really like my hoodie #ThreadTWD pic.twitter.com/A1Sa4rgRuf — Hawke (@batmanjohnson) November 9, 2015