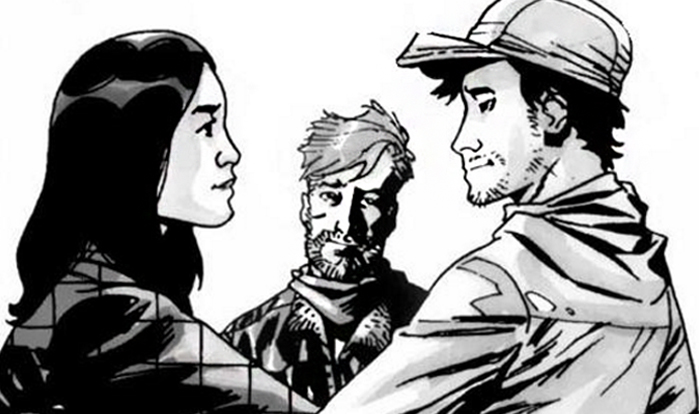 Glenn’s BACK, baby! Because, duh.

If there was an opposite way to sing “ding dong the witch is dead” that was less lame than “ding dong the Glenn’s NOT dead”, we’d be singing it right now.

And to think that his triumphant return happened right before the Game of Thrones Season 6 poster sporting a certain “dead” character came out…coincidence?

…probably, but either way, Glenn’s return has got us like:

If you wish you could have celebrated this moment with us, we’re not even halfway through the season yet – there’s still time! Just live-tweet the show with #ThreadTWD.

Although the Twitter reactions to Glenn’s return were slightly less full of “a;lsdkjg;sdjgk!!” keyboard-vomit excitement as we expected…probably because none of us had lost hope.

Hey look it’s that one guy. And it was a fakeout, like we all thought. Real original #TWD #ThreadTWD

@threadless I HAVEN’T BEEN THIS HAPPY SINCE THE LAST THREADLESS SALE!!! #Glenn #ThreadTwd

Then on the opposite side of things, the children were once again allowed to roam the zombie-filled wasteland of a world. If not just to keep that whole “Carl, stay in the house” meme in business.

So Judith is starting to look like Lori-the REAL question is: Will she look like Shane, or Rick? #TheWalkingDead#ThreadTWD@WalkingDead_AMC — Blú (@Hersheyhunt) November 23, 2015

Carl should leave the gun lessons to Rick. #threadTWD

But not only were the teens roaming free – their angst was too. Which totally inspired our flash challenge, and for that? We thank you, teenaged hormones. We thank you.

@threadless “it’s like I get I’m surrounded by the dead, but do any of us really feel alive?” #threadTWD — Hawke (@batmanjohnson) November 23, 2015

@threadless “Ran away today but still got found, even in an apocalyptic society a girl just can’t get any time to herself GOSH ?” #threadtwd — ♫ MEL IN THE A.M. ♛ (@joejonasfan_xo) November 23, 2015

(Enid) everyone around here is just sooooo emo and dead inside #threadTWD — keith groshans (@keithgdesign) November 23, 2015

Glenn wasn’t the only character we saw come back this episode. We also had…balloons. Again. Filled with helium that seems to be in inexplicably large supply post-apocalypse. Someone needs to use that to make the zombies high-pitched…priorities, people.

And your guys’ genre-meshing references were totally on-point again, and we’re all officially friends because of it.

Enid could easily be batman with the way she makes silent exits. #threadTWD — Hawke (@batmanjohnson) November 23, 2015

Enid is the April Ludgate of this show. #ThreadTWD — Lindsey Pyne (@pynestuff) November 23, 2015

Enid is an orphan? This is lending credence to my Enid is Batman theory. #threadTWD — Hawke (@batmanjohnson) November 23, 2015

Spencer-man Spencer-man does what ever a screw up can. Can he swing from a web, no he’s a screw up. #threadTWD — Hawke (@batmanjohnson) November 23, 2015

Finally, as always, we have our glorious winners! Please take note of our fantastic angsty tweet flash challenge winner…

@threadless “AND WHY DID MY PARENTS NAME ME ENID.” #threadtwd

@threadless Vincent insisted that he wear a suit. #threadTwd pic.twitter.com/nO1hW7NluG