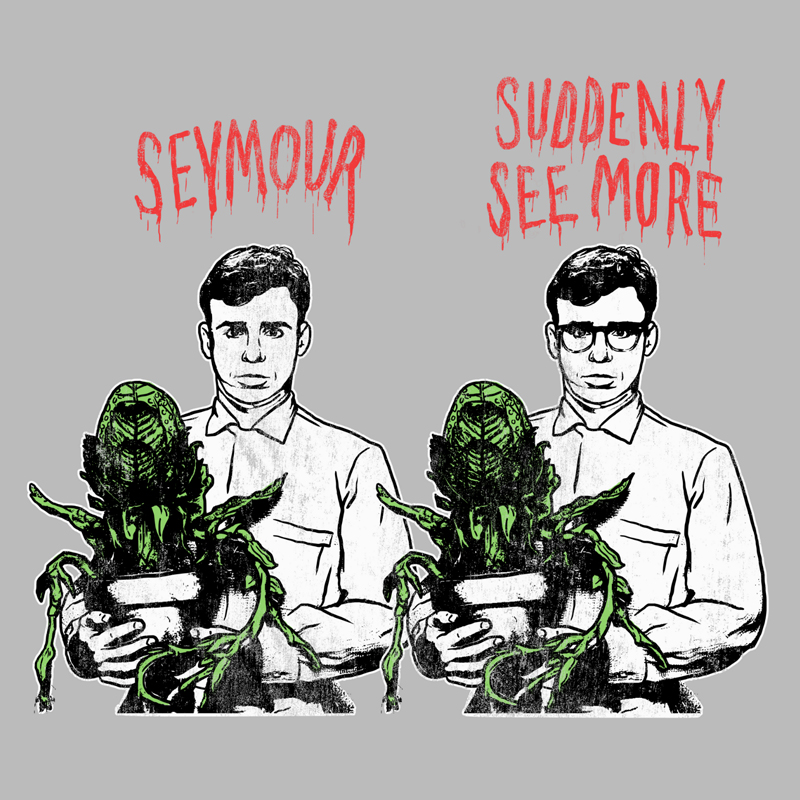 The ’80s were a rad time, man. Big hair, neon spandex, Rick Moranis, ahh yes. Many of the movies from this decade defined what it meant to be a “cult classic” film. And it doesn’t get much more cult classic-y than the musical-turned-movie about a giant killer alien plant, Little Shop of Horrors.

When we saw Katie Campbell’s Little Shop-inspired design for our Urban Art challenge, we knew it was gonna be “bigger than hula hoops.” Her play on the lyrics for “Suddenly Seymour” makes this design equal parts Banksy and Hanksy, and looks like it would fit right in spray-painted on the side of Mushnik’s Florist.

We talked to Katie Campbell (a.k.a CampKatie) about her love of Little Shop of Horrors, her time working at DC Comics and Warner Brothers, and her amazing designs. Check out what she had to say!

Congratulations on your Urban Art win! What have you been up to lately?

Thanks so much! This might be one of my favorite wins at Threadless. I have been moving around a lot in the past year. I moved out to Los Angeles, from Savannah, GA, last September and had an amazing job at Warner Bros. as
Senior Graphic Designer for DC Comics/WB Consumer Products. Unfortunately life changes made me pick up and move back to Tallahassee, FL
(where I am originally from) about 3 weeks ago…just in time for Hurricane Season. So as of right now, I am back at freelancing full-time.

Has the change in scenery/vibe influenced your art at all?

The change from small town south to big city California vibes was a HUGE change all around. I noticed I hustled a little more to make ends meet, but as far as design influence, I wouldn’t say that was affected as much. My job at Warner Bros allowed me to work with an amazing team of artists. The exposure to the talent, along with the knowledge of how to design products that sell for big films and properties was priceless! It was a new way of thinking when designing. I had to consider trends for the season as well as design products over a year in advance.

Little Shop of Horrors is one of my all-time favorite things. Are you a fan as well? If so, favorite song and favorite Audrey II size, GO.

I am a HUGE fan of Little Shop of Horrors! It’s the first musical I was obsessed with as a child. Obviously my favorite song is “Suddenly Seymour.” I wanted so desperately to sing like Ellen Greene. Ha, I don’t think I could handle Audrey II any larger than a small potted plant that only needed a drop of blood from the finger.

Have you ever seen the musical?

I have not seen the live musical, but would give my small toe to see Ellen Greene perform her role as Audrey on broadway.

Your design is seriously amazing. How did you come up with it?

So my friend at work went to Karaoke all the time and we both talked about how much we loved Little Shop of Horrors. I wanted to sing a duet of “Suddenly Seymour,” so in order to prepare I would listen to it full blast while in my car (which was a lot in LA traffic). When I saw that there was an Urban Art contest for Threadless, I knew I wanted to approach it in a more humorous way because that’s what stands out to me when I see clever street art. I had the style of Hansky in mind as well. So while driving and trying to hit the impossibly high notes of Ellen Greene, the play on words struck me and I knew it was a brilliant idea :)

…I never did get a chance to sing that duet, but perhaps now I have a reason to celebrate and debut my vocal skills.

What was the process for creating this piece?

The process was pretty simple once I had the strong concept. I referenced the work of Hanksy and Banksy for style. I drew over a photo of Rick Moranis with Audrey II. Tried to keep it simple and high contrast, added distressing and hand drew the lettering.

Do you have any other ’80s cult classic favorites?

My favorite movies are all from the ‘80s and ‘90s. A few ‘80s cult classics off the
top of my head would be Lost Boys, Revenge of the Nerds, Teen Wolf, Goonies, Adventures in Babysitting and Beetlejuice (beetlejuice, beetlejuice).

You have a few different styles going on in your designs, including a lot of rad hand lettering, which is really cool! What inspires you?

Thanks! Because I have done a lot of work for the music and entertainment industry I am constantly inspired by films, album art, merchandise, screen printed gig and movie posters, especially Mondo and sites like dribbble.com

I just want to thank Threadless for keeping me inspired in between work and giving me the confidence to share my ideas, no matter how silly they may seem. I am beyond thrilled and honored to know that my art will be on the walls at Threadless HQ! Hopefully bringing smiles to people that pass it.