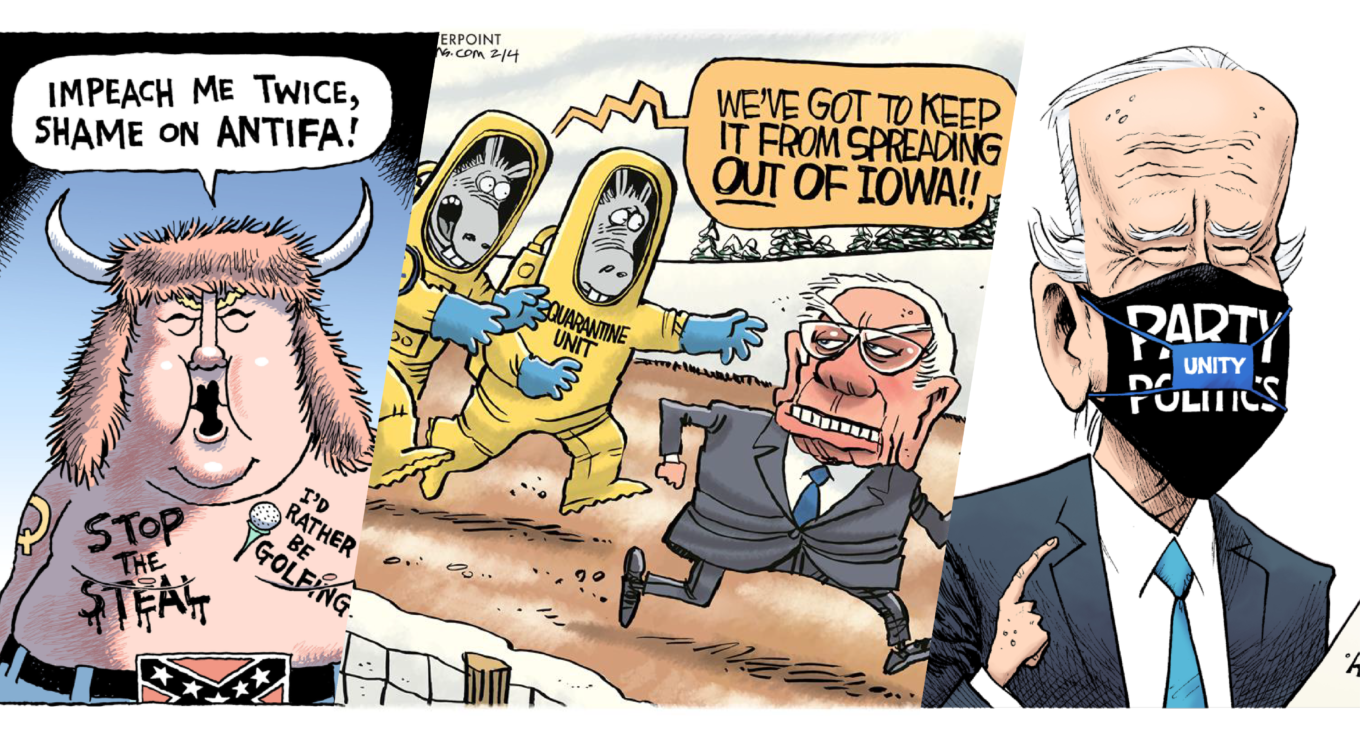 We live in an era when political satire has become the norm—whether it involves Donald Trump, Joe Biden, or Andrew Cuomo. But ironically, editorial cartoons are faltering in newspapers. So where do we go for biting political humor? Counterpoint is at the forefront of the newsletter comeback, sending out political cartoons three times a week to subscribers’ inboxes. Each newsletter features a cartoon from a left-leaning and right-leaning cartoonist, allowing both sides of the aisle to present their perspective on current events. The newsletter’s philosophy is to break past online algorithms that decide what headlines we see and foster a place for political debate—driven by humor.

Counterpoint was co-founded by Pulitzer Prize–winning cartoonist Nick Anderson, who has been cartooning for more than 30 years. When he began, there were about 180 full-time editorial cartoonists employed across the United States. Now, there are roughly 25. Yet, they’re in higher demand more than ever. To get a sense of just how hungry the public is for political cartoons, Anderson explains:

“One cartoon I drew during the [2016 United States presidential election] was posted by a handful of political advocacy pages. It received well over 500,000 shares, and those were just the ones I was able to track. Imagine how many people saw that cartoon? If 50–100 people saw each person’s Facebook share (a conservative estimate), that’s 25–50 million views of that single cartoon.”

Aside from their newsletter, another place you can find Counterpoint’s popular cartoons is in their recently launched Threadless Artist Shop. It features a wide range of apparel and other products showcasing drawings by notable cartoonists including Lisa Benson, Ted Rall, and Rick McKee. Each cartoonist offers their hilarious takes on everything from the pandemic to Trump leaving office. To offer insight on how Counterpoint came together, Anderson spoke to us from his home in Houston about cartooning for newspapers, content piracy, and fusing the left and right.

How did this cartooning newsletter begin?

Nick Anderson: It’s been around for two years now. Counterpoint started from scratch. We talked about it for eight months beforehand. We started in March, when the Muller Report came out, by putting our cartoons on social media. Then a few weeks later, we got the newsletter going. There were a few hundred subscribers, then it started to grow. The point of the newsletter was to test the interest. It was ambitious. Now, we have over 100,000 subscribers.

You chose the intersection between politics and humor. Why do people love it?

People love the package. The newspaper format is failing when it comes to cartooning. We got 25 full-time cartoonists in the country—zero in Texas, the second-largest state (after California). So, if cartooning is going to survive at all, it has to change. Counterpoint is a way to group together our fate from the newspaper business. They are cutting us as if we were not part of their core business. When I started talking to the funder of Counterpoint, he was really passionate about it being a mix of political philosophies. He feels we’re too siloed in our media landscape, not left or right. I’m a believer that there aren’t just two sides. I was skeptical at first, but it works as a newsletter.

Why have political cartoons been so important in America, in the past?

We discussed early on, do we push our leftist cartoonists to make left-wing cartoons? And same with the right? But if you push a political position onto an artist, it’s just not going to be as good. I did a cartoon criticizing Cuomo yesterday. What we need in our country is to get out of our silos and be willing to criticize our own sides. For the most part, our cartoonists have been very good.

I hope they’re not dead. I hope we can grow. Our challenge is proving the business model. We have revenue coming in and we are hopeful our partnerships will help us grow in the future. Our Threadless Artist Shop will feature even more cartoonists going forward.

How has cartooning changed since you became a cartoonist?

Almost none of our cartoonists are employed by newspapers (only one is). I used to work for newspapers. When the newspaper business started to decline, cartoonists went down with it. I originally got into reading cartoons in the late 1970s. I was the youngest of 11 kids in a mixed family—I lost my birth mother when I was young and my dad remarried, and I was still the youngest of all (including the step kids). My mom was an artist and my dad was a scientist, so I have a mix of both analytical and creative in me. I drew a lot and bought a book on cartooning, and got obsessed with cartoons. It led me to editorial cartoons. I was completely taken that an artist could communicate an opinion in one panel. From high school, I was hooked. Been doing it ever since. I’m 52 now.

How has the visibility of political cartoons changed over the years?

Back in the 1970s, cartoonists were the rock stars of the newspaper world. People knew them as household names. In the 1980s, that continued a bit. By the 2000s, it was completely different. Now, our work is all over social media. Editorial cartoons are seen more now than ever. I see my work online unattributed all the time. It’s a blessing and a curse—our reach is a blessing and a curse. Barbara Streisand posted my cartoon on Twitter but gave me no credit. People don’t think they’re doing anything wrong, and if you protest, people get mad at you, saying “I’m helping get your work seen.”

How do you fund your work?

I generate more income from Patreon than anything else. It’s part of how I make a living as a cartoonist. It helps.

What was the Trump era like for you as a cartoonist?

Well, Texas is a conservative state, and there I was trashing the president every day. People were calling for my job every day. I drew a cartoon after his convention speech in 2016, showing a picture of Trump from behind and the teleprompter showed Hitler’s salute. Somehow that got published. My cartoons got a lot of blowback, so I was on a short leash after that. I got hate mail before and after, but I didn’t care because I was doing my job.

Who is the easiest to draw? What’s it like sitting down and drawing these politicians?

Donald Trump was the best. He was a gift to cartoonists—the gift that keeps on giving because he won’t go away. I do my best work when I’m angry. I was angry for four years and appalled with what was becoming acceptable—I still am. During the 2020 election, I was drawing daily, cranking out cartoons. One week I drew 15 cartoons. When things go well, my work gets a little flatter.

What will happen next in American politics?

Trump will continue talking about running because it gets him power and attention. I’ll be surprised if he actually runs. He doesn’t like to lose and I think there’s a good chance he’d lose again. But he’ll keep on teasing to get the attention. He likes it when people kiss his ass.

Does Joe Biden pale in comparison as a cartooning subject?

Yes, for me. But other cartoonists on the conservative side might feel differently. On Counterpoint, we feature so many different cartoonists, including some far-left cartoonists who draw Biden as the enemy (Bernie Sanders fans). Whoever the cartoonists are, I just want them to do their best work and be true to themselves.

Who are your cartoonists? How do you choose the artists?

I knew all the cartoonists, so it wasn’t tough to choose them. We tend to skew a little older. Younger people have a different take on things. We’re doing traditional, one-panel cartoons. Some of the younger cartoonists out there use multi-panel cartoons, but those cartoonists don’t work for Counterpoint. Younger cartoonists can be found on The Nib. When creating Counterpoint I thought, why try to copy what they’re doing? We decided to feature some of the older cartoonists. The youngest cartoonist in our newsletter is in his mid-40s. When I look at younger people’s work, those who are not well-known, it’s hard to do right. I hope young people will be inspired to get into editorial cartooning.

Visit Counterpoint to receive newsletters with political cartoons poking fun at the latest events. You can also find Nick Anderson on Patreon and Instagram.