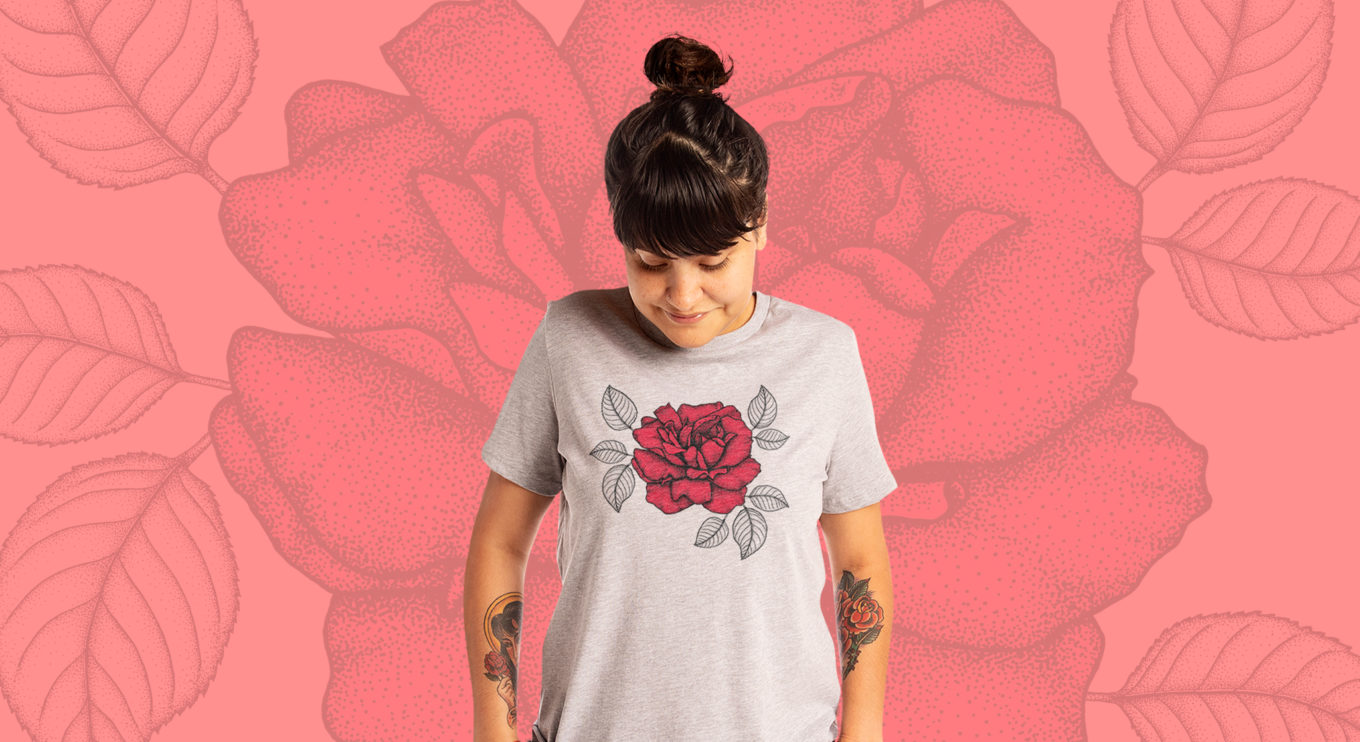 March is Women’s History Month, meaning that it’s time to stop, look around, and take the time to honor the women who have sacrificed for women’s rights. It also time to take stock of where we are now and how far we need to go for future generations.

As G.D. Anderson once said, “Feminism isn’t about making women strong. Women are already strong. It’s about changing the way the world perceives that strength.”

Or even still, as Stephanie Bennett-Henry said, as well, “Life is tough, my darling, but so are you.”

From the suffragists fighting for women’s right to vote in 1920 to the women who fought for their own liberation during the 1960s movement and beyond, there is a long history of women overcoming obstacles to achieve great things. Recognizing women’s history became a weeklong national tradition in the early 1980s, and eventually grew into Women’s History Month. This month also includes International Women’s Day (March 8), which is a public holiday in many countries across the world.

Whether you’re watching your favorite feminist documentaries this month, cranking the best empowerment tunes on repeat, or donating to your favorite charity that supports women, don’t forget to get some tees, merch, and artwork by women, too. Below are 12 artists on Threadless, who make art with meaning. One can’t help but think of the enlightening Maya Angelou quote: “I am grateful to be a woman. I must have done something great in another life.”

Brazilian–based artist Siyi has a knack for the cute and the weird. Siyi focuses on internet culture-themed t-shirts, hoodies, leggings, mugs, and more, all under the brand Hey Siyi, which is both adorable and fierce. Armed with a heavy dose of sarcasm, designs range from minimal patterns to one-liner jokes, all available to wear on tees. Some of the best t-shirts by Siyi include those that say “Whatever” or “Mostly Harmless,” and even one that says “Meh”—though one of the cutest t-shirts shows an alien with the phrase: “Earth, no thanks.”

Atlanta–based tattoo artist and illustrator Dani Lopez is known for her stunning work at Apocalypse Tattoo Co., but beyond that, she illustrates for her Artist Shop called Dani Lopez Studio, and puts a focus on sustainability. “I am passionate about living a clean and sustainable life by being a good steward of my personal recourses and of the earth as much as possible,” said Lopez. “I hope to see a future where all life is appreciated.”

Lopez creates unique face masks as part of her shop, featuring designs that range from Japanese-influenced tattoos to exotic tropical flowers, and even a cat face mask with whiskers.

“With every passing day, my mission becomes increasingly vital as climate change and unsustainable practices wreak havoc on people and the planet,” said Lopez. “When you view my work, may it be a reminder that we can take control of how we view the world around us, and ultimately how we treat the world around us.”

This artist, based in Perú, is a freelance illustrator who only recently ventured into the world of apparel. The Nowhere Ross Artist Shop looks at the influence of cartoonish tattoo designs and how it works best on t-shirts, bags, and backpacks. “I love to integrate tattoos, alternative fashion, subcultures and emotions in my illustrations,” said Ross. One of her most recent drawings is a beautiful piece of a woman in a heart-shaped bathtub. “A little devil taking a bath in her little house in hell,” as she describes it. It’s to celebrate self-love year-round.

Annesha Gordon is a New York–based artist, designer, and owner of the O Share Designs Artist Shop on Threadless. Featuring colorful characters and bold illustrations, her designs are “for awesome people who aren’t afraid to stand out,” as she puts it. The title of the shop “Oshare” derives from the Japanese word meaning “stylish,” and each piece is for the anime nerd, or those who are in love with Japanese art, design, and street style.

“I want my work to let you know that even though we are deeply influenced by our upbringing, our environment and are constantly being fashioned, or molded, by the world, it is possible to live and be happy,” said Gordon. That’s what keeps her going.

Valeria Correa is an artist based in Caracas, Venezuela who has a clever approach to her artwork. She creates digital collages that bring together historical art paintings, mixed with current-day culture. Expect to see an 18th century princess getting a tattoo, or a prince at a New York laundromat, or the Venus of Botticelli wearing a face masks. You get the idea. All these works are on view at The Galeria Store, a sort of catchy version of an art gallery turned merch shop, which she calls “a totally pandemic style,” as most world-renowned museums are still closed.

Correra comes from an art historian background and has a degree in museology. She wants to make art more accessible. She knows, in her own words, “how to take a classic character from a Goya or a Van Gogh painting and put them in an embarrassing, comic or simply boring situation in today’s world.”

One of her favorites, she says, is “Da Vinci’s ‘La Gioconda’ doing the world’s favorite activity of this quarantine era—baking bread and cinnamon rolls. And with this one, surely more than one feels identified.”

Dawnela is a California–born artist and designer. Her Artist Shop, The Dailey Dawnity, features brilliant and unique designs ranging from waffle cone leggings to backpacks and dessert-themed travel mugs. Other designs include a squid on t-shirts and an octopus on jersey shirts.

Influenced by classical artists like Da Vinci, graphic designers, and digital media, the Louisiana–based artist also names cosplay, video games, and fashion as her influences for creativity. She calls herself “pretty much an embodiment of nerd-dom and geekdom.”

Teanna Woods Okojie is a photographer, filmmaker, and producer who shows off her stunning work in her T. Woods Artist Shop on Threadless. The San Diego–born artist creates photo projects focused on positive depictions of minorities and marginalized populations, cultural diversity, and cultural preservation.

With a focus on social change and women’s empowerment, she photographs iconic shots of women posing at the beach or in Queens, New York, and landscape shots including old buildings, which bring a quiet sense of calm to her female gaze.

As she said in a recent interview: “Integrity and ethics are the fundamentals of all the work that I do. I can say I am most proud of the ethical storytelling I’ve created. Ensuring that I’m telling an accurate story of the individual at hand. Whether it’s a family portrait session or I’m working for a nonprofit organization, it’s key that I’m capturing the essence of who my client is. I can say that is consistently conveyed through the images created. Integrity and ethics are what my company stands for throughout the years.”

She adds that women photographers need to be treated with respect, especially in a work environment. As she explained, “As I continue to go forward in my photography career, another ongoing struggle is being paid for your work and having your worth honored. Being a full-time artist and wanting to earn money for the art that you’re creating is a significant obstacle. I am so grateful to have very supportive mentors, artist community, and family while navigating through this complicated industry.”

For her Kaster Artist Shop, Natalia Castro designs and creates retro-inspired, scientific-esque illustrations. Her original illustration work is made with ink, mostly in black and white, but also color, too.

Kaster uses a stippling (dot) technique to build volume and depict shading in her realistic artworks, which feature animals ranging from rats to hummingbirds, and stoic portraits of century-old trees, calling to minds the stylized modern artwork of Albrecht Durer, or even historic, 19th century botanical drawings.

It makes one sit and think about our immediate surroundings. As the famous Native American proverb goes, “We don’t inherit the earth from our ancestors, we borrow it from our children.”

Los Angeles artist Stephanie Inagaki creates adorable dog masks to make them look like bats, for the canine fan. In her Artist Shop, her fine art and design work showcases her knack for creating dark figures with a light touch. From a t-shirt covered in cartoon bats to a pillow covered in cartoon kittens, her designs incorporate everything from crows and foxes, to cats, snakes, and skulls.

Stephanie is a master at witchy symbolism that is both graphic and ancient. This is truly for those inspired by Tim Burton and Jhonen Vasquez, but graced with a feminine touch. She says her artwork is inspired by the mythology and folklore of her Japanese heritage (she often includes a woman wearing a Kimono in her pieces).

“I have created my own visual narrative to symbolize these creatures as familiars,” she said. “Familiars protect us, they are a part of who we essentially are, give us strength, and can help lead us to our ways. Sometimes they can be mischievous too. And throughout history, the creatures that I have portrayed have all had mystical qualities from shapeshifting, guiding the gods, to being gods themselves.”

Inagaki also explains that the natural environment is a constant inspiration for her works. “Nature is an incredibly powerful, protective, and healing force,” she said. “The snakes here are part of the figure as either the actual obijime sash that ties the obi tightly together or as the hair, hearkening to Medusa.”

Me and the Moon

In the very cool Me And The Moon Artist Shop, we get to see the artwork, graphic design and illustrative talents of the Dutch artist Evelyne van den Broek. She creates simple but iconic artworks, including merch that is themed around the phrase “You are magic,” as well as comical “Coffee and Anxiety” face masks.

As a fan of the traditional art of hand lettering, her typographic work has appeared in Glamour magazine. In one project, she took quotes from the hit Netflix comedy Unbreakable Kimmy Schmidt and made them into visual masterpieces.

In this nature-filled, wondrous shop, the artist Cassandra Canady sums up her approach to artwork quite simply: “Nature is beautiful, life is strange.” As a freelance artist and children’s illustrator, she loves designing t-shirts.

“I work mostly on fantasy, children’s illustrations, and semi realistic art,” said Canady. “Designing for shirts, and such, is a new interest.” Her strength lies within creating creatures, like a Rainbow Vulture, fantasy figures, and natural landscapes that look like they come from an Old Masters painting.

Naomi Ruth is an English artist based in Osaka, Japan. In her super-creative Artist Shop Astro Sludge (great title, right?), she makes drawings inspired by the occult, kitschy science-fiction films, and classic tattoo designs. “My work is a melting pot of everything I find visually interesting, with influences ranging from vintage horror to traditional tattoo flash to retro Japanese toys,” said Ruth. She describes her style as “aesthetically bright and thematically dark, with colors inspired by 1960s prints.” 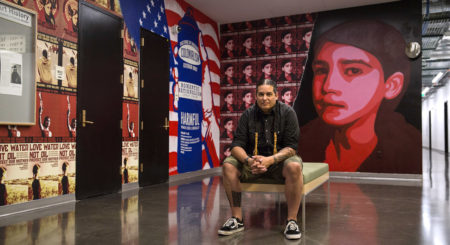 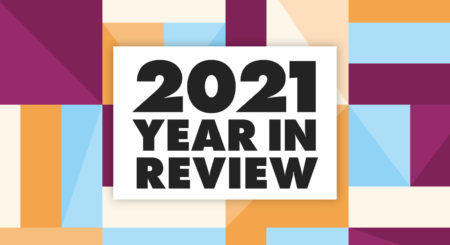 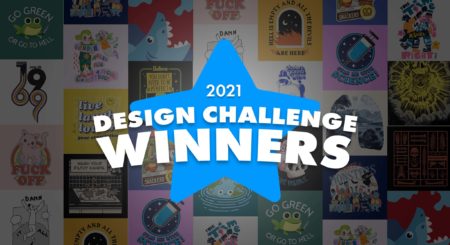