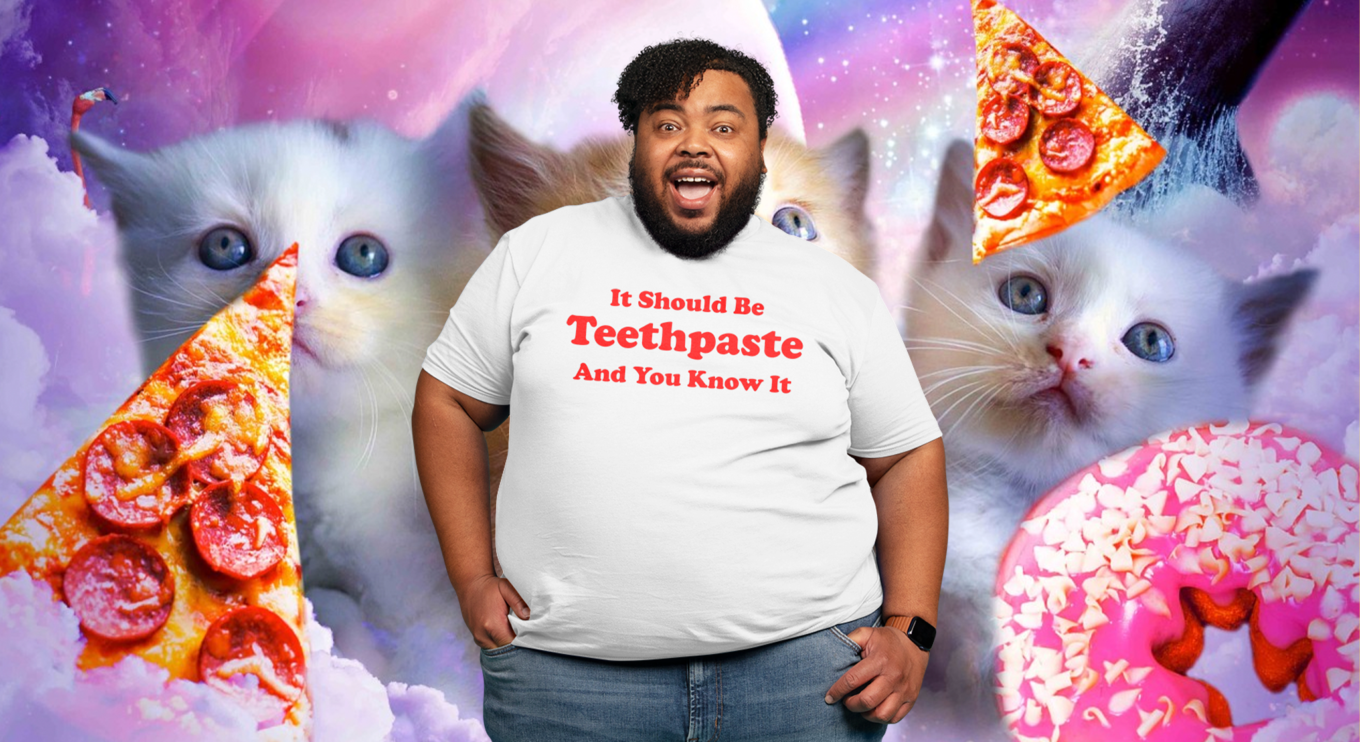 We’ve come a long way since the first memes began to evolve. What started as comics, chain emails, and cat pics has evolved into a rich ecosystem of memes. The internet provides a fertile ground for memes of all varieties. Now, we enjoy a diverse, modern meme population with memes of every shape, size, and aesthetic.

Today we are exploring our own meme genealogy. Our memealogy, if you will. Join us on this safari as we traverse the magical worlds of our most meme-worthy creators.

Yipptee is the doggo of modern memes; one species, endless diversity. How are chihuahuas and the St. Bernard cousins? How did the same creator that brought us the adorbs “Saxalotl” also curse us with “It Should Be Teethpaste And You Know It”? Science may never understand. Current, trendy, versatile, Yipptee is the smartest, most polite kid you’ll ever meet in detention. Yipptee’s natural habitat: on the cutting edge. Pairs well with being the funniest one in the group chat.

Looking for something with frosted tips, a foul mouth, and all the graphic design power of the early 2000’s? Welcome to Teenage Stepdad. At first glance, some of these bad boys look like a good ol’ fashioned dad shirt. But wait…does that say “Diarheha?” Deserving of a double take, these memes are naturally occurring in dive bars with sticky tables, behind the janky rollercoaster at local carnivals, and at the kid’s table at family functions because they simply refuse to have an adult conversation. Teenage Stepdad pairs well with mullets and tailgating a nephew’s little league game.

Sometimes a witch needs to slap on some lip gloss and call her bestie on the landline while doodling in a pink notebook with a glitter gel pen. There’s strawberry scented body mist in the air and a picture of your crush inside a pentagram. Britney Spears is playing. Life is good. These designs are soft, sweet, and veering slightly into a different dimension.

Picture this: you’re walking home. Suddenly, out of the corner of your eye you spot a frog in the grass. It’s glorious, bloated, and, most importantly, portable. Do you walk away? Or do you scoop up that little lump of love, give it a tender kiss on the forehead, and begin a new life together as BFF’s? If you choose love, you’re in the right place. Frog Witch is what happens when a cosmic lizard genie gets trapped inside a Gameboy Color. So much passion, so few pixels.

Punk, dirty, and smelling like they crashed for three weeks on your girlfriend’s uncle’s friend’s couch, these memes are meant to be slapped on stop signs or scratched into filthy bathroom stalls while the band outside racks up their third noise complaint of the week. Frontythreads is all about taking down the man, questioning authority, and, most importantly, just being yourself. Pro tip: not attire for job interviews.

Who has two thumbs and the best eyeliner in the animal kingdom? These memeable little critters enjoy knocking over garbage cans and skateboarding through the parking lot, picking up litter along the way (to recycle, but also to snack on.) Nocturnal Trash Pile is equal parts scrappy and adorable. Rabies shot not included.

It’s not resting b*tch face if you want to look intimidating. bbywacha is sorry not sorry. These are the memes of bubblegum and knuckle tattoos, kitchen knife haircuts at 2:30 a.m., and taking bomb selfies in the gas station bathroom. Now hurry up, we have gender norms to squash.

Thunderpuss makes you wonder if maybe some of the Schoolhouse Rock! kids got lost at Woodstock and never really made it out. Like a rainbow sprinkled donut on the sidewalk, these designs are dirty but delicious. These are your philosophy professor’s favorite memes. Natural habitat: in a record store at noon on a Tuesday, or at a booth at a 24/7 breakfast joint coloring in the kid’s menus while waiting for chocolate chip pancakes at 7:00 p.m.

Instead of going to church on Sundays, these memes spent their youth rooting around their dad’s extensive record collection and, as a result, grew permanent sideburns at just 7 years old. Now they hang out, raising pet rocks, never updating their flip phone, and just generally being the coolest person at the neighborhood BBQ. Natural habitat: shag carpet.

This Is a Flesh Prison

Black coffee, nihilism, and getting free stick and poke tattoos. These designs are for those who have seen every episode of The Twilight Zone and have never once smiled for a selfie.

Legend has it, Tony Hawk once fell asleep in a musty recliner while an ad for Zoobooks played on repeat, and thus Soap Shoes was created. These memes are young, rebellious, and lowkey not sure what they are doing. Natural habitats include skateparks, alleyways, and on the free, somewhat stained couch they adopted from the sidewalk.

Random Galaxy answers the question, “What happens when a Lisa Frank coloring book and a sentient disco ball get together for a road trip on Saturn’s rings?” The answer: things get pretty weird. If you had the strongest magnifying glass in the world and looked really close at a serotonin hormone, this is pretty much exactly what you’d see. In this reality, sloths ride pandas into battle, lasers shoot from cat buttholes, and the waterfall rainbows never end.

We hope you enjoyed this exploration of our most memeable creators. Remember, there’s no one way to meme.

EXPLORE AN ENTIRE GALAXY OF MEMES

Featured designs, “Kitten Cat in the Clouds, Donut And Pizza” by Random Galaxy and “It Should Be Teethpaste and You Know It” by Yipptee.