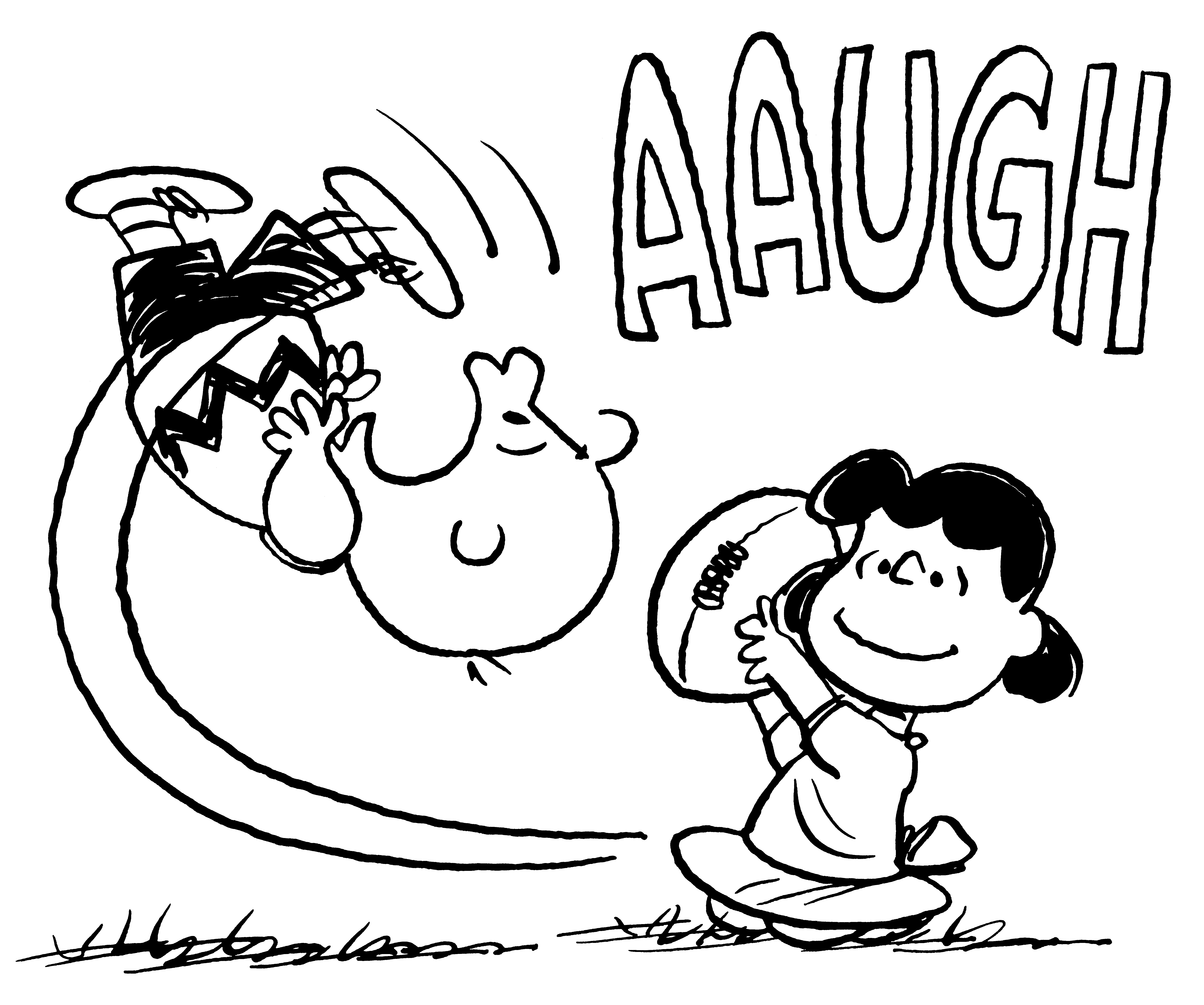 Imagine drawing the same characters every day for 50 years. Every time Charles Schulz sat down at his desk, he had to come up with new adventures for the World War I Flying Ace, news reasons for Charlie Brown to be down in the dumps, new quips for Lucy. And you know what? It never got old.

For our Peanuts design challenge, we’re looking for unique designs that reimagine these classic characters in a fresh way. And who better to give you some inspiration for the task than Schulz himself? We asked Peanuts Creative Director Paige Braddock to give us some insight into how Schulz kept the ideas flowing.

Charles M. Schulz created 17,897 comic strips during his career as a cartoonist, making Peanuts arguably one of the longest running, illustrated stories ever told by one human being. It’s nearly impossible to deconstruct a work such as Peanuts to discern what is at the root of its universal appeal. It could easily be argued that the comic would have achieved widespread popularity solely based on the strength of the characters alone. But when asked about the success of Peanuts, Schulz identified twelve devices that he established early in the strip’s development. He attributed the comic strip’s popularity at least partly to these twelve themes: 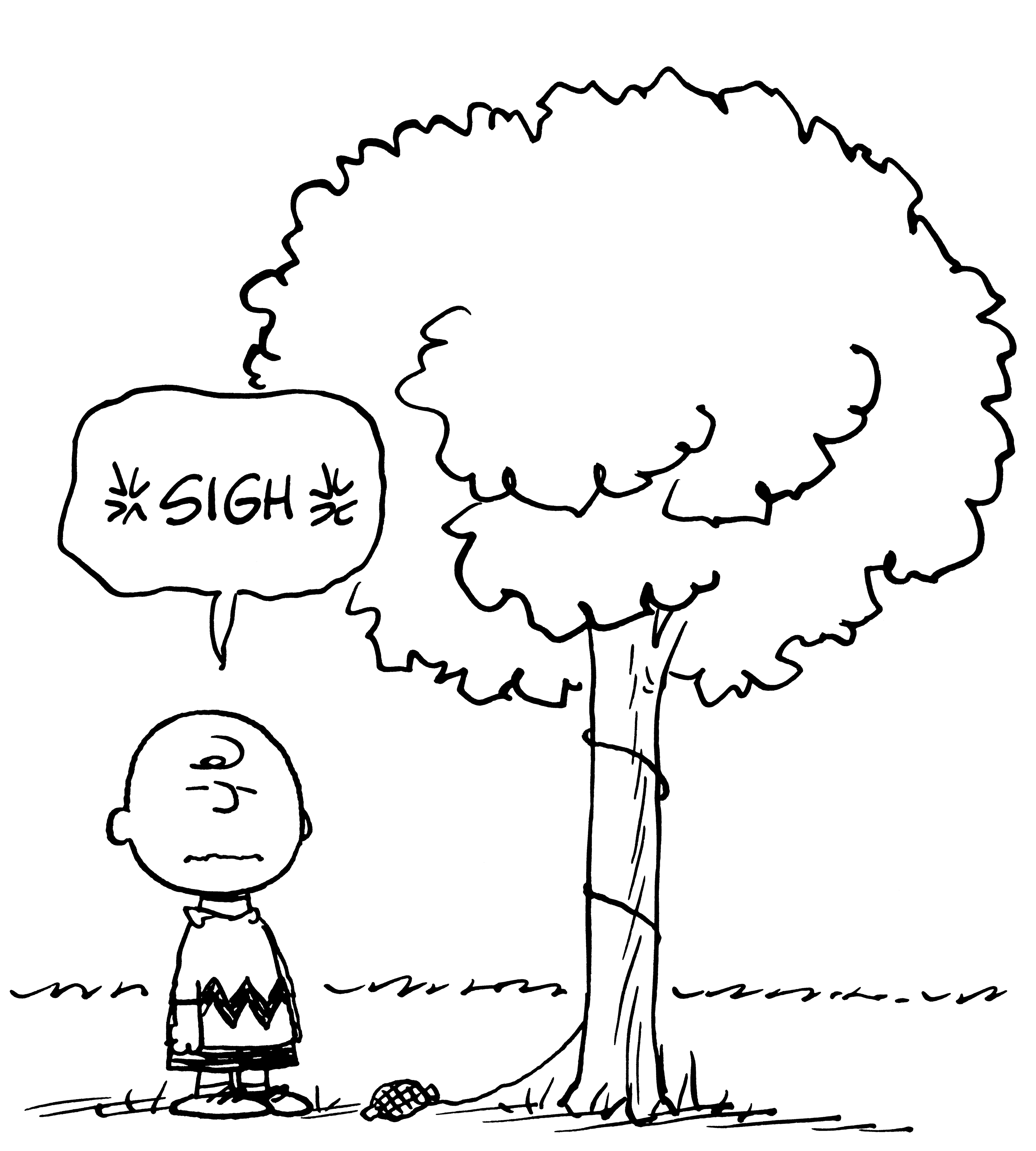 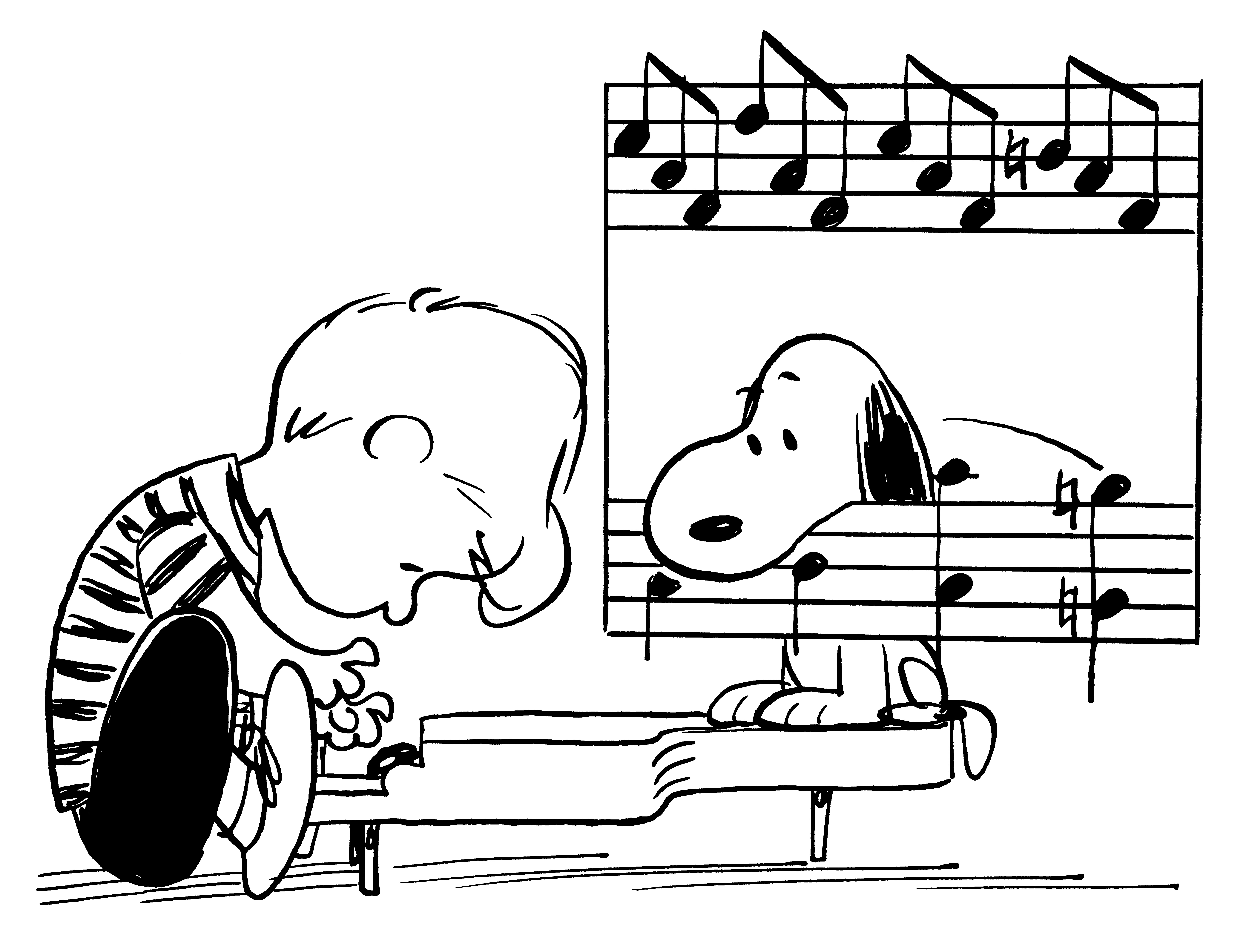 Schroeder began playing Beethoven on his piano even before he could talk in the comic strip. He is the symbol of the artist, striving for perfection, incessantly interrupted by Lucy. She is continuously competing with his music for attention. For strips featuring Schroeder’s music, Schulz meticulously duplicated classical scores from actual sheet music. Schroeder’s illustrated scores have been used as numerous visual gags. Other characters bump into them, birds sit on them, and even Charlie Brown’s kite gets tangled up in them. Schulz was famous for saying that he thought words that start with “B” sound funnier, like beagle, for example. And while Brahms, Schulz’s favorite classical musician also begins with the letter “B,” in the end, Beethoven rhythmically worked best. 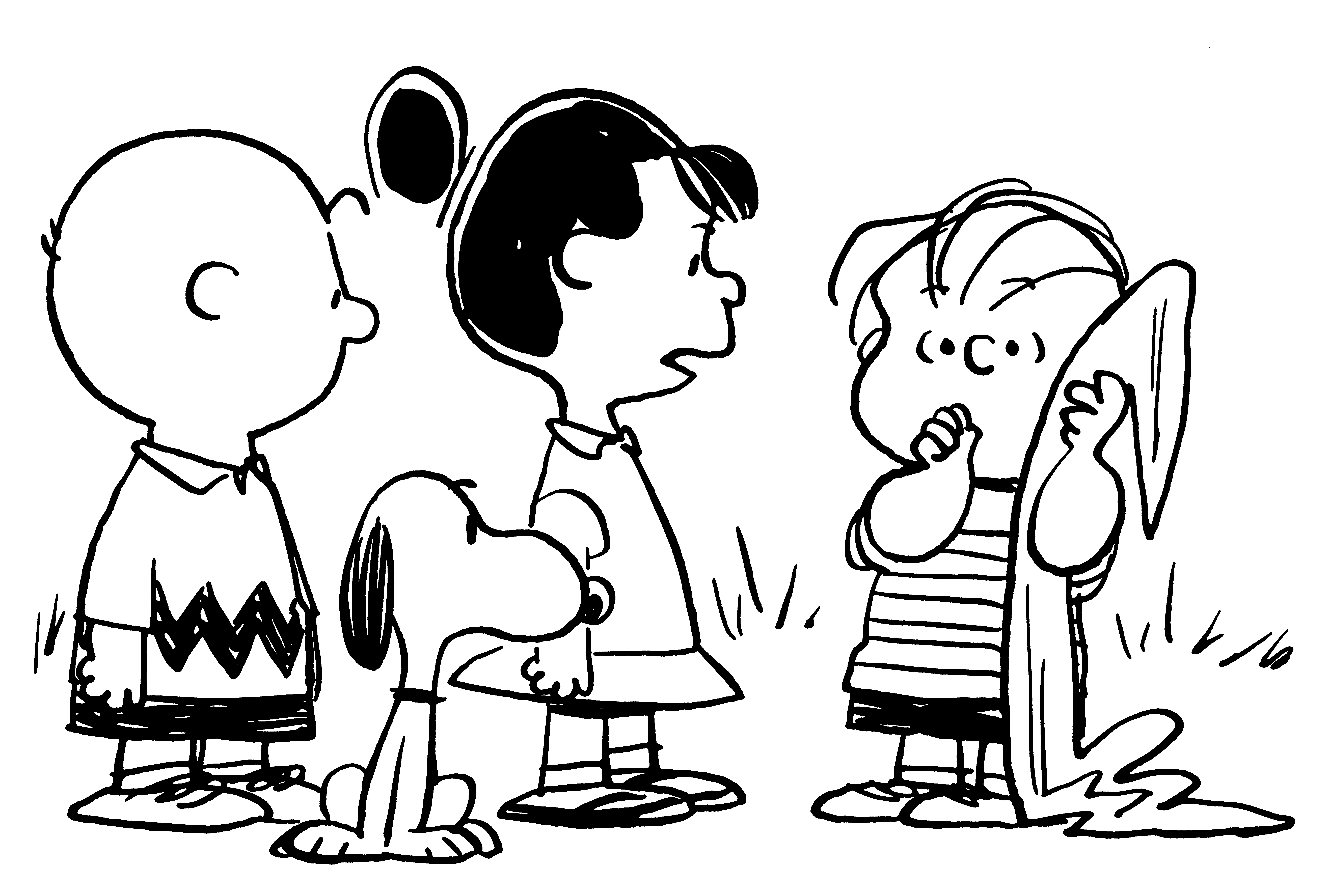 Linus’s security blanket inspired countless gags and many plots. It came to define Linus, who is in some ways the most astute character in Peanuts. In addition to offering sage advice and interpretations of scripture, Linus can wield the blanket like a whip and fold it into improbable shapes, and has struggled with Snoopy for it in action packed races across the comics page. The blanket has been cut up, ripped, stomped on, made into sports coats, and almost incinerated. In the end, for Linus, the security blanket is a symbol of comfort and solace in a confusing world. 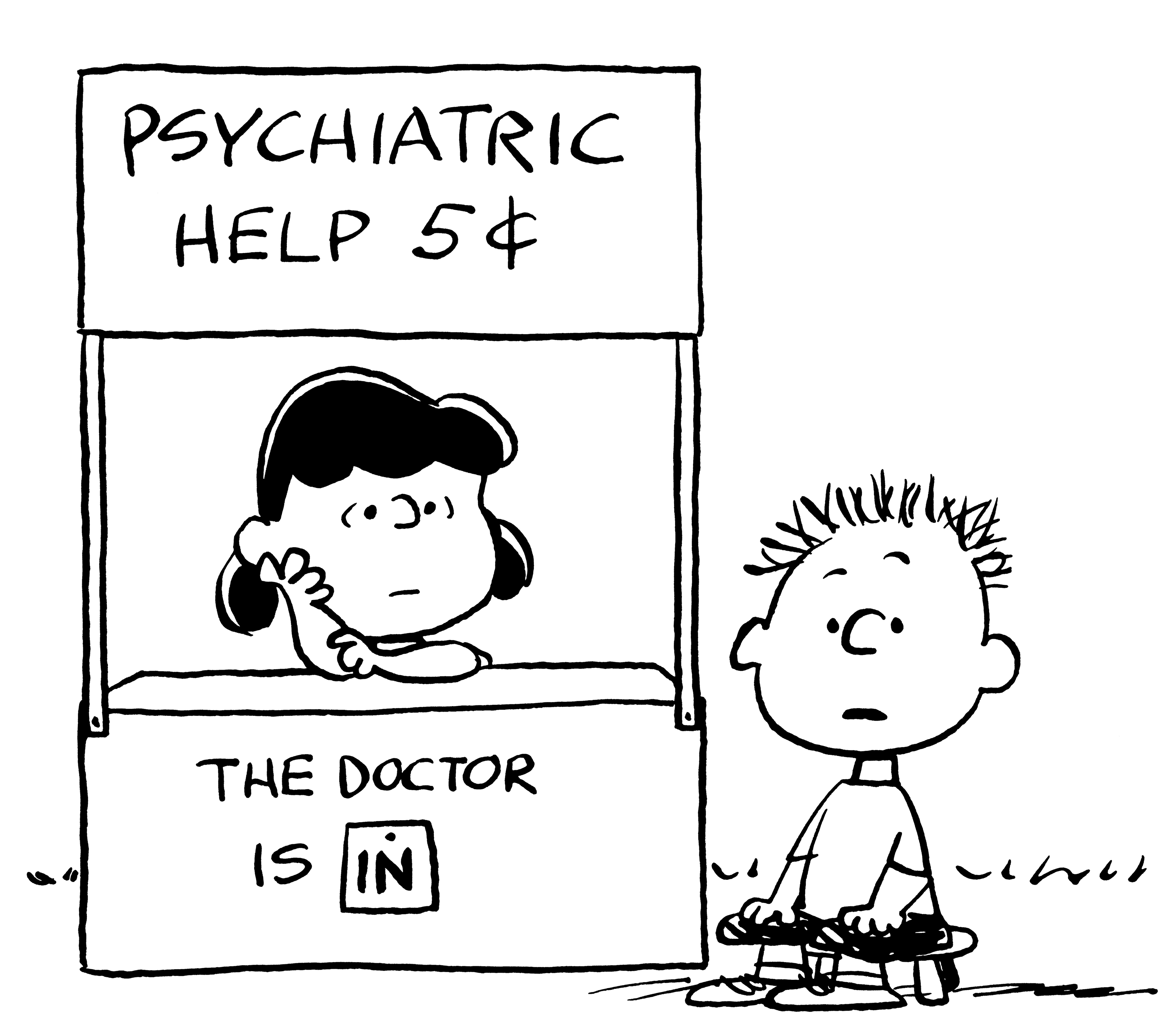 There has been much written about the psychology of Peanuts. As luck would have it, the timing of the booth’s introduction in the comic strip coincided with an expansion in the field of behavioral science. Schulz used the booth as a device for exploring such universal conditions as loneliness, insecurity, and depression. Schulz was an astute pupil of human nature. While Schulz was sympathetic to psychiatrists and their endeavors, he wasn’t necessarily trying to promote them. His pragmatism might be illustrated by the advice Lucy gives Charlie Brown when he wonders why he likes to be alone at times and at other times he feels so lonesome. “Try to live in between. Five cents, please.” 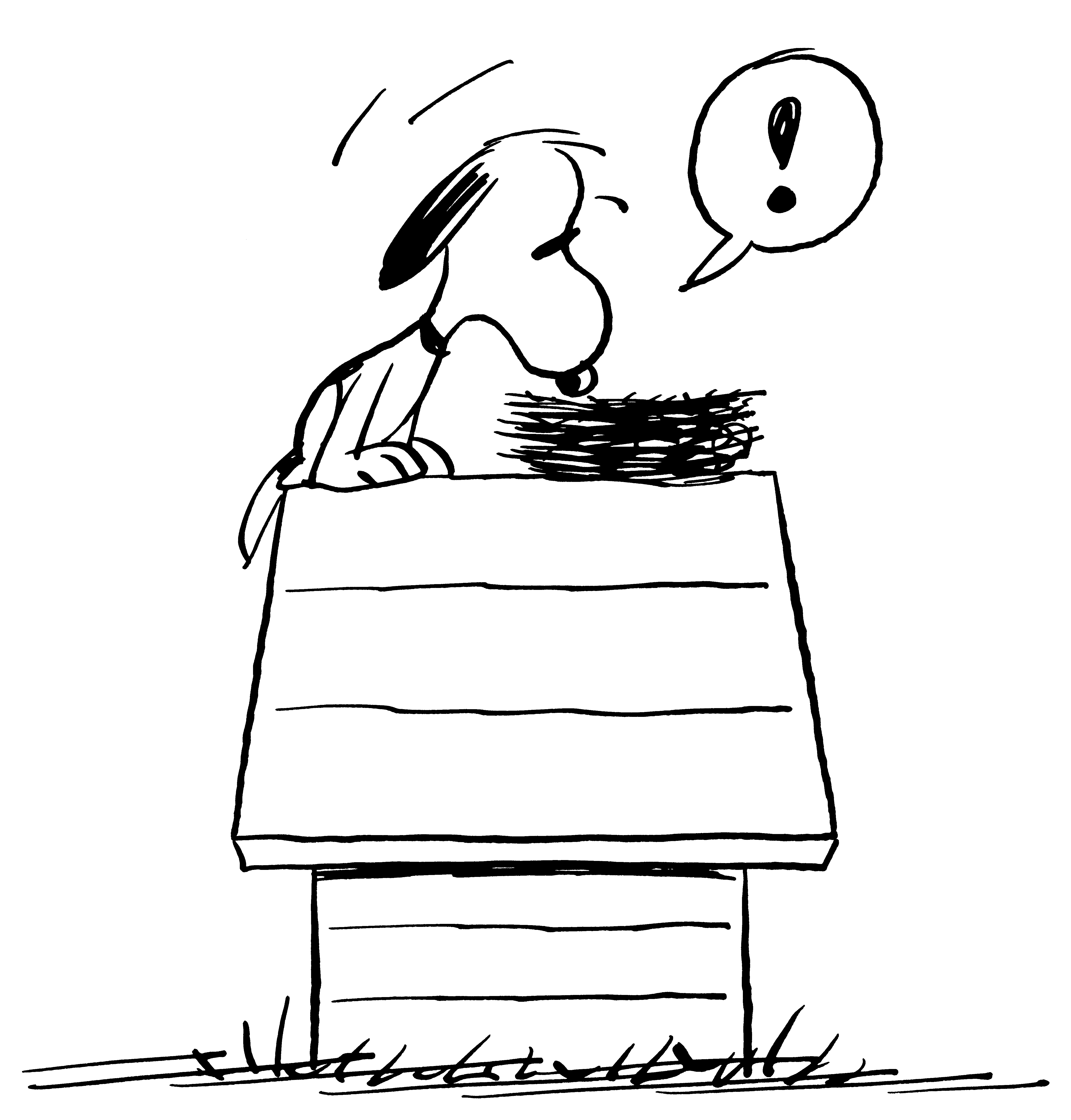 In the beginning, Snoopy actually slept in his doghouse, and a three-quarter view was the most familiar angle. Snoopy would lounge inside, with his head sticking out the door, just like a real dog. But Snoopy is so much more than a dog. As Rheta Grimsley Johnson wrote in her biography of Schulz, “The studious reader understands that the metamorphosis from doghouse to amphitheater of the surreal is closely related to the transcendence of Peanuts itself from a traditional kid strip to a solitary benchmark of the cartooning craft.” The “device” of the doghouse doesn’t relate so much to what the doghouse looks like, although that has become iconic, as it relies on the allusion of its properties of fantasy. Readers are never shown the interior, but rumor has that it contains, among other things, a pool table, record collections, and paintings by Andrew Wyeth and Van Gogh. The doghouse also doubles as a biplane, frequently taking flight as the Sopwith Camel. 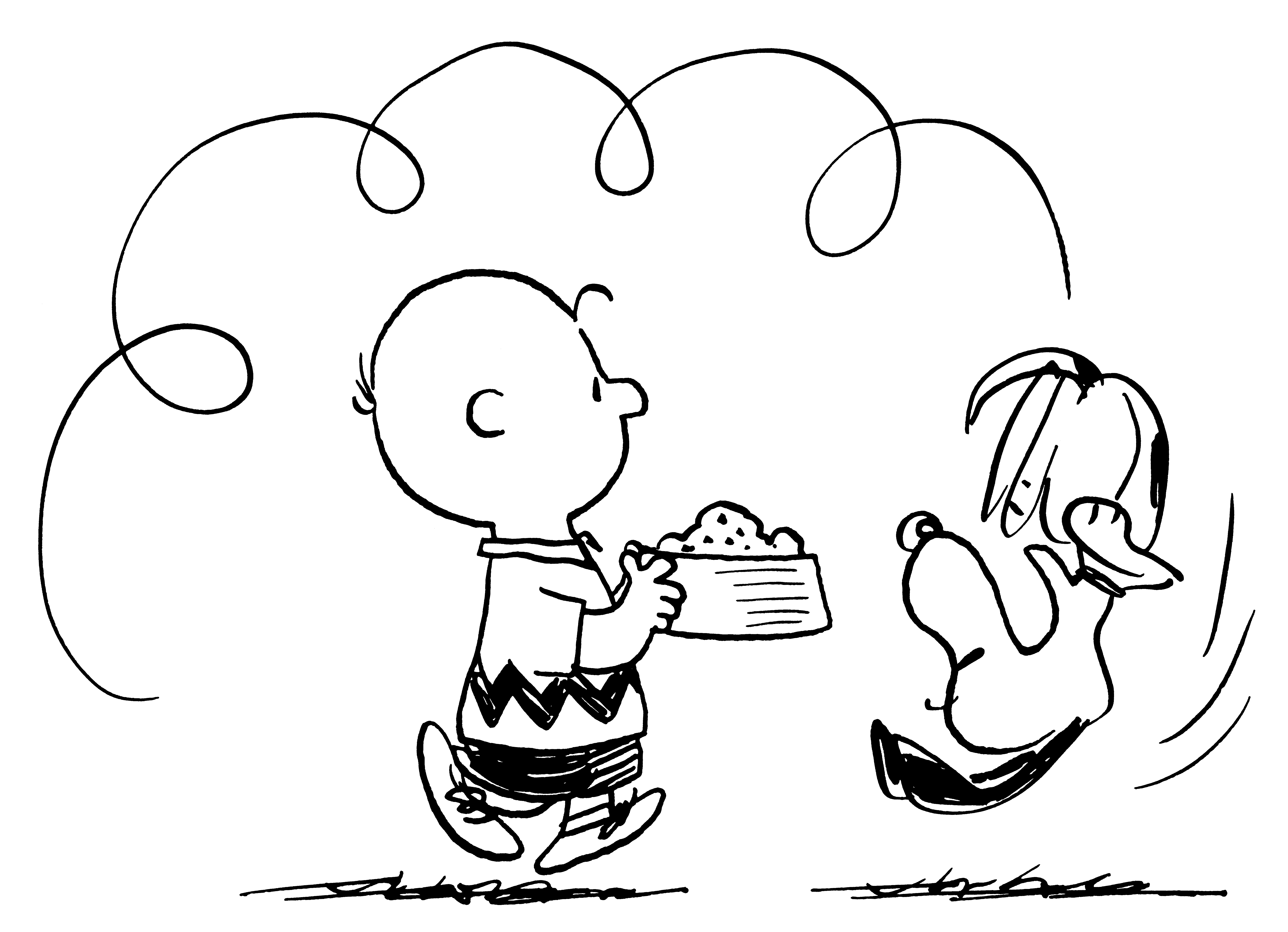 While Charlie Brown remains the unconventional, sometimes wishy-washy, central character around which all the action in Peanuts revolves, over the years Snoopy has almost stolen the show. Snoopy is the figure most readily identified with the strip worldwide, and Schulz conceded that Peanuts reached the height of its popularity on Snoopy’s doghouse. He started as a regular dog, but by the late ’50s Snoopy almost single-handedly delivered Peanuts from a nondescript midwestern neighborhood to a wholly original world of its own. 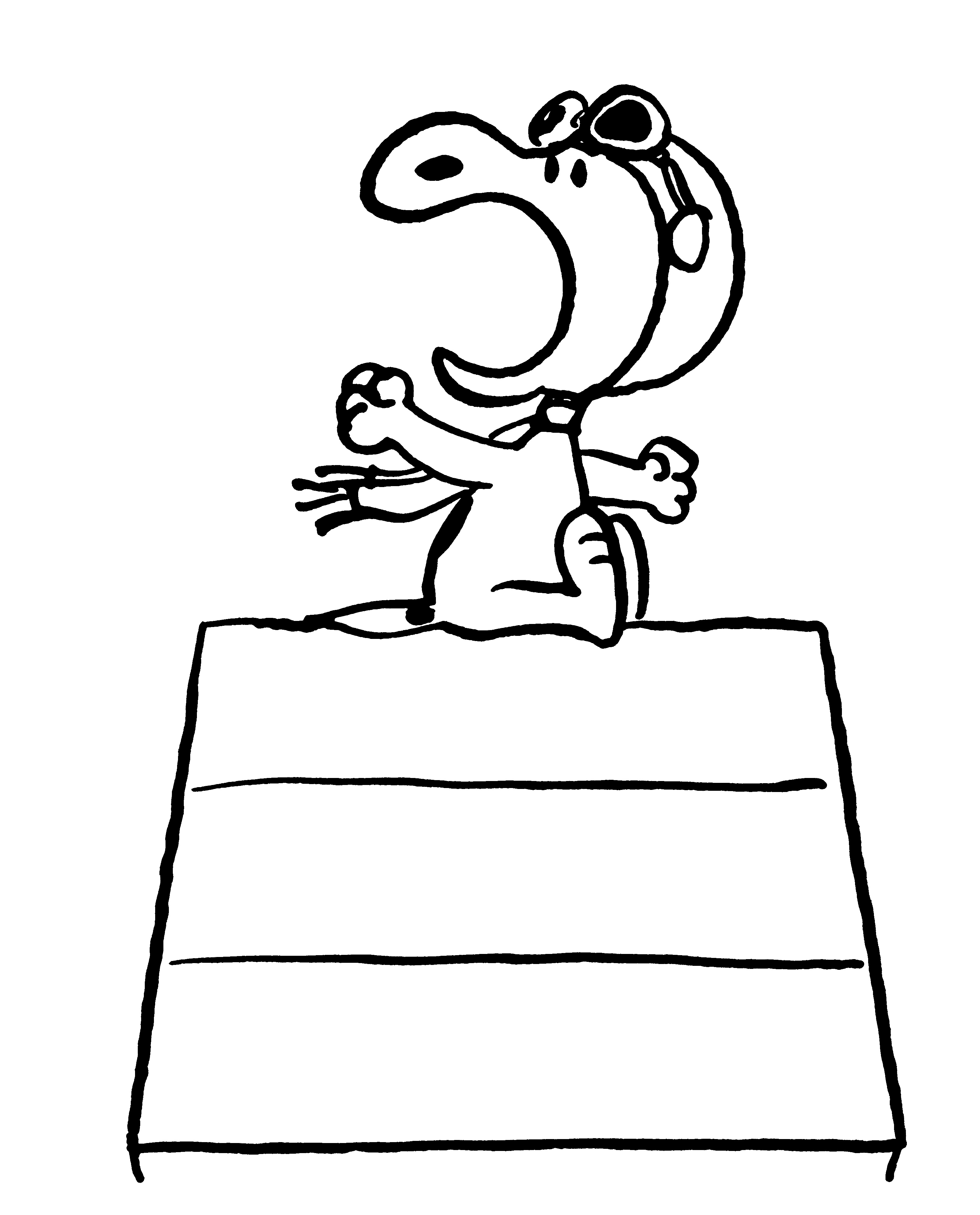 Fans would likely say that the strips featuring Snoopy and the Red Baron are the most popular Peanuts comics ever. Schulz abandoned the theme as the fury of the Vietnam War increased. Schulz said, “It reached a point where war just didn’t seem funny.” He later resumed the adventures of the World War I Flying Ace, but with more emphasis on love and loneliness than on crashing, smoke, and gunfire. 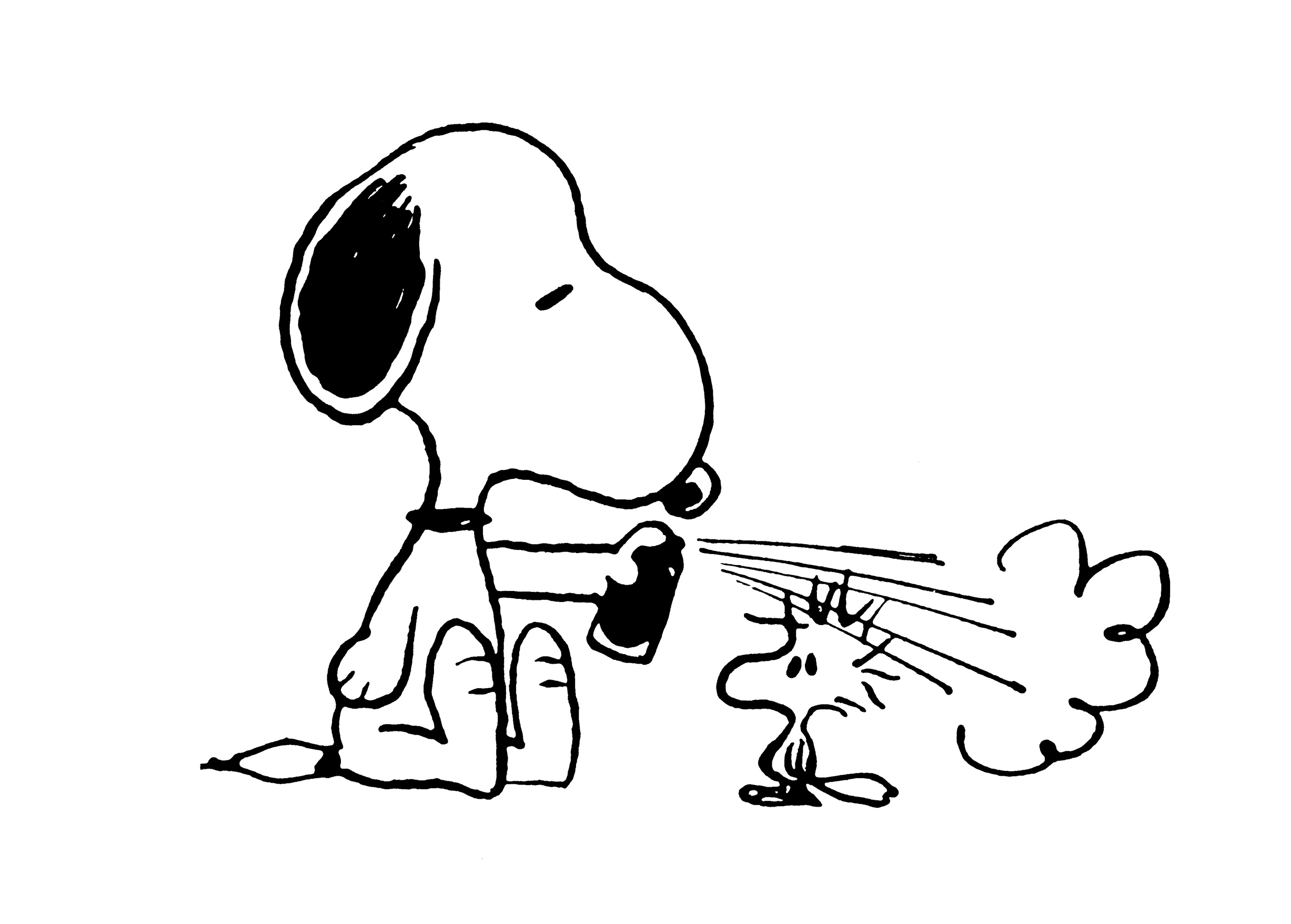 Every comedian needs a straight man. For Snoopy, that means Woodstock. Soon after Woodstock landed on Snoopy’s doghouse, they were pals. After all, Snoopy is the only one who understands Woodstock’s “bird speak.” Woodstock is Snoopy’s anchor to the “real” world. Whenever Snoopy’s fantasies take him too far afield, it’s Woodstock who brings him back to the neighborhood. The name Woodstock was taken from the rural New York rock concert that is remembered as a high-water mark of the restless ’60s, but Schulz said that had no significance. He just thought Woodstock was a good name for a bird.

The baseball games in the strips are as much about baseball as the Peanuts comic strip is about children. Tangentially. Baseball was probably the hardest-working device Schulz employed. It allowed for visual humor, like Charlie Brown getting his clothes knocked off or a fly ball bouncing off Lucy’s distracted head. The slow, deliberate pace of baseball made it a natural setting for the unusual discussions that are so common among the cast of Peanuts. And of course their team always loses.

Football in Peanuts is seasonal. It comes and goes every year in the comic strip, but it has never acquired as many inked panels as baseball. Football’s shining moment in the strip, of course, is the kicking gag, when Lucy pulls the football away from Charlie Brown. This gag has been running for sixty-five years and is a perfect example of one of the major themes in Peanuts, losing, and then losing again, again, and again. Those who think a comic strip should be more upbeat don’t really understand humor. Schulz was fond of saying that failure was much funnier than success. 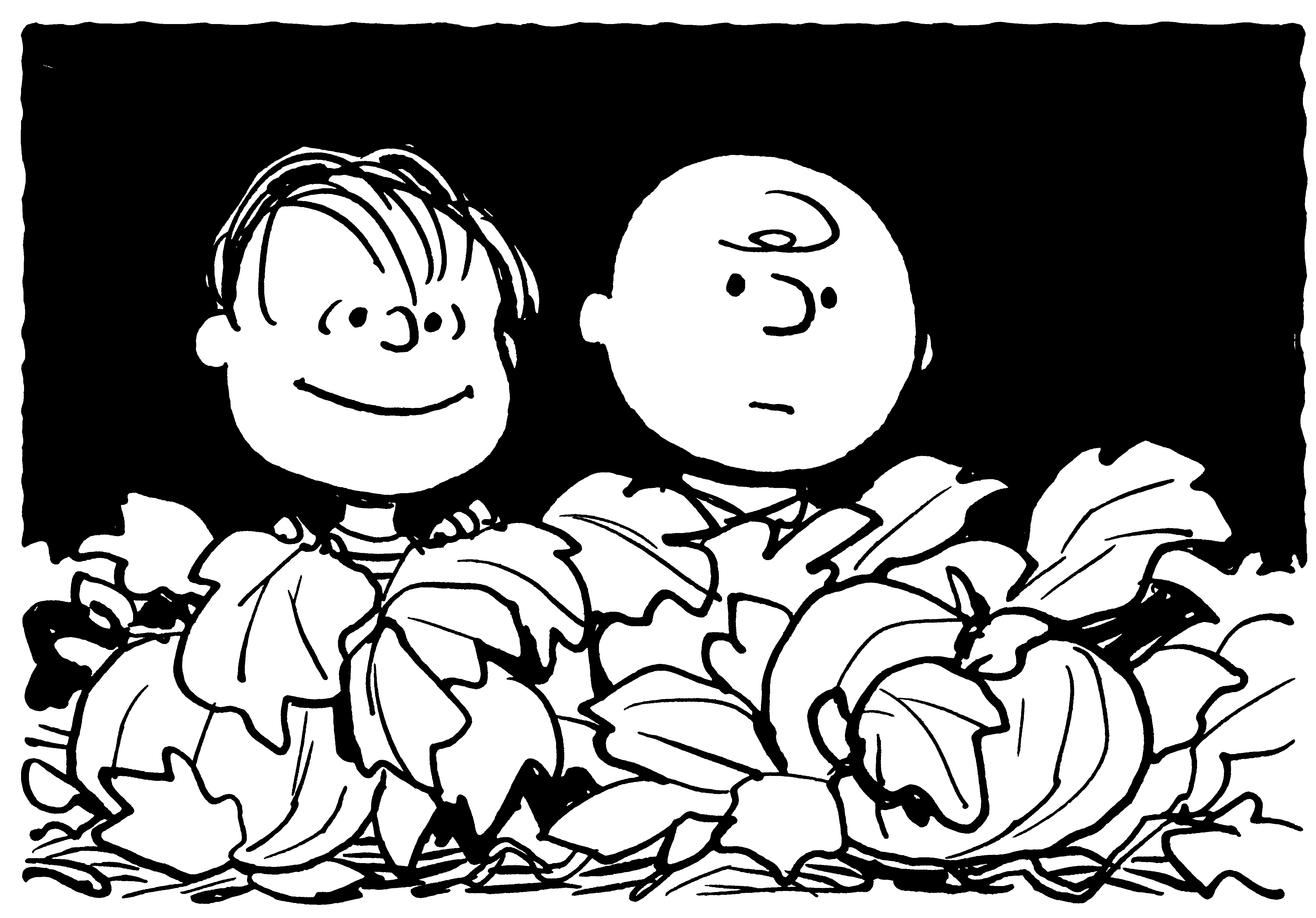 The Great Pumpkin is an annual event, like football. Linus is the most intellectual of the Peanuts characters. He’s also the most hopeful. Despite the fact that The Great Pumpkin is a yearly no show, Linus waits patiently each Halloween in the pumpkin patch for The Great Pumpkin to appear. Schulz said the idea was originally conceived as an indirect statement about Santa Claus and the commercialization of Christmas. Others have interpreted the story of the Great Pumpkin as a metaphor for faith. Believing in that which is unseen.

Hank Williams’s ballad “I Can’t Help it if I’m Still in Love with You” spurred the inclusion of the little red-haired girl in Peanuts. After listening to the song over and over again, Schulz was inspired to include in his devices the object of unrequited love. Since loss is the underpinning of Peanuts, a futile love interest was demanded. She is worshiped from afar. She should never be shown. Love remains aloof. The football is never kicked. The Great Pumpkin never comes. The winning run is never scored.

Schulz used these devices to spark his imagination and took each theme in a different direction with every strip. What ideas or motifs do you return to over and over again and how do you use proven concepts in new ways?

Need more inspiration before you submit a design to the Peanuts challenge? Check out our tour of the Charles M. Schulz Museum and Peanuts studios.