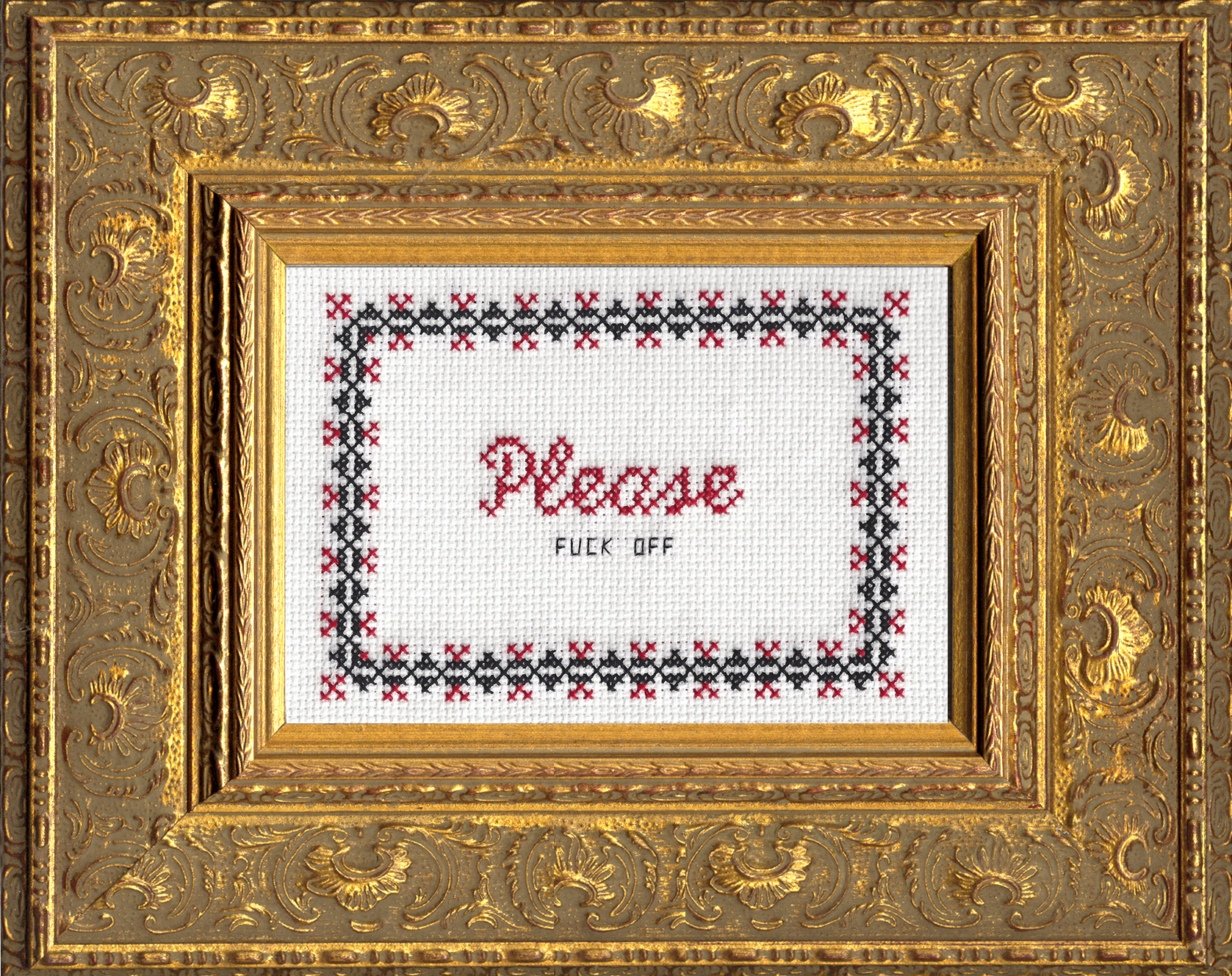 When faced with a terrible boss, some people quit, some people retaliate, and some people… cross-stitch. At least, that was the case for Julie Jackson, who turned to cross stitch to calm her nerves, only to find herself stitching expletives within intricate

borders of traditional pink flowers. Before long, her hysterically rude needlework took off, she launched her site Subversive Cross Stitch, a series of elderly women turned over in their graves, and Jackson’s former boss kicked himself in the shins for letting her go. Always interested in featuring her work on clothing, Jackson recently launched a Threadless Artist Shop, where her wonderfully disgruntled sayings are now found on tees and wall art. Learn more about Jackson below, and check out her Subversive Cross Stitch Artist Shop here.

Hi, Julie! Welcome to Artist Shops. Why don’t you tell us a little bit about yourself?

So, Subversive Cross Stitch ultimately came about because of a shitty boss, and was an instant hit. It’s like a movie plot. Does the irony of that make you feel fabulous?

Yes! It’s pretty surreal, I could never have planned it or funded it in a traditional way. The viral power of the internet has always worked for me; I was hooked from the start.

At what point did you realize your hobby, which you began kind of out of the blue, was becoming successful enough to grow into a career? How did you react to this realization?

I still can’t really believe it, it’s hard to explain. My husband had a successful career in advertising which was a big part; I always had a safety net until recently. Plus, I freelance copywriting mostly, so I always had a backup gig. It’s really a dream come true, but I realize it could disappear just as quickly as it happened, so I’m usually kind of a nervous wreck. It’s just us here at home, creating in a vacuum.

Most important: Did you quit on your shitty boss “Office Space” style?

Ha! Not exactly, but I was actually accused of “hacking” into my employer’s system when all I did was use WebMail to do extra work at home. You can imagine how frustratingly stupid my job was when the IT guy thinks using WebMail is hacking. It was 2003 and my boss had never even used Amazon and regularly said things like, “Make sure there’s film in the digital camera.” It was so demoralizing and idiotic, especially since I had just come from a short gig with a Top 10 interactive agency. I was so fed up in the end that I (unintentionally) made my boss cry in our last meeting because I just stopped trying to explain why they were wrong. It was definitely frustrating in that Office Space kinda way. I should have at least taken a stapler.

Instead of simply selling your pieces, you offer kits so people can create them themselves. This is a) a very smart business tactic and b) an awesome way to spread your art form. Why do you think it’s important to get people on the cross stitch train?

Cross stitch is so therapeutic, it’s ridiculous. I read articles and get emails from customers all the time that talk about how it’s a form of meditation. From the beginning, I’ve encouraged people to take my patterns and make them their own, or come up with their own designs. No two people will create the same thing and I think it’s so important to include the creative process in your life. I especially get a lot of mail about my “Fuck Cancer” pattern as it’s particularly therapeutic to those going through cancer treatment or close to someone who has been diagnosed. There’s something cathartic about stabbing a needle into fabric to express that sentiment. I even had one customer tell me that she buried her Fuck Cancer piece with her husband when he passed.

Where do you get your ideas for sayings, and how do you conceptualize the type of design elements you’ll pair them with?

I have a book full of ideas that I add to all the time. You’d be surprised how many phrases fly by on a daily basis that inspire new designs. They come from pop culture, friends, my crazy brain… everywhere. As for the designs, I try to keep them as simple and traditional as possible to keep the ironic humor factor strong. And I don’t want to discourage someone who is a beginner from trying it out. I stitch the ones I decide to offer as kits, but I also create a lot of patterns as downloadable PDFs (over 175 at the moment).

Is this the first time your work has appeared on clothing? If so, did you ever imagine it would find a home on people’s chests?

I have been waiting so long to find just the right partner with whom to create t-shirts and Threadless has always been our favorite shop, so it’s a dream come true! The only other time my work has appeared on a shirt was an NYC designer named SSUR used my “Go Fuck Yourself” design without my permission (I don’t think he knew where it came from). He did some cool sweatshirts in a very short run one season. We talked about collaborating, but it never came to be.

Does it strike you as funny to see cross stitches like “Fuck the dumb shit” and “Don’t be a dick” translated into different languages?

Funny you should mention that, as my first cross stitch book was translated into Dutch and the title was “Achterlyke Gladioli” which means something like retarded gladiola in Dutch. I don’t get it, but they say it’s very funny in Dutch. Also, I created a series of kits a few years back with the gift company Noted in French, German, and British English. Those were pretty cool, they were sold in museum gift shops.

In what ways have you found this unexpected venture fulfilling?

I love working for myself, I don’t think I’m meant to work for a boss who squelches my ideas (and most of them have). I don’t thrive in a structured office environment where there are senseless rules created to keep everyone in line and squash their dreams. It was especially fun doing Kitty Wigs because I can’t imagine writing a business plan for that idea and looking for funding, people would have looked at me like I was insane. Actually, I was asked if I’d be interested in doing “Shark Tank” for Kitty Wigs well after it had gotten a lot of press. But I would never go on a show to have people discourage my creativity and tell me why it would never work. I just keep my overhead small and go on about my business, creative freedom is MUCH more important to me than having to adapt my creation to fit someone else’s idea of what they think would work. I have zero desire to be famous, ugh!

You’re the youngest of 7 kids. Do you think being at the bottom of the totem pole helped hone your sassy smart-ass side?

Definitely. My siblings are all really hilarious and humor was valued more than anything else in my family. My dad always taught me to follow my bliss and find work that I love which was the best advice I’ve ever received. I feel extraordinarily lucky.

What would your grandma have to say about your work?

My grandma is no longer around, but my mother is 90 years old and my biggest supporter. When my first book came out she said, “I love your book, I keep it under my mattress”. In fact, there’s a great photo of her in the back of my new book taken by Ben Britt. She keeps me going.

Last but not least, please share with us your most favorite, most subversive saying of all time.

Go Fuck Yourself (not you, of course!)