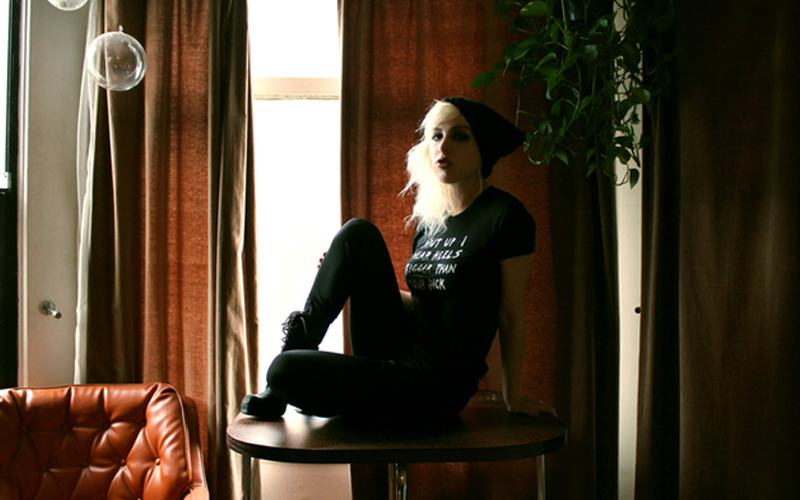 You wouldn’t expect a woman once called the “Rumpelstiltskin of raunch” to be the daughter of an Evangelical preacher born-and-raised in rural Texas. But with her new brand “Whiskey Helps“, Amanda Manitach puts the ‘graphic’ in graphic tees. 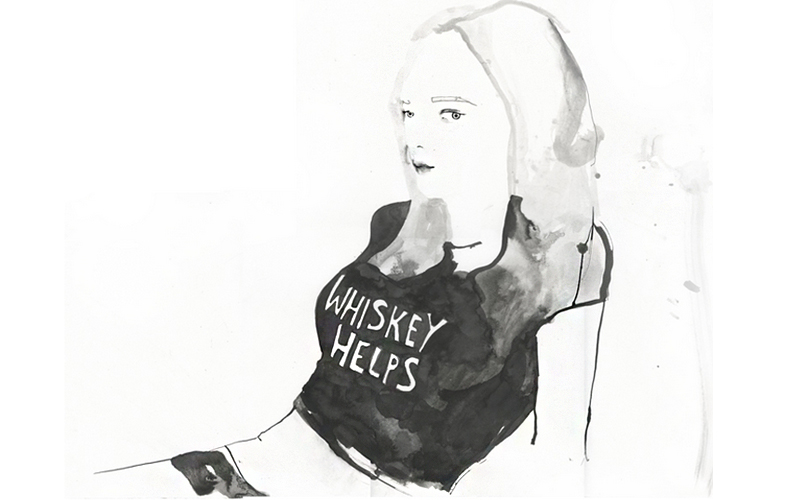 An arts editor for Seattle’s “City Arts Magazine“, Manitach delved deep into Seattle’s art scene after her mother committed suicide in 2009. “It made me re-consider my situation and life. I always wanted to be a part of the art scene here, so I dove in, hardly knowing anyone.”

We talked to this Seattle artist about her tees and the certain textual tension they evoke.

Similar graphic tees to the ones in your shop appear on the girls in your “T-Shirt Girls” drawings. Why did you decide to bring them to life?

When I started, I never intended to make actual shirts, but lots of people really wanted to wear some of the phrases represented in my drawings. It’s a funny departure to bring this fantasy world of T-Shirt Girls to life…then again, my T-Shirt Girls were a response to real life girls wearing t-shirts.

Artists making text-based t-shirts is nothing new. Maurizio Cattelan with his one-offs, Jenny Holzer, plenty of others.

How do you come up with the phrases that go on the t-shirts, both in real life and in your drawings?

Usually I’ll brainstorm with one of my best friends who churns out the weirdest, funniest things. He recently called me the “Rumpelstiltskin of raunch”—spinning dirty shit into gold.

That’s an amazing nickname – there’s an idea for your next shirt. What’s your process?

I pick from a pile of ideas I keep simmering in my sketchbooks.

For the finished image, I draw the text by hand (loosely based on Arial Black font). I use India ink with dip pens and brushes.

What does your “T-Shirt Girl” series mean to you?

I started drawing the T-Shirt Girls two years ago, inspired by companies that make text-based shirts and Instagram girls who model them. Using clothing as a way to express identity or agency is nothing new, but the fad of message-bearing shirts kept getting my attention. I think the sort of sardonic self-effacement in many of these shirts suggests a type of mute acting out not dissimilar from the silent, sexual theatrics of 19th and 20th century hysterics.

My girls are listless, oversexed figures who appropriate the gaze-inviting hypersexuality of fashion illustration, mid-century pin-ups and 19th century odalisques. In my mind there’s often a double entendre laden language that intertwines feminist self-objectification and self-empowerment.

Ultimately though, I’m most fascinated by how people respond to the texts. I like art that elicits visceral response, and I think everyone brings their own meaning to my work.

Your drawings are based on fashion illustrations and pinups – something directly connected to models who are meant to be seen not heard; living mannequins. Are the shirts you draw on your girls a way of giving females a voice in a society where they still don’t always have one?

Sure. Maybe it’s also a critique about the overall visual culture of what and who gets looked at. Who gets “read”—as long as she still shuts up, of course. Some people would prefer that my drawings weren’t so oversexed or sexy, but that’s part of the point.

What is your hope for people who wear your shirts?

Have fun with it and probably have some weird conversations.  I love a good piece of provocative art that doesn’t take itself so seriously it becomes didactic or intentionally divisive. I think the shirts ride that line. I haven’t had a chance to wear the Hitachi shirt but I sure will, and that will probably get some comments if people get that I’m talking about the Cadillac of vibrators.

I’m actually more a fan of gin, but nothing gets the job done like whiskey.