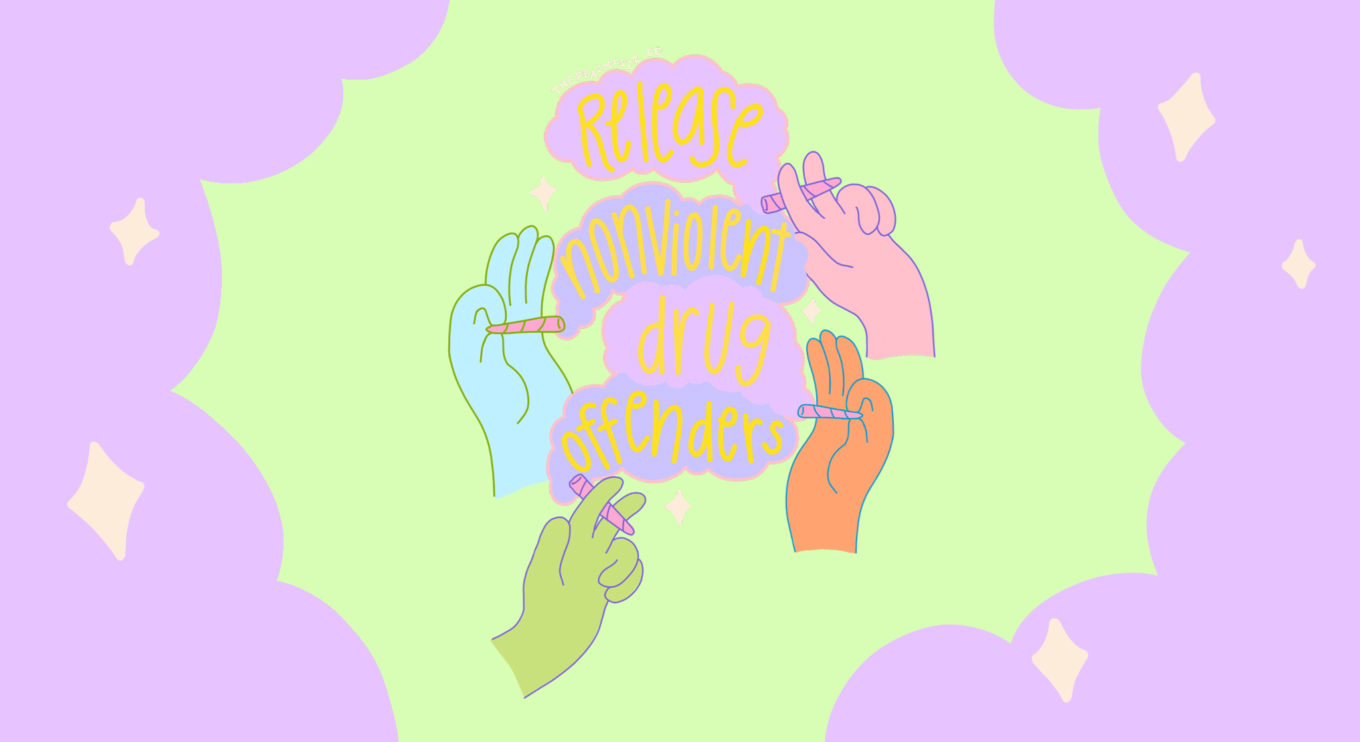 420 is almost here and you know what that means. That’s right, I’m talking about weed. The ol’ jazz cabbage. Talking about some whacky tobacky, the devil’s lettuce, the forbidden oregano, the Herb. Whether you love it, hate it, smoke it, eat it, grind it, roll it, wear it, stash it in a shoebox under your bed when you’re 18 then forget about it until you’re 25 and home for the holidays and you find it again and wonder if it’s still good to smoke so you sneak onto the back deck at 2 a.m. and light up only to see your grandmother’s face staring at you from the other side of the sliding glass door and just when you think you’re about to be grounded for eternity (can you be grounded when you’re 25? oh god what would that even look like?) she comes out and asks for a hit and you share a once-in-a-lifetime intergenerational smoke sesh under the stars—wait, what were we talking about? Oh yeah, weed.

If Half Baked is your favorite movie, and you’re embracing the holiday that Mother Earth gave us, then you’re in the right place. Here’s a rundown on all the tokers you might meet when you take the high road.

It’s not about how many times they partake; it’s about the attitude. The noob incorporates the mary iguana as a key piece of their personality despite being pretty bad at it. They’re prone to paranoia and like to ask questions like, “Do you guys hate me?” Maybe someday the weed will finally chip away at that mood enough for them to relax. In the meantime, just try to enjoy the ride.

By day they may be an accountant, or a high school science teacher, or a CEO. But one hit of the whacky tobacky sends this silly goose down an endless cycle that goes giggle, recover, eye contact, giggle, repeat. These folks are sunshine embodied, and their cheerful moods are totally contagious.

You’re gonna need to get out your notebook and pen for this herb enthusiast. They don’t just blaze it, they study it. This plant morphologist has a maxed-out rewards card with the local Garden Supply, yet has never once bought a plant from them…hmm… Not only do they know everything about every aspect of the forbidden oregano, they’re growing their own new strain and it’s going to blow your mind! They’re like if those basement micro-brew dudes took a chill pill.

Not to be confused with the botanist, the naturalist loves the herb but they’re more interested in filling their notebook with poems than biology notes. The naturalist smokes out of a wood pipe or rolls their own J in an upcycled page of Walt Whitman’s Leaves of Grass. For the barefoot and baked, I recommend a backpack to take this trip to the wilderness, and a blanket to lay under the stars.

They’re great when they’re sober, they’re great when they’re stoned, but the road between is full of potholes. (Haha, potholes. Didn’t even plan that one. Haha nice.)  It doesn’t matter if it’s their first or hundredth time blazing the grass, they’re going to cough more than a TikToker doing the cinnamon challenge in a field of flowers during allergy season. For these unfortunate souls, I recommend the “It’s Just A Weed Cough” Face Mask and a bag to bring along some cough drops and water. Or hey, maybe just using edibles because your hackin’ is freakin’ everyone out.

6. The Baker and The Snacker

Bakers love to bake their buds. They’ll spend hours in the kitchen playing mad scientist, formulating new, delicious recipes involving frosting and brownies and papaya. The Snacker is always packing treats. Before the roach is out, they’re passing out pizza. They’ve got DoorDash on speed dial. (I know that’s not how apps or speed dial works but you get what I’m saying.) As you can guess, The Baker and The Snacker are a dangerous combination. When paired together they can prompt an endless cycle of edibles, stoned, munchies, oh nice more edibles—uh oh how do we ever get out of this one? Both these stoners bring a little more sweetness to the world, and I love them.

A stupefying smoker, these are the sneaky stoners that make you say, “Wait, you smoke?!” How have you known them for 7 years but have never once even suspected? You never would have guessed it, but beneath their tidy, corporate exterior, they’re secretly hitting the oui’d. Part of you just can’t get over it. Part of you is starting to look back and notice some of those subtle signs.

Similar to the flabbergaster, the retiree shocks you when they ask to smoke with you. It’s been a minute since they sparked up a doobie of the Mary Jane, and boy, it shows. The retiree doesn’t believe you when you say weed has changed. They dive right in, and then you get to spend an afternoon reassuring your aunt Amber that yes, the high will wear off; yes, they’re going to be okay; no, you will not help them take their socks off, no matter how much they miss their feet.

Why would you pay for four years of college for a philosophy degree when you could just spend a weird afternoon with Jeff? If you’ve ever craved regurgitations of Joe Rogan and some Reddit conspiracy theories, make sure you find yourself a discount philosopher. Their catchphrase is, “Think about it.” When you’re ready to puff, puff, pass on the hot takes, just put on some History Channel. It’ll keep them occupied for hours.

You didn’t know there was a wrong way to smoke until you watched the wildcard cram a bunch of bud into a grilled cheese and eat it. It seems they have been smoking so long they kind of forgot that the public is not always super into it. The wildcard will light up at the most inopportune times, like during their nephew’s piano recital, or in the back of a bus. These stoners are charming, unique, and live most of their lives on a higher plane of existence. When you hang with a wildcard, you’re guaranteed to make some memories.

You never thought you’d ever have to answer questions like, “Is this joint organic?” or “Is this edible gluten-free?” But here we are. The health freak rattles off the health benefits of weed faster than Nicki Manaj hits a verse, and they wave their medical marijuana card around like a winning lotto ticket. If you happen to see a Prius with an NPR sticker getting a ticket, better give them a heads up. For the health freak, I recommend a t-shirt that says, “This high is FDA–approved,” and a notebook to keep track of their incredibly specific allergies. Let your freak flag fly high!

12. The Couldn’t Possibly, AKA The Mooch

There’s one in every blunt rotation. They “never smoke” until someone pulls the weed out. For them, I recommend a nice zip pouch, you know, in case they ever want somewhere to put their own weed.

It’s like they heard there was no such thing in human history as a weed overdose and took that as a personal challenge. Their casual wake and bake will send you right to beddy-bye. While you’re trying to remember where your hands are, they’re loading up the bong, AGAIN. If there’s a heavy hitter in your circle, don’t try to keep up. Tap out. They’re just built differently. For these stoners, I recommend alien attire, because their tolerance is out of this world.

Not only do many of our artist-made designs honor the most excellent herb, some of them even raise money for charities actively fighting racial injustice. According to the ACLU, African-Americans are almost four times more likely than white folks to get arrested for marijuana possession, despite similar usage rates. As we celebrate one of Mother Earth’s healing plants, Threadless Causes lets you wield your purchasing power to support organizations like The Bail Project. The nonprofit works to prevent incarceration and end racial disparities in the bail system.

Whether you’re into blunts or bongs, sativa or indica, you’re a daily doser or a part-time puffer, we can all agree, marijuana is one magically healing plant. So if you’ve got a medical card, good for you. If not, you can still appreciate the thousands of designs that hail to the chibba. There’s no harm in a responsibly worn canna-ppreciation t-shirt.

The design featured at the top of this post is “Release Nonviolent Drug Offenders” by ThePeachFuzz.