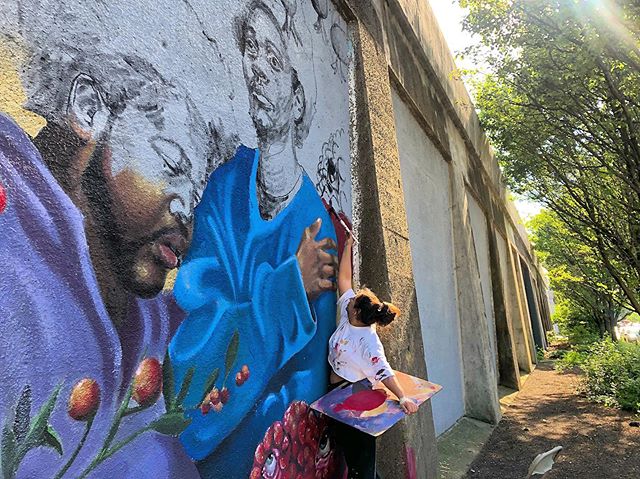 Rich in culture, history, and energy, the almost mile stretch between Halsted and May on Hubbard Street in Chicago’s Fulton Market is notably different than any other corridor in the city. Vibrant, surprising art covers the gray concrete walls of the viaduct that bisects what was once predominantly a meatpacking district. Ice cream melting off the cone, geometric shapes shifting into bold blocks of color, lone muses, and figures embracing are just a few of the many murals you’ll find walking the path under a historic train line. Welcome to the B_Line.

Portal to the Past

Aptly named for the phrase “making a beeline for something,” the B_Line is a direct path to street art at its finest. Here, artists from all over Chicago and the globe showcase their skills and vision for the future on a shared concrete canvas. But this inspiring swath of street art isn’t entirely new; faded colors and images are interspersed between fresh art, nodding to the artists who came before.

Today’s B_Line was known as the Hubbard Street Murals in the early 1970s. Originally founded by Ricardo Alonzo, the project began as a platform to share art that encouraged protecting endangered species. Alonzo led a group of students painting the Hubbard Street viaduct from Odgen to Desplaines during 1971 until the end of 1979 when the city’s funding ran out. Later in the 90s, several of Alonzo’s former students revived the project, restoring murals and creating new ones. The work was continued by volunteers in the early 2000s but went dormant following several lead volunteers relocating to other cities.

Champions of the Future

That’s when longtime Fulton Market resident Levar Hoard entered the story. He’d been living in the neighborhood and walking the corridor, wondering about the art’s history. Once he learned about the work Alonzo and his students did, Hoard reached out to the now Arizona-based artist for his blessing before contacting the Union Pacific Railroad to figure out how to get the project back off the ground. Now the B_Line has been active since the fall of 2017 when the first piece of the new era by Lefty Out There was unveiled during EXPO Chicago. We connected with Hoard, the creative mastermind and cultural muscle behind the B_Line’s renaissance, to find out how he stays inspired, creates community, and champions artists in Chicago and beyond.

“Esoteric and sometimes a disordered and messy process of self-doubt and expensive mistakes. But now that I’ve figured out what I’m doing more, I’ve been experiencing lots of growth in business and personal realms.”

What speaks to you about working in street art as a medium? What drew you to reinvigorate the B_Line project?

“I’ve lived in Fulton Market for over a decade and would always walk Hubbard Street and wonder what the history of the faded and crumbled murals was—so I found out, and it excited me. It took me over a year to secure the rights. But I did, and the rest is now part of the history of one of the first and largest street art districts in the country.

Street art is the most powerful medium because people don’t have to enter stuffy, no-talking, no-touching institutions and pay a cover charge for the privilege—it’s more accessible and you can reach more people with ideas and beauty. With over 200 murals under management, that’s more than 200 ways to connect to something. Art also brings people together and I’ve met so many of my neighbors that I wouldn’t have met otherwise. The art actually connects people.”

How do you balance what inspires your art and what you feel drawn to create? What do you do to refresh your artistic drive when you’re not feeling inspired?

“I am at the helm of a very large community of artists that keep this project going. At the end of the day, I’m community-building and am constantly inspired by other artists and how they think and their creative processes. Sometimes artists aren’t very friendly for whatever petty reason, and they don’t become part of the community we are building—good vibes only. When that happens, I take a step back, analyze “what had happen” (lol) and usually disappear to my place in Michigan to get away from the bad energy, get stoned, watch a few sunsets, and come charging back into the city to conquer the newest opportunities…and I am crushing, to be clear.”

How does being in the Fulton Market neighborhood influence the kind of stories being told by the art on the B_Line? How has the community and the greater Chicago community influenced the work?

“Ummm well, this neighborhood, Chicago’s old meatpacking district where we are located, has always been a home for creatives long before the cosmetics of the area changed. Artists were drawn here. I have many fond memories of being in these old warehouses and going to parties, or art studios, or a fashion designer’s atelier. Now that it’s expensive to have space around here, I just go to the new rich folks changing the vibes around here and challenge them to pitch in and help preserve the legacy with me and “go big or go home.” Rather than hate on it all, I have become an outspoken leader of this community, holding down the fort culturally. I always say “real estate developers are not cultural developers.” What I do now has become something of a “software” to the “hardware” of real estate. Together, we are creating a brand new neighborhood where the arts are firmly at the table.”

“At first, I thought the scene was under-developed here—and that makes sense when you consider factors like spray paint being illegal and Chicago just didn’t register on the global stage of street art as much as other cities. Now I understand it so much more and see the hidden talents here. I’ve come to be defined by my ability to locate new artists and give launch to their careers with their first mural commission, which in about five cases turned into multiple new commissions for them with new clients that discovered them on the B_Line. That feels good.”

What kinds of street art are you personally inspired by? What do you look for in new artists and their work?

“Bottom line—I respond to raw talent, vision, and techniques. Plain and simple. It’s easy to spot because it makes you feel some kinda way, you know? I pride myself on the fact that when you come to the B_Line, you’re going to see art, and styles, and names that you won’t find in Pilsen or Logan Square or anywhere else in the world for that matter…and a few that you might see elsewhere. The B_Line is developing its own identity organically, and that’s pretty cool.”

What would you tell people who haven’t walked the B_Line yet to check out while they’re in the neighborhood.

“It’s not done yet, lol! We’re only about 20% into this effort to revive this historic street art district that spans more than 14 blocks and stretches for over a mile. Mostly I’d say to start at Halsted and Hubbard and walk west to May and Hubbard to see the core of the revival. And while you’re at it, duck down open tunnels along the way to see the surprises that await you…”

“Don’t listen to haters. Surround yourself with patrons of the arts and people like me that are willing to put their money where their mouth is and take a chance on an unknown talent. And don’t stop painting! Find a voice in your work and keep developing that voice until you perfect it, then find a new voice and try not to get pigeonholed into one style or be considered a one-trick pony.”

Learn more about the artists featured on the B_Line right now then head down to Halsted and Hubbard Street to explore their work. Consider donating, volunteering, or submitting your art to further the project by reaching out to the B_Line team.