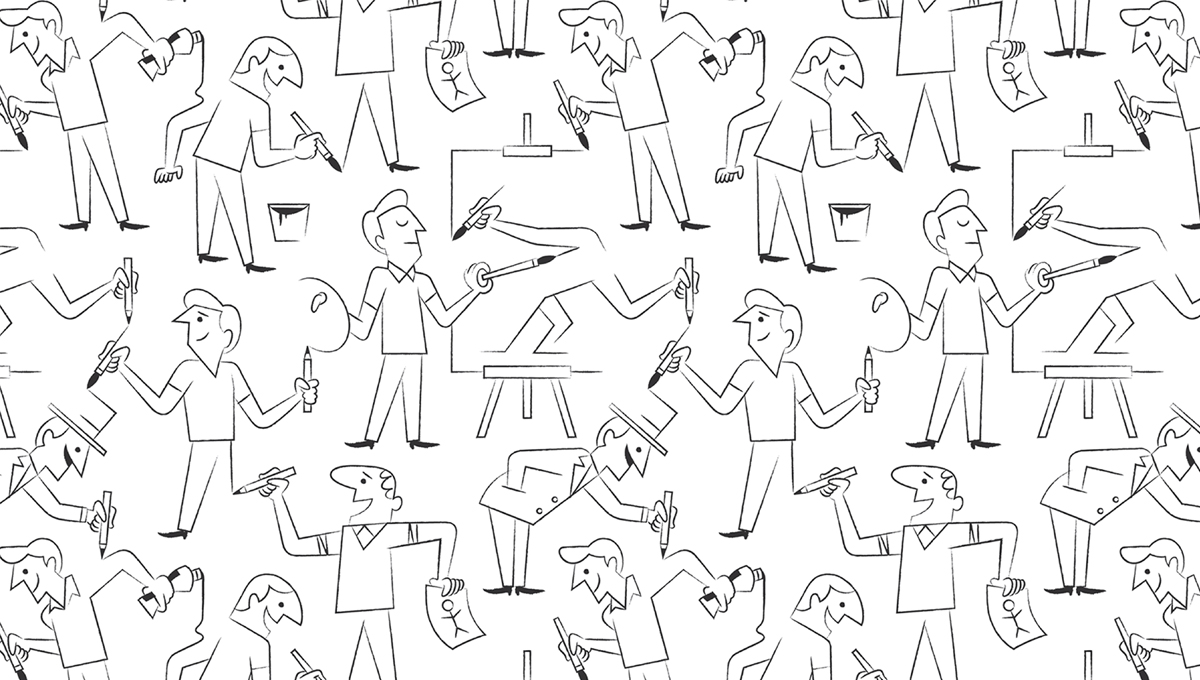 Creative teamwork is a powerful thing. Collaboration between two artists can bring ideas to fruition that wouldn’t otherwise exist. Creative mind Evan Ferstenfeld (@frickinawesome) has done hundreds of collaborations on Threadless, but it’s one of his most recent collabs with artist Vincent Caduc (@weird&co) that he’s most proud of; so much so that he wanted to tell the Threadworld! Learn how “Making Great Together” happens by reading Evan & Vincent’s story below!

Even after 500+ collaborations with hundreds of ridiculously amazing artists over the last decade on Threadless, there remains a magic to the collaboration process that feels like a fresh adventure every time; one experience is never the same as any other. So when Vincent Caduc and I started working together on “Endless Creation“ – our first collab in a couple of years – neither of us thought it would turn into the highest scoring collaboration of my Threadless career. But then again, some things you just can’t plan.

Of the two dozen ideas I sent to Vincent, the one that resonated most with him also had the shortest explanation and largest room for concept expansion:

A couple of days later, Vincent sent his first attempts at the idea with a simple, clean, and focused style which was inspired by a childhood picture book that Vincent used to read: 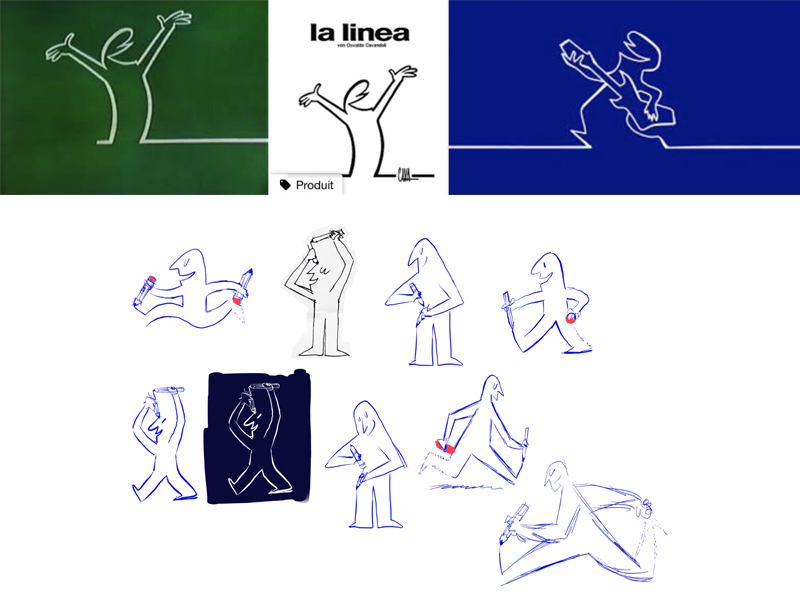 I was most drawn to the two characters in the upper left of this page of fantastic sketches, telling Vincent the character drawing one leg and erasing the other gave me the impression of, “each human is but one long line of which we only control the moment we are in, with everything before an erased memory. We are constantly in motion and hurtling towards our futures filling in the outlines of our lives from moment to moment.” 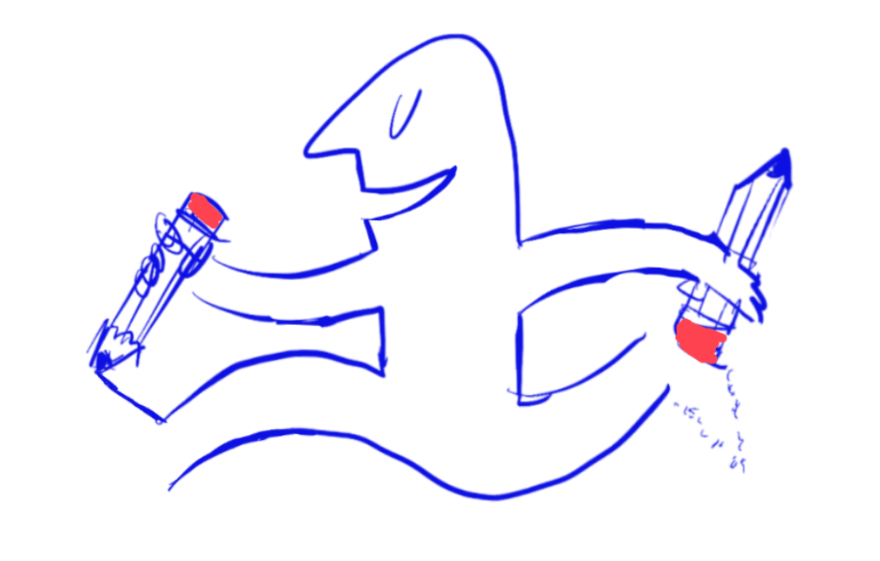 However, the character drawing the pencil that is also drawing himself is the image that most appealed to me from a conceptual standpoint. I wrote to Vincent that we could expand this idea to include a variety of characters drawing one another with different art media, linking them all together with no beginning or ending in a playful homage to a continuous MC Escher illusory pattern.

In Vincent’s words, “The more Evan and I exchanged emails, the more the idea and the concept was evolving. It was a very intense and creative exchange and series of rebounds on each other’s ideas to come up with the final concept. I was excited and nervous at the same time because I had never done such a complicated exercise.“ 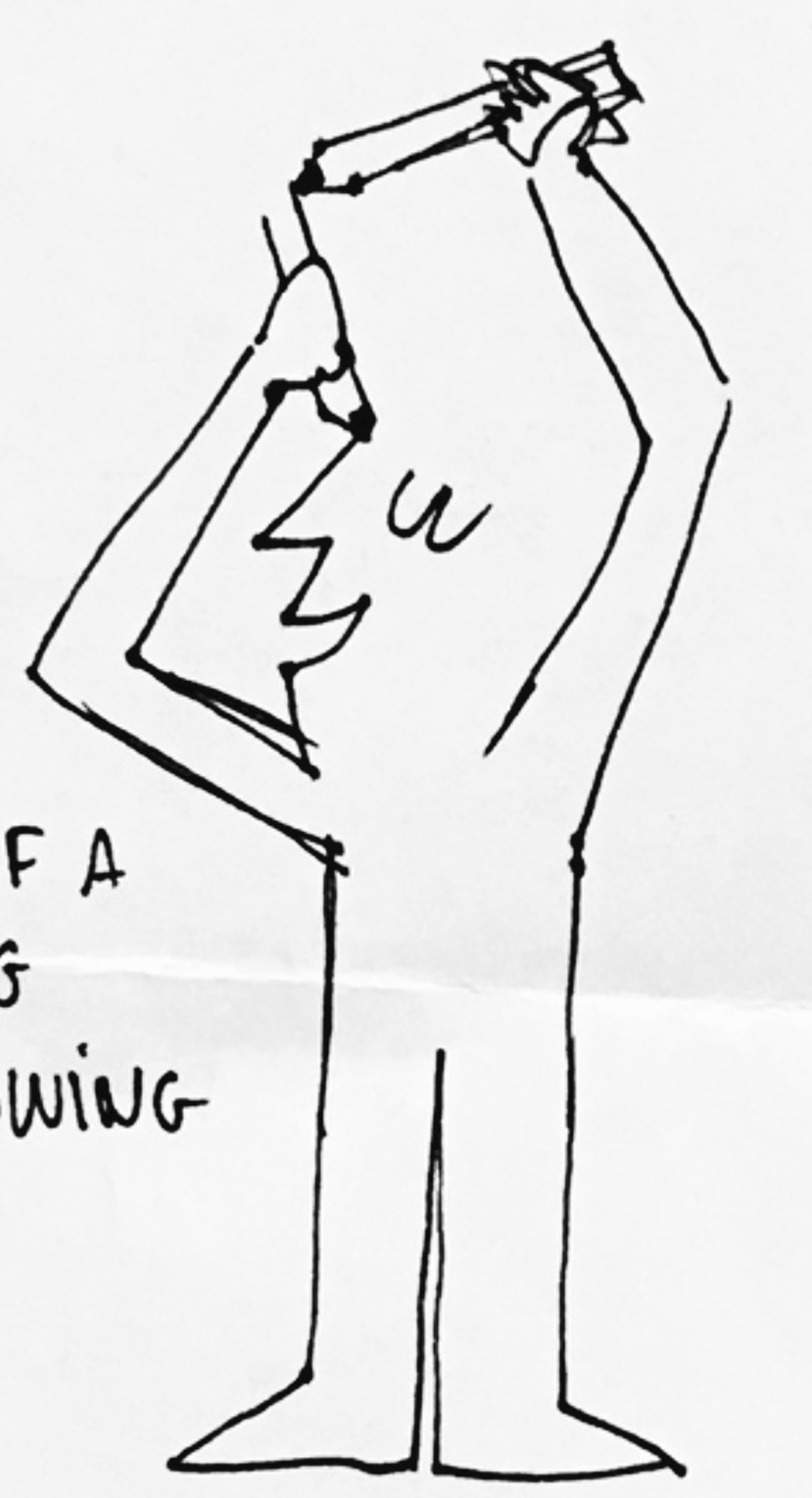 A few days later, Vincent sent his next sketch: 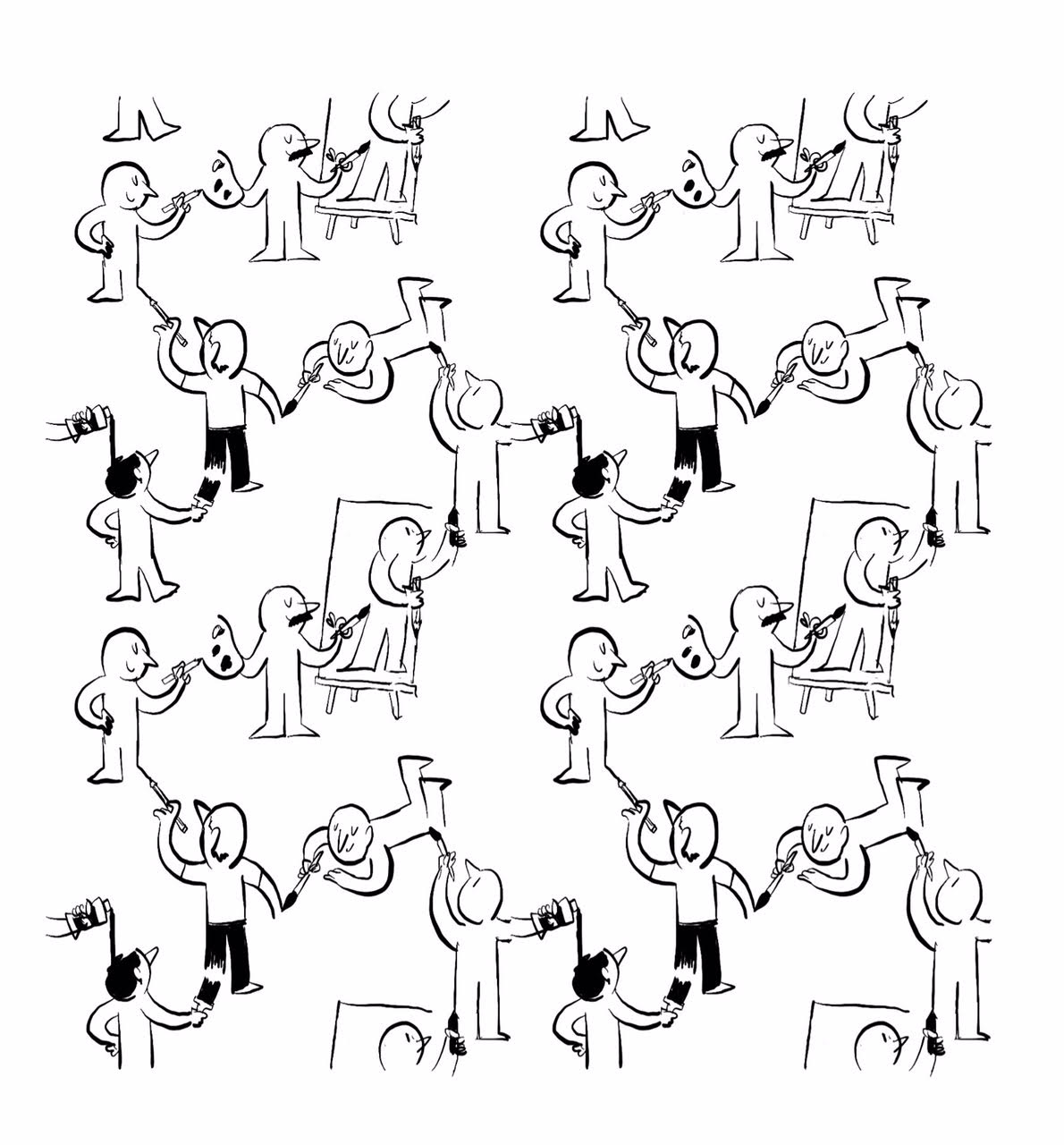 I knew at this point we were on to something special, as Vincent on his first attempt had already captured the flow and tone of what would be the final design. We discussed line width and refining the character style and a couple days later, Vincent had produced the continuous pattern that would form the blueprint for the final form of the design: 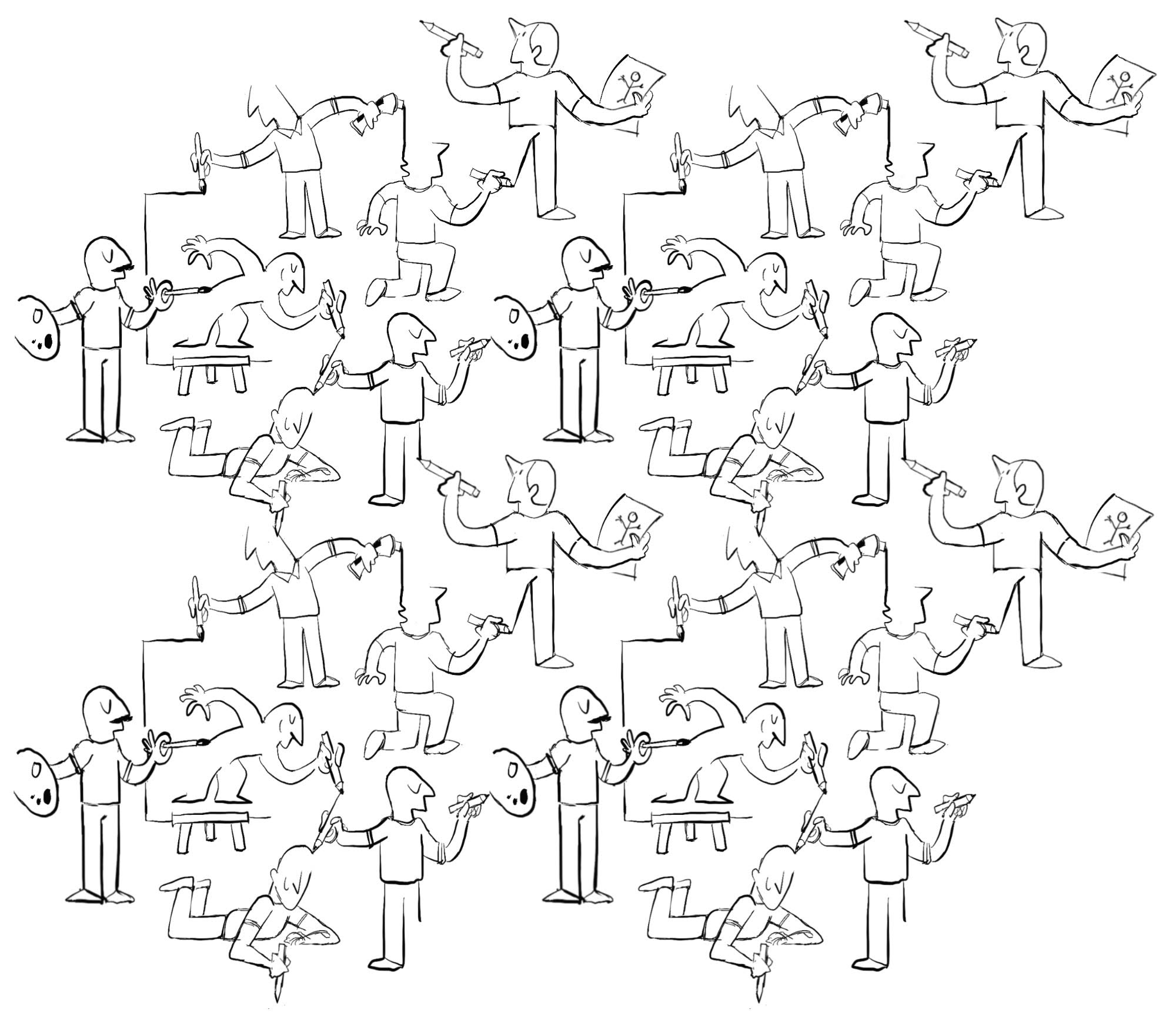 I made some suggestions to change some of the facial expressions and eyes, as well as completing more of the canvas one of the characters is painting on. After a two week break as Vincent went on vacation and did more pondering on the design, he sent me a new version that was no longer a repeated pattern, but focused on the connection between a group of characters in the center of the shirt: 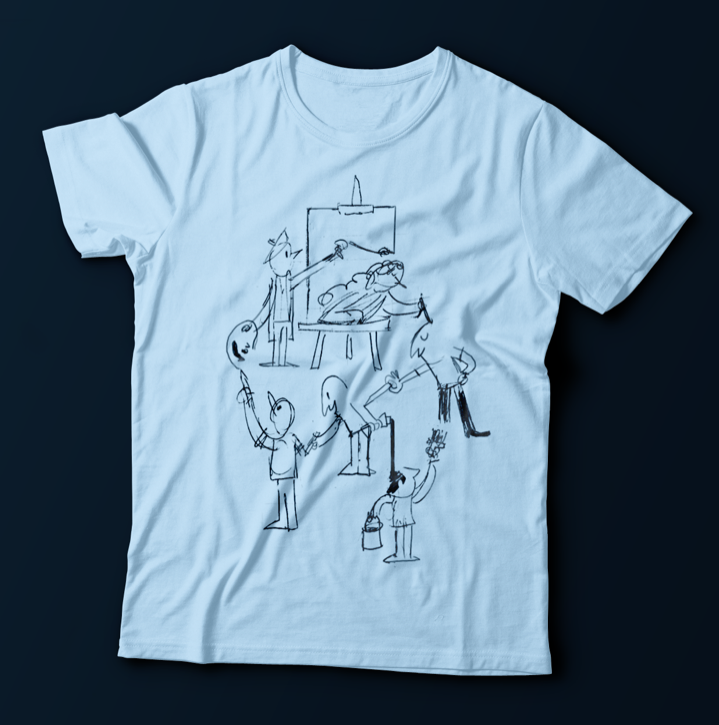 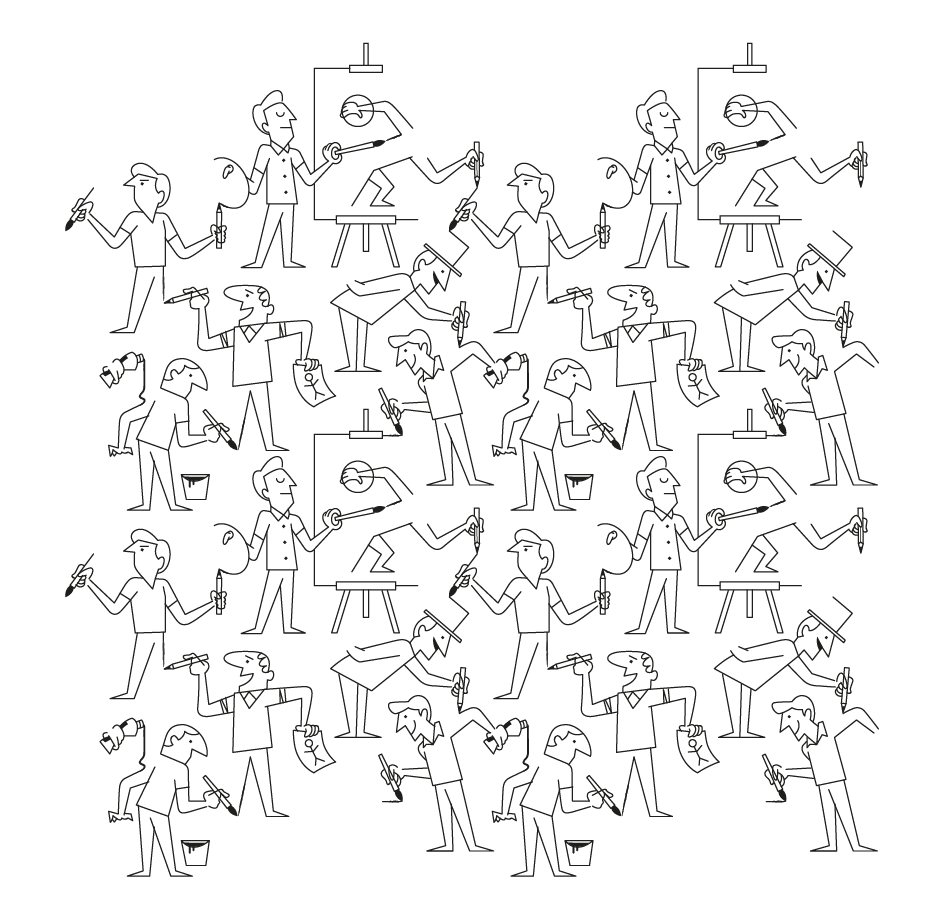 We both agreed this latest version of the all-over concept was the strongest variant by far and knew we had made the right choice. As Vincent puts it, “I spent hours filling the blank spaces between the characters, duplicating and deleting again and again, and sending a bunch of emails to Evan to share the progress and to get his opinion. But in the end, it was worth the efforts.“

As the concept expanded, it became less about just the individual and more about how the things we create are influenced by the art all around us and the people who leave an impact on us along the way.

Before submitting the piece to Threadless, we needed to finalize the name. My first title was “Create Yourself”, but we eventually settled on “Endless Creation”.

As the concept expanded, it became less about just the individual and more about how the things we create are influenced by the art all around us and the people who leave an impact on us along the way. This constant loop of inspiration through others then, in turn, creating your own works, this work inspiring others, which then helps keep the infinite loop of creativity thriving is the main theme of the design and the lifeblood that pumps through Threadless and its art community.

I am forever indebted to Threadless and the nearly infinite amount of inspiration I have received from the friends I’ve made and the art they’ve shared here. Vincent’s final thoughts on the design sum it up best:

“This was by far my best creative collaboration. We worked hard and were satisfied with the results, even more when we saw the number of kind and positive comments on Threadless. Apparently, it’s always a good thing to work outside your comfort zone!”

Bonus: This is as far as we got on the original, singular version before switching gears to focus on the all-over design concept: 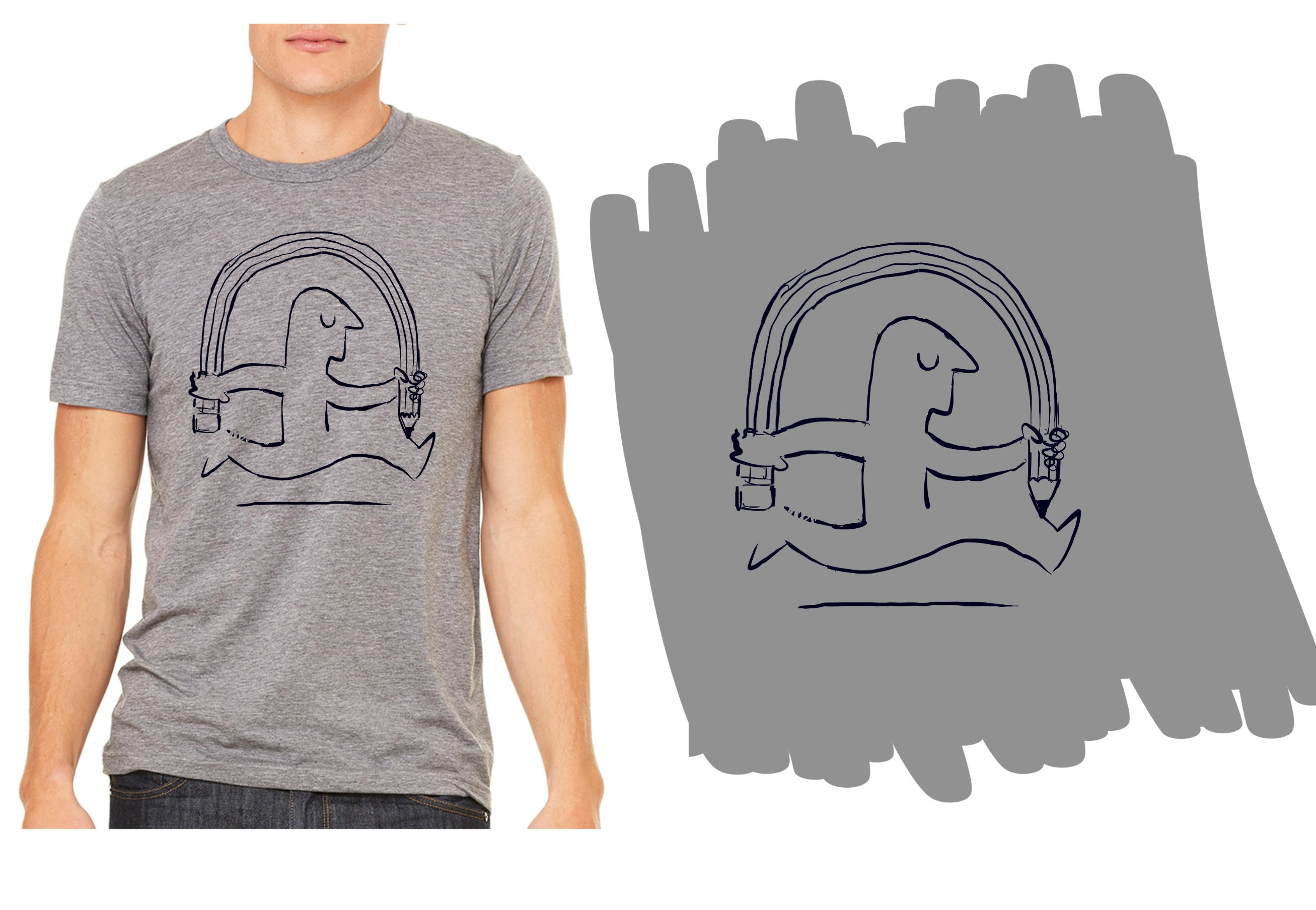 You are Threadless. You make the ideas, you pick what we sell, you're why we exist. Threadless is a global artist community on a mission to encourage creatives everywhere to Make Great Together.