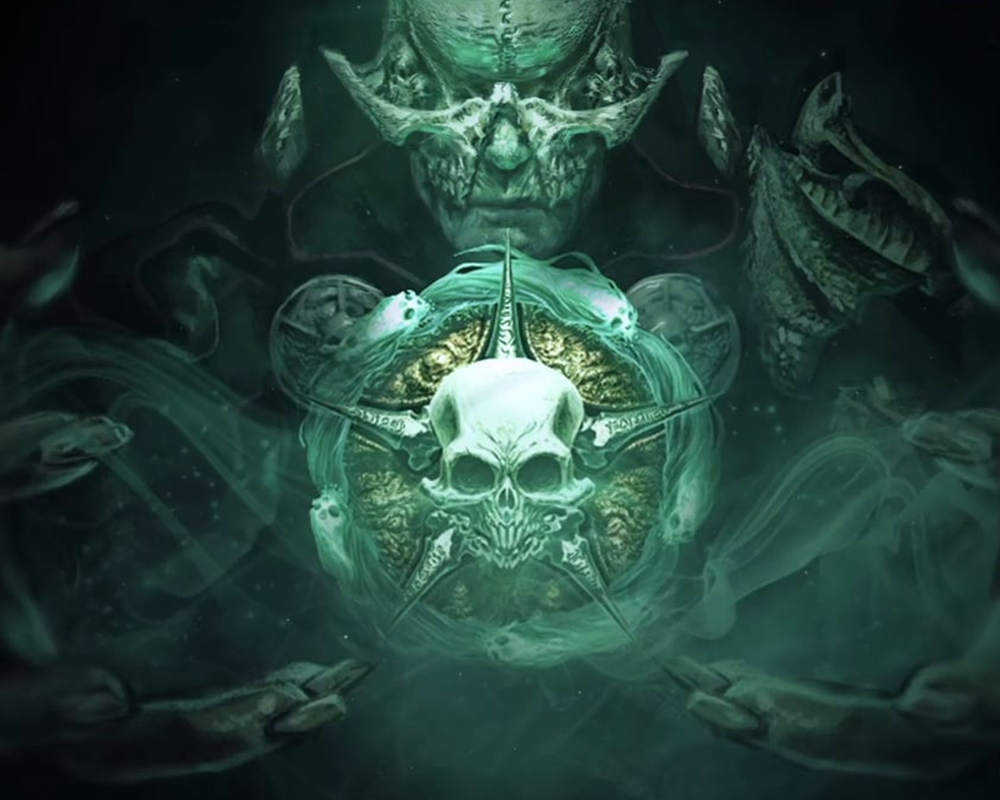 The battle between heaven and hell is a story we’re all familiar with. But Court of the Dead puts a spin on this tale that creates something original and awesome through the lens of a new player in the game: Death. Because when heaven and hell are at war, where does that leave the underworld?

Court of the Dead is the first original storyline made by Sideshow Collectibles; the company known for their hyper-realistic figurines. Sideshow tells the story of Court of the Dead through beautiful premium Format ™ figures, as well as over 140 digital comic book pages, a 200 page handbook of the Court’s universe called Chronicle of the Underworld, art prints, and some rad jewelry, along with plans for tabletop games and more. All in the spirit of wanting “fans to be able to live and breath the Court of the Dead.” And we want that too! That’s why Threadless has teamed up Sideshow for a Court of the Dead Challenge that offers some seriously hefty wins.

We did a Q&A with the mastermind behind Court of the Dead and chief creative officer at Sideshow, Tom Gilliland, to help you find out more about the story and what he’ll be looking for in challenge submissions. Find out more below!

When did “Court of the Dead” begin?

Unofficially, Court of the Dead is a lifelong project for me, I’ve been obsessively daydreaming about this world since childhood. Officially, the brand was launched in 2013 at San Diego Comic Con, with a robust gallery of 2D art and 3D sculptures.

How did this idea come about?

I’ve always been drawn to darker heroes – characters like Elric, Batman, Clint Eastwood’s Man with No Name. I wanted to create a world that had that same level of genuineness that I’d read in big fantasy epics and experienced in role-playing games. Tying these two influences together, I essentially created my own answer to the ages-old superhero team. Only, my version of this group has a darker heart and is on a path to redemption. They are anti-heroes in pursuit of a more noble ideal.

The core concept of the Court of the Dead is that Death and all the inhabitants of the Underworld are mindful of their own destructive nature, which they are fighting to overcome in order to save the world. They want to save not just their world, but the Mortal Realm, too – despite being highly unlikely heroes.

This is Sideshow’s first original property! What led to the decision to start the Court of the Dead story?

For the past 20 years, I’ve been working on licensed properties – such as DC, Marvel and Star Wars – and it has been highly rewarding…but nothing fills the soul more than pursuing your own creations. Along with the high-end, branded replication that we’re well known for, Sideshow was conceived with the talent for original conceptual expression in our DNA. Time has been slipping by and the call of our early ambitions to create original character content could no longer be ignored.

What was the process of building this world?

I wanted to concept essentially everything from scratch rather than borrow from classic literature. The design objective I put forth was to create a mirror to our world – albeit one that’s standing on its head. This led to many late nights drafting up the rules for the world, and then introducing the character archetypes I wanted to populate it with.

Once the framework was established I began adding collaborators to the project, to help me flesh out certain themes, characters and locales through illustrations and 3D explorations.

While this was a monstrous effort to manage, the reward was huge. Nearly every day my Inbox was packed with the ever-expanding universe. My walls here at the office are all cork board and they were dripping with new art to savor and develop. Crypt by crypt we built the Underworld and its protectors from the Death, the Alltaker, on down to the lowliest mourner.

What’s the story behind the Court of the Dead world?

Heaven and Hell used to be united as one realm, but they have both fallen to the lure of power and are deadlocked in a stalemate war. They are both greedy and ferocious forces, interested in neither salvation or damnation; They care only for more souls to subvert for their ongoing war.

The protagonist in the Court of the Dead is Death, the Alltaker. I guess there’s no short answer to this question, but understanding the Alltaker and his history and role in this universe is central to understanding the Court of the Dead. He is a celestial orphan, created when the originators of Heaven and Hell destroyed themselves in an attempt to end the war and bridge the gulf between kingdoms. Unfortunately, their attempt didn’t end the war, but created three realms of existence: Heaven and Hell, the Underworld, and the Mortal Realm. Heaven and Hell need the souls in the Mortal Realm to fuel their war, but the effort required to get to that plane of existence is too great. And so, they have enslaved Death and the Underworld with harvesting souls for them.

Over time, the Alltaker grows in compassion for the mortals. He is intrigued by their curiosity and creativity. And so he begins to secretly plot a way to end the war between Heaven and Hell, to end the Underworld’s soul-collecting servitude, and to free mortals from an afterlife cycle in which they are little more than foot soldiers in an endless battle.  If you would like to know more about him, you can read this blog post.

He formed the Court of the Dead – an evolving  group of 12  characters – to help him maintain the precarious balance of placating the celestials and squirreling away power to rise up against them some day. The Court aides Death in overseeing the Underworld, which is itself a realm rich in beings and beasts.

The Underworld comprises a society of souls, know as “mourners,” all of whom belong to one of three factions. Queen Gethsemoni is the regent and leader of the Flesh Faction; her “sister” Xiall is the chancellor of the Bone Faction, and the great oracle Ellianastis guides the Spirit Faction, alongside the First Sword of the Underworld, Kier. Each faction leader is supported by a clutch of loyal lieutenants and allies that provide additional color and contrast to their perspective of unity for the underworld truly means.

The factions – Bone, Flesh, and Spirit – are so cool, too. How do the factions differ from the Court?

The three factions are the philosophical underpinnings of the Court. They are the mind, the heart and the discord of the richly textured and occasionally dysfunctional Underworld. The factions provide a generalized cross-section of the various ways even we mortals appreciate our condition:

The Court of the Dead is a united assembly of this collage of thoughts, and it’s led by charismatic leaders who navigate a tricky – and occasionally treacherous – path between their own personal convictions and the understanding that they either all stand united, or perish divided.

How can people use the factions and characters of Court of the Dead to create their designs? What are you looking for in a design?

Every artist is unique in their skills and talents, but regardless of of that, we can all relate to the same themes through that personal lens. I didn’t want to restrict this challenge to just character art, or typographers, or those who just specialize in abstract objects and design elements.