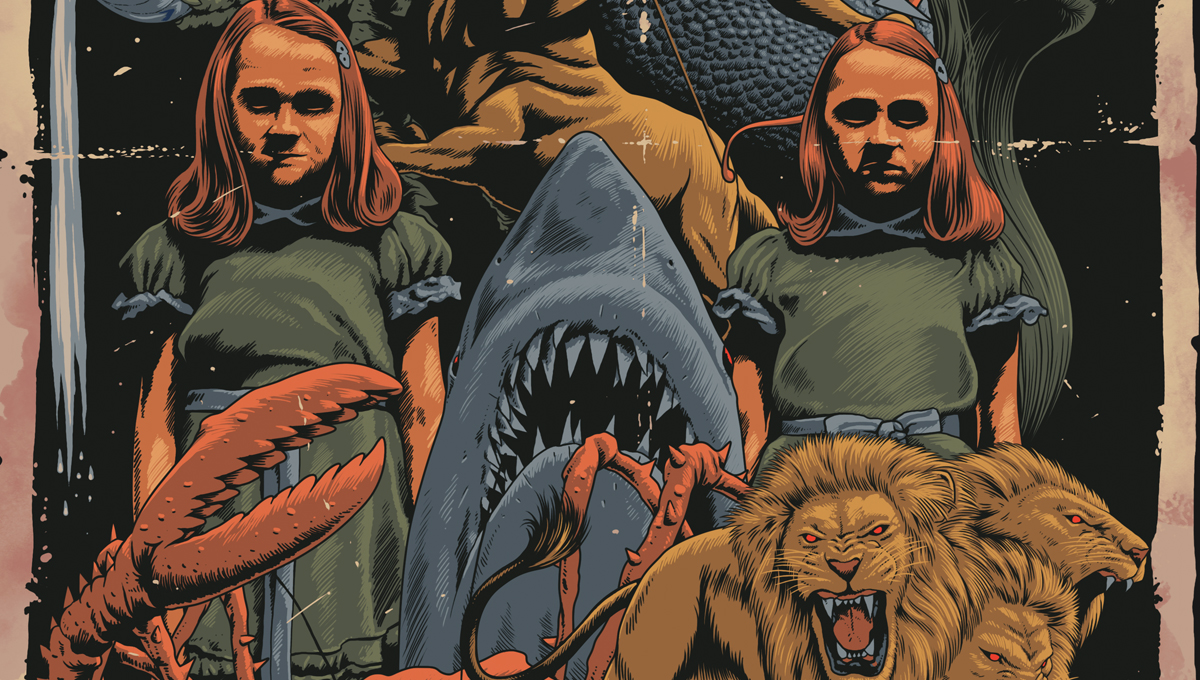 Oh, the horrorscope! Whether you’re a Leo or a Libra, every sign has a dark side. Geminis can be a liiittle two-faced. Aries? Stubborn as a ram. And when moody Mercury goes into retrograde (classic Mercury…), well, we ALL go a little bonkers. But the winners of our Horoscope challenge took the whole idea of ‘horoscopes gone bad’ to the next level. Collaborators Khairul Anam (@aanmyers) and Dina Prasetyawan  (@kooky_love) created a design that makes the faces of the zodiac into monsters that look straight out of a classic horror movie.

Hey bb, what’s your sign? Because you’re about to see it in a whole new way. We talked to these artists about what the plot of the hypothetical movie behind this design would be, about their other collabs, and of course, about their signs. Your daily horoscope says there’s an awesome read in your future: fulfill your destiny.

First things first, tell us a little bit about each of yourselves!

aanmyers: I was born and grew up in a remote village of East Java. I am learning self-taught digital illustration. I was severely affected by old school posters and vintage book cover illustrations. I also like movies, especially Christopher Nolan’s movie. My favorite genre is the thriller, though I also like the horror genre. My first favorite horror movie is Pengabdi Setan (1980).

kooky love: Maybe already many people know me through the Internet, but there is nothing wrong if I introduce myself again. I am Dina Prasetyawan better known as ‘kooky love’ – a self-taught shirt designer from Semarang, Indonesia. If I didn’t join Threadless in June 2005 there probably wouldn’t be kooky love like there is today. When I first joined threadless I had no children -now I have three. After my first triumph in Threadless 2006, my artworks are increasingly well-known in online t-shirts around the world. There may have been hundreds of printed t-shirt designs. I can just say, praise God.

What is each of your zodiac signs? Do you believe in the power of horoscopes?

AM: Capricorn; I don’t trust horoscopes. This very complex life can not only be based on a horoscope

KL: Virgo. I don’t believe in the horoscopes. It’s superstition.

This idea is awesome. How did you come up with it?

How did you split up the work for this piece? What was your collaborative process?

AM: Dina offers an idea and an initial sketch. I do sketches, line art, coloring to finishing. I am a horror movie lover; I gave some feedback about the horror movie characters that represent the zodiac characters.

KL: I am an idea supplier. I make a rough sketch. At the design development stage, we had a lot of exchanging thoughts about suitable movie characters to portray the zodiac signs.

If this was a movie, what would the plot be?

AM: In my imagination, the twins are children of a cursed family. They both have a passion to be children for the rest of their lives. To fulfill this desire, the two children hold a routine ritual each month by awakening the dark side of the zodiac characters. The ritual is held when the turn of the time period from one zodiac to the next zodiac. The evil figure that emerges from the dark side of this zodiac rises to eat everyone who has the same zodiac with its zodiac character. The more victims are eaten, the stronger the power of the twins.

But then there is someone who realizes a similar pattern of deaths from the victims. This person is a newcomer to a small town where this terror takes place. Luckily for him when he first arrived in the city, his zodiac time was in the long span of time after the last victim; in other words, he had a long time to uncover this terror.

The newcomer faces many hurdles to uncover the truth. Because when he first arrived in the city, the terror was also just going on. Many people are suspicious of this newcomer because since he came, Horrorscope terror has also begun to spread.

Formerly, these twins grew up in an orphanage. On a quiet night, the orphanage caregiver was startled by a baby crying in front of her orphanage. Once the door is opened, there is a basket containing twins. But the nanny doesn’t know who put the twins down. Since childhood, the twins have already brought bad influence to the orphanage. Gradually the orphanage closes because all of its inhabitants are going crazy, some missing, unless the twins are alive. Strangely, the police never tried to investigate the case in the orphanage, because the one who put the twins in the orphanage was the police chief in the town. The police chief realized there was something wrong with his twin sister. He must lose his wife who died while in the process of giving birth to the twins. Before the birth process, his wife often suffered from dark power every day. This is what makes it crazy.

KL: If this is a movie…the zodiacs are falling stars, fallen angels, that transformed into horror and mythological creatures. They are reunited in the story of a long thriller. The protagonist is a scientist who doesn’t believe in horoscopes. The antagonists are the characters of the horrorscope itself. The story can go back and forth, flashback. Ancient times to modern times. I ask back, will threadless produce the movie as well?

How did this beautiful collaboration come about? Have you two worked together before?

AM: Five days before the contest ended, Dina sent me a message and invited me to collaborate. He always offered me collaboration in the days leading up to the deadline. We have collaborated three times on Threadless: “King Kong”, “Soldier of Torture”, and “Horrorscope”.

KL: From the beginning, I saw the artwork of Khairul Anam in Threadless. I was immediately attracted. I see a great potential that belongs to him. I imagine if someday I have a good idea, I will offer him a collaboration. I believe he will execute my idea well. We’ve collaborated three times – just won on this third collaboration.

Give us an artistic horoscope prediction for today.

AM & KL: “Horrorscope” will be sold out since the first release and increasingly in demand ahead of Halloween.

Where do you each find artistic inspiration for your work?

AM: I find my artistic inspiration affected by old school posters and vintage book cover illustrations. I also like movies, especially Christopher Nolan’s movies. My favorite genre is the thriller, though I also like the horror genre.

KL: Everything can ignite my inspiration.

AM: Last day to submit when I was finishing the design, suddenly my home’s electricity went out. I was forced to carry my personal computer to the non-powered area to continue the design work. Don’t offer collaboration at a narrow time.