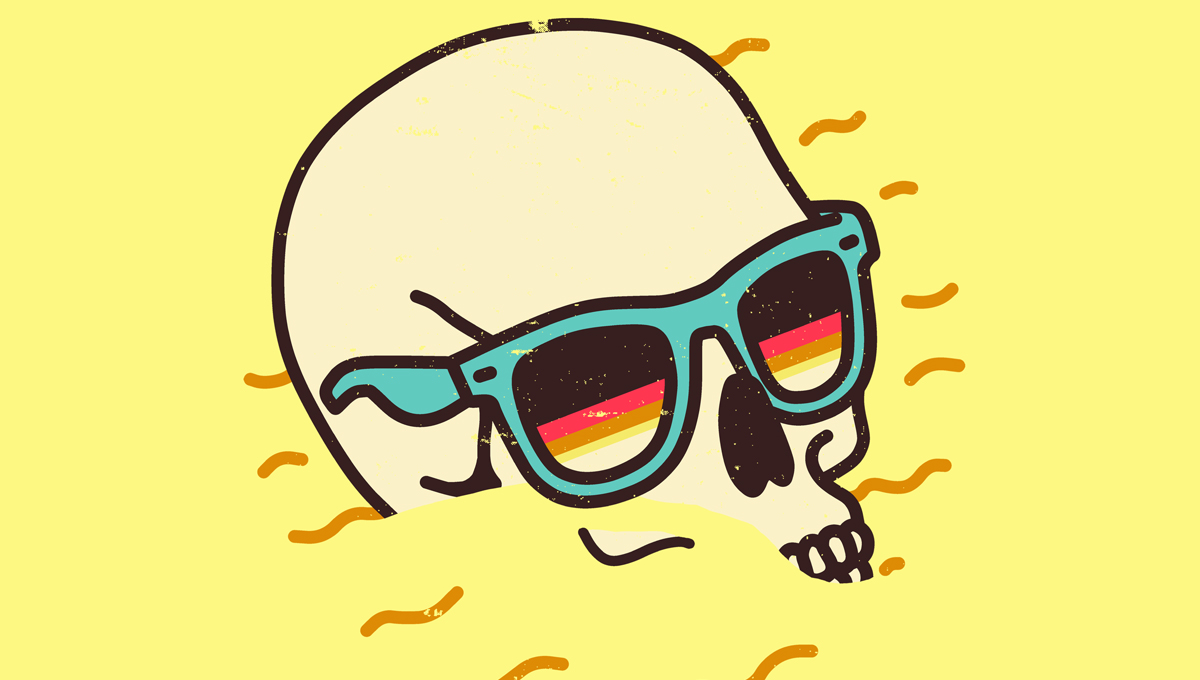 This time of year in Chicago, we’re all dreaming of sandy beaches under our feet while there’s snow under our boots. And the winner of our Cropped Challenge, Santiago Sarquis (@Metalsan), perfectly captured our “dead inside but still dreaming of the sun tho” feels with his design, “Beach Lover.” You may know Santiago from the amazing GIFs he makes of his designs. Or maybe you’ve seen his work on The Flash. We think he’s crushin’ it lately, and we think he’s even cooler after talking to him all about this design, his process, and about his own crazy beach story (for real, it’s nuts). Get to know him!

First things first, what have you been up to lately! Any new art techniques you’ve been trying out?

Lately, I’ve been doing some retro designs; I think it’s my natural style, but I try to do different things. One of the things I like the most about Threadless Challenges is that they give me the chance to make designs about subjects and techniques that I regularly wouldn’t do.

You just had a design featured on The Flash! If you could hang out with one fictional character (and give them a shirt, of course), who would it be?

Tyrion Lannister of Game of Thrones. He has an awesome sarcastic humour and if you’ve seen the show you know that the guy really knows how to throw a party! Yeah, definitely it would be very fun.

What do you prefer: a trip to the beach, a walk in the woods, or a day in the snow?

I like trees, rivers and explore, so I prefer a walk in the woods. I’m not a beach-lover, but I think a campfire at night on the beach is awesome. I haven’t had the chance to meet the snow, is it cool??

Being from Chicago, we think the snow is pretty cool, literally and figuratively. Tell us a little bit about this design! What’s the story behind this guy?

I have a friend who, when we go to the beach, is the first to enter the water and the last to go out. He is like, a real fan of the water or something like that, so we call him Flipper. This design is for all the beach addicts out there.

Do you have any crazy beach-related stories?

Yeah, when I was a child I once went to the beach with my family. My cousin and I took our boards and went swimming. We spent some time on the water when he suddenly began to feel aggressive movements on his board. After a while it stopped, we didn’t give it much thought because we were kids, so we kept playing for a bit more. When we got out of the water we realized that his board had some pretty serious bites.

Maybe a knife, a fishing rod, and a lighter. But honestly, I think it wouldn’t do much good. I’m not exactly a survivor… About the dessert island, I’d like it to be an island made of cheesecake. Instead of water, it’d be chocolate shake, and the palm trees could maybe be churros…I don’t know on which island I’d die first…

What’s been inspiring you lately?

Some crazy music always works for me, but it could be anything; the trailer of Spider-Man: Into The Spider-Verse, the Punisher kicking some butts, or Steven Rhodes pateando (kicking) some butts…

The year is about to come to an end, so I’d like to wish happy holidays and a great 2018 to all of you! Cheers!