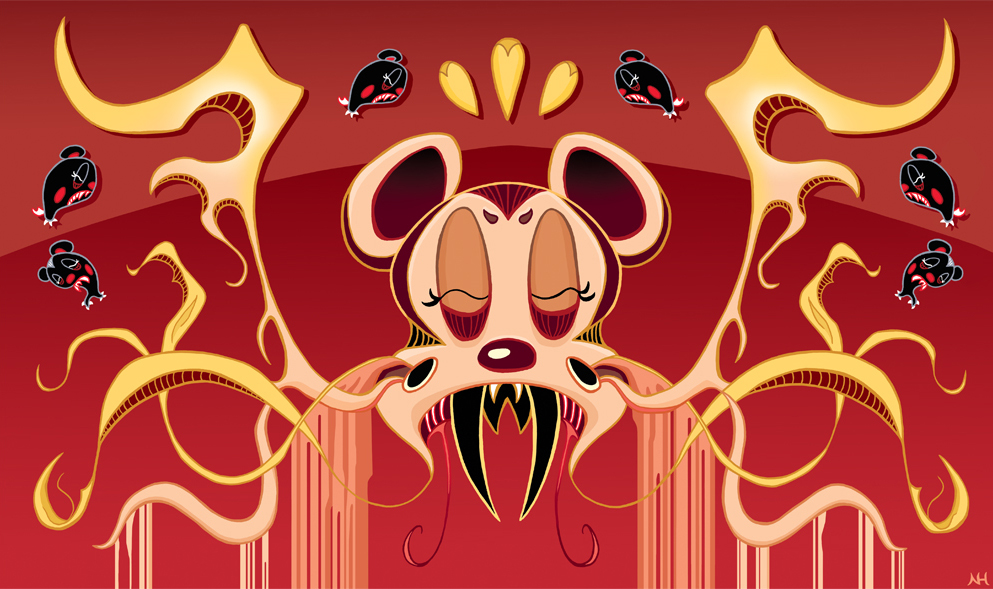 From a wide-eyed bear with pointy fangs to charmingly haunted beasts of all shapes and sizes, Nathan Hamill’s imaginative designs know no bounds. The Los Angeles-based artist, toy maker, and cartoonist creates creatures celebrated for their mischievous, expressive features. He works across a variety of mediums, designing, illustrating, and crafting worlds with strange and surprising inhabitants. We connected with Nathan after the launch of his new Artist Shop to learn more about his memorable childhood, creative inspiration, and more.

You grew up among some incredibly talented, artistic visionaries (your dad, Mark Hamill, being just one), how has your childhood and upbringing informed the art you make today?

“I was weaned on cartoons, comic books, and movies. Whether it was classic Disney cartoons, Carl Barks comics or being on the sets of the last two OT Star Wars movies, I was enveloped in pop culture of one kind or another before I was making memories. It definitely had an influence on me and everything from my early Star Wars and Ghostbusters drawings, which I still have a handful of, to the stuff I make today. It’s hard to know exactly how it influenced me, but I’m pretty sure it got the wheels turning.”

What are your earliest memories creating art, designs or toys, and what were some of your early mediums?

“I remember making a Ghostbusters book as a young kid with markers. I still have the pages, where I’d draw all the characters and even write out the dialogue from the movie. Actually, I’ve just added some of them to my website. Please excuse the grammar. I was just a kid. As far as toys go, I loved Star Wars, The Real Ghostbusters, M.A.S.K., G.I. Joe. You know…the staples of the 80s. Still have a handful of them. Even ended up with some Happy Meal toys on my shelf. Thankfully, I don’t have to track down those Muppet Babies figures on eBay.”

What were some of your favorite toys as a kid? What about now?

“I mentioned my favorite toys as a kid. As for now, I’ve slowed down on collecting as much as I did back in the day and throughout the early 2000s, when I worked at a toy store and spent a good portion of my paycheck on McFarlane Movie Maniacs and that kind of stuff. I stopped buying those larger figures though, due to a lack of space. That was one of the reasons I got into designer vinyl. I grabbed some Pete Fowler Monsterism blind boxes, partially because they were tiny and wouldn’t take up as much space as an 18” Leatherface figure.”

Who are some toy designers you admire? What types of fabrication or materials are you most interested in working with?

“I’d been a fan of Frank Kozik since his poster days in the 90s, so his early Kid Robot vinyls grabbed my eye. That was the gateway drug into the art toy world for me. Other artists I love and collect are Touma, Joe Ledbetter, Scott Tolleson, Brian Flynn, and Tara McPherson.

I’ve released pieces made of vinyl, resin, and metal. Wouldn’t mind exploring wood at some point. But vinyl is my favorite. Most recently I’ve been releasing sofubi pieces with Science Patrol and have been really happy with those. Super high quality, and we get to make more colorways than I did with the bigger vinyl runs from the factories. We do smaller numbers, so there’s a bit more freedom that allows us more variety.”

Your comics are charming and hilarious. How do you come up with dialogue and storylines for your dumb dinos?

“That’s a collaboration with Eric Filipkowski, who I co-created an animated show called Weasel Town a few years back. We share the same sense of stupid “smart” humor, so it’s a good fit. He writes it, I draws it. Sometimes it’ll be inspired by a current event or timely pop culture reference but mostly it’s whatever’s knocking around in Eric’s head. Only he knows what’s going on in there. You’d have to ask him.”

The Star Wars Universe obviously holds incredible sway over our collective imagination, but what are some unique ways you feel Star Wars has influenced the worlds you create?

“I’d hope it’s in the little weird details. I always loved the creatures in that universe. The odder, the better.”

You’ve created some adorably dark, strange, and memorable creatures. Do you have a favorite?

“Someone referred to my art as cute macabre, which I’ll use in perpetuity. My favorite is usually the latest, as it’s still the freshest and the one I’m most excited about; but if I had to choose one, it’d be Lavabear. There are several design elements incorporated into that one, some conscious, some I didn’t realize until later. I feel like it’s the best representation of what’s inspired me up to this point.”

Your creatures seem so full of life and energy. Does narrative or storytelling play a role in your art, and if so, how?

“Yes and no. I have a backstory for them but I like the characters to stand on their own. There’s a story if you’re interested, but I like the image to speak for itself.”

In your bio you write “he plays well with others.” What’s your philosophy on creative collaboration and what do you look for in artistic partnerships?

“That just means I’m no longer being put on time out or sent to the principal’s office for acting up.”

How do you balance what inspires your art with what you feel drawn to create? What do you do to refresh your artistic passion when you’re not feeling inspired?

“Half of the time, I’ll set out to create something with an idea before I start. But the most fun is not knowing where you’re going or where you’ll end up with a drawing or design. I’ll end up with something I would have never created if I had a goal in mind when I started.”

“Keep at it. And make what you love. I think if one’s persistent, hopefully you’ll find an audience.”

If you could live in one movie from the 80s or 90s, which would you choose?

“Ghostbusters. Whether I was on the team or calling them.”