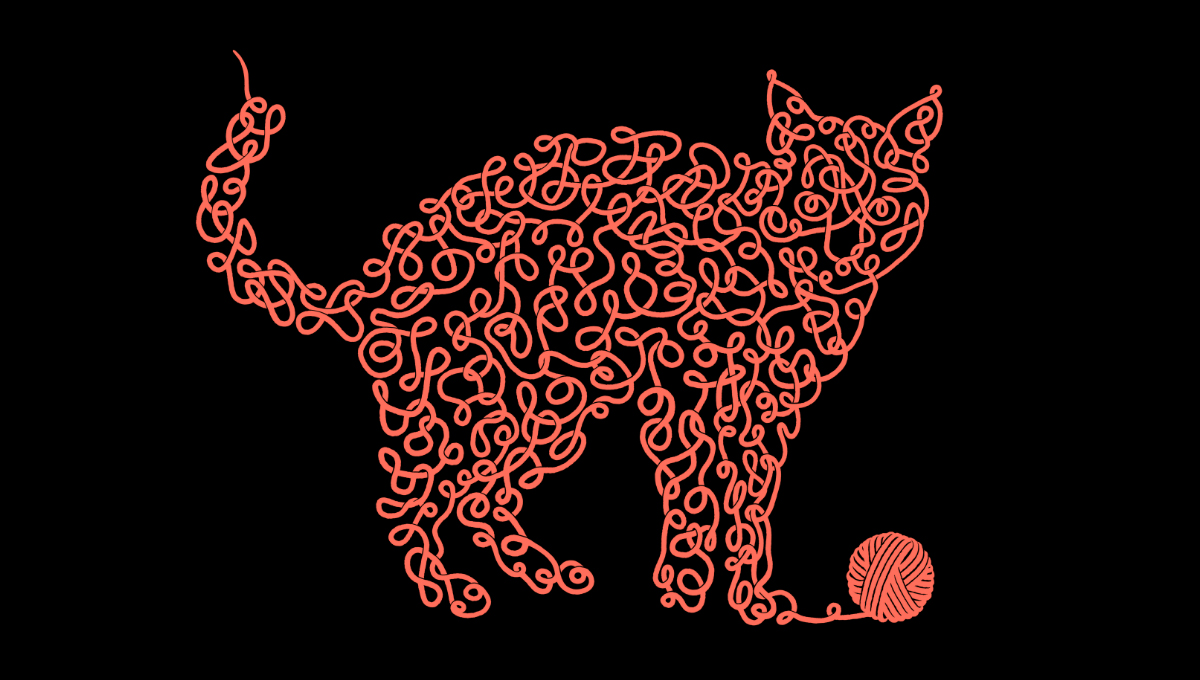 For our One Line Challenge, there was only one rule…can you guess it? We challenged artists to create a drawing using just one continuous line. Anyone who’s ever used an Etch A Sketch before knows that this is no easy feat. But the winner of our One Line Challenge made it look easy. Freelance creative director Victor Calahan’s (@v_calahan) winning design “Intricat” is intricately designed art (and wordplay) at its finest. We talked to Victor about how long this “curiosity knit the cat” creation took, whether he’s ever tried drawing with just one line before, and all about which came first: the cat or the yarn?

Let’s start at the start! Tell us a little bit about yourself! Where are you from? Do you do art for a living?

Well hello there. To make it short, I grew up places and have been living in Paris where I’ve been working as a freelance creative director for some time now, mostly making movie posters and all the stuff that goes around. Shirt design and illustration are a side gig, a fun experimental playground. I do wish I could make a living out of it, but that would likely require more time, regularity (I can drop my pen for months), talent, networking & being proactive on social media (and I tend to be quite the bum when it comes to that…).

You have a few different Threadless prints that all have slightly different styles! How do you define your style?

As much as I’d love to have one after all these years making stuff, I don’t think I’m there yet… Usually, I’ll have an idea, picture it with a certain style, and, if I think I’m skilled enough to achieve it, it flows from there. I think it’s an occupational hazard from being a creative director? Yet, I love the way some Threadlessers have acquired awesome, distinctive styles through time and practice; I think it helps. Hopefully, I’ll be there someday, somehow.

Have you ever tried doing art pieces with just one line before? If not, was it hard to learn?

Nope; the concept for “Intricat” in itself, like a post-it doodling, made it quite simple to achieve. Which is nice, ‘cause I’ll sometimes spend days on something and then go, “meh…this is crap” and dump it.

What inspired the design?

I was thinking about all things linear and thought of unrolling a wool ball. The wool ball led me to the cat and then all the pieces fell into place, name included. But now that I think of it, my “Ornamental Tiger” design also must have been there, hanging somewhere in the back of my head.

What was the process of creating “Intricat”? How did you plan out doing the piece with just one line?

I started by looking at cat silhouettes and made fast sketches, picked the one that seemed the best and then doodled my way from the tail to the wool ball in one go on the computer. Then I made some tweaks – mostly to the head to make it more obvious without losing the gist of it – and finished with the over and under interlacing and the ball.

How long did it take?

From start to finish I’d say it was wrapped in a little less than two days since the idea was quite simple to execute.

Tell us a little bit about the designs in your Artist Shop! If there’s one design in there that best describes you or your style, which is it?

Going back to the question of style there, I can’t say there is a design that describes me best; maybe more of a vintage feel with a touch of irony? I have some favs though, like “Blood Diamonds“, “A Tragedy of Obsolescence” or “F…cked Up Celebrity“, which are more mixed media designs and more political I guess…or the GOT series ’cause they sweet. ;^)

Speaking of Game of Thrones… favorite character and quote?

The Hound for the win! With this deeply philosophical quote: “Fuck the Water; bring me Wine!” (check the shop, also works fine with Ale…)

The logo in your Artist Shop is a super cool TV – would you say that TV shows and films have a big influence on your work?

Not that much, but if I think of something and it happens to be TV- or movie-related, it’s fine. Like the GOT series; that was real fun to do. But pop culture designs aren’t a focus at all. I just happen to like vintage TVs and static!

Sure, to threadless & all those who supported this design, so long, and thanks for all the fish!