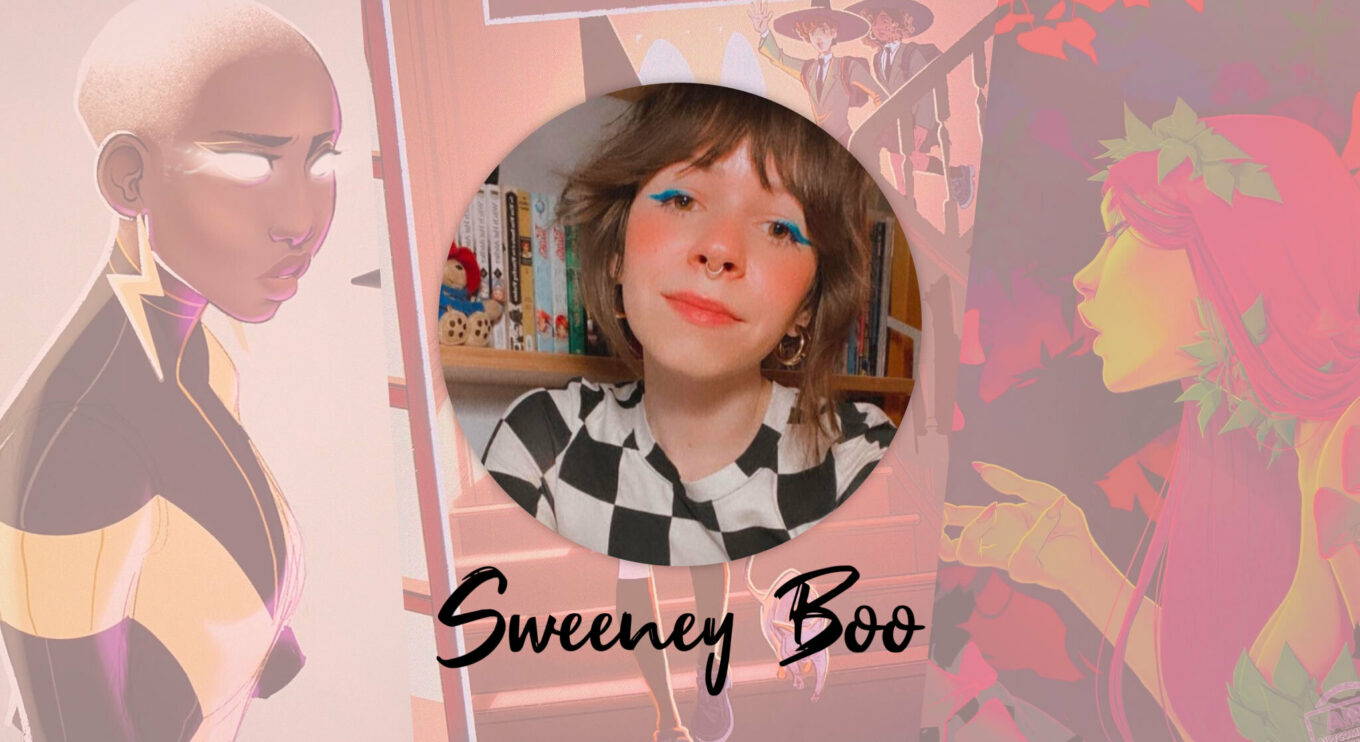 Whether or not they can fly, shoot lasers out of their eyes, or lick their own elbow, a superhero’s most impressive ability is showing bravery in the face of uncertainty. What’s more brave than taking a leap of faith? That’s what Sweeney Boo did when she left her home in France to pursue a career as a comic book artist in Montreal, Canada.

Despite the difficulties of being far away from home, she remained focused on achieving her dream. She worked at a mobile gaming company by day and drew comics by night until opportunities arose. Within a few years, she found herself illustrating Captain Marvel and other beloved characters for some of the most storied comic book publishers. You know, the big ones.

As she became more established in the comic book world and earned opportunities to publish her own original work, she prepared for her next courageous feat—sharing a deeply personal story inspired by her real-life struggles. She wrote and illustrated 2020’s Eat, and Love Yourself as a way of telling others with similar life experiences that they aren’t alone.

Right around the release of her latest graphic novel, Over My Dead Body, we caught up with Sweeney Boo to discuss her journey as a comic book artist, her Threadless Artist Shop, and many other topics.

Your shop mentions that you grew up in the southwest of France where you studied graphic design and listened to really loud rock music. What role, if any, does music play in your creative process? Who are some of the recording artists that help you get in the zone?

Sweeney Boo: I love listening to music to boost up my energy, or get into a calmer state if needed. Usually, it is mostly to create a better sense of focus when I work. I listen to quite a bunch of different artists, but I’d say that ABBA, Paramore, Snail Mail, Talking Heads, and Fleetwood Mac are the ones that come back on more often than not!

In 2015, you left France for Montreal, Canada in pursuit of a career as a comic book artist. What was this transition like for you and what were some of the challenges you had to overcome?

SB: It was the most scary experience, but at the same time it felt like a smooth transition. But the shock of moving to a new country, and one that is so far away from home, came back to hit me a year or so later; emotionally at least. But I would do it all over again. Overall, the fact that I moved to a town where French was the language made things much easier, but I still had to acclimate to a new culture and lifestyle, and try making friends! And god knows that making friends as an adult is hard!

Your vision of becoming a comic book artist came into focus a year later when you created a cover and short story for the fantasy series Rat Queens, published by Image Comics. At what moment did it feel like your dream was becoming a reality?

SB: -Pinches myself- I honestly still cannot accept it as a reality. When things “start,” every email, offer, or collaboration feels like “is this it?!” It can take a long time to lose that habit, even when you’ve actually made it. For me, it shifted into the “maybe it could all end tomorrow” type of reality, but it makes me enjoy each project I get even more.

Since you made your official debut in the comic world, you’ve done work for various publishers including Marvel, DC Comics, and Archie Comics. As a long-time fan of comic books, which franchises were you most excited to work on?

SB: Oh my gosh, it’s hard to choose a favorite one really. I was giddy and excited about each one, and I still am. But there’s nothing like getting to draw your first famous character. Getting to draw Captain Marvel as my very first comic series was just the most amazing experience.

Your Joe Shuster Award–nominated first graphic novel, Eat, and Love Yourself, follows a young woman on a quest to find self-worth while grappling with eating disorders and depression. Why was it important for you to tell this story and what can readers learn from a character like Mindy?

SB: Eat, and Love Yourself is an incredibly personal story. It kinda came together with a cathartic idea at first. It was something I had to spill out. But mostly because, at the most vulnerable stage of my eating disorder, I remember feeling very lonely. And what made me happy was to read comic books and graphic novels. But nothing came close to comforting me in the sense of “I understand what you are going through”. All the books I could find on my disorder were very clinical, if that makes sense? So I had hoped when creating the book that maybe I could give this sense of comfort to someone else that needed it.

If you could give your cat, Loki, any superpower, what would it be and why?

SB: To speak! She has so much to tell me all the time, and I wish I could understand her. I bet she’s quite sassy.

In 2017, you worked on costume designs for the TV show Marvel Rising. Where did your love for fashion begin?

SB: I’ve always been in love with fashion! I actually wanted to become a fashion designer for the longest time when I was a kid. I’m really shy and introverted, so clothing was always a way for me to “be loud,” to be confident without having to speak. That’s why it’s always the main focus of any character I draw.

Witches are a persistent theme throughout your Artist Shop, and you describe yourself as an introverted witch. What drew you to the this lifestyle and aesthetic?

SB: I think we all wanted to be a witch, or have some sort of magical power, when we were kids. It sounds so cool, and different, and kinda punk rock. Some of us grow out of it, but I didn’t! Witches have such an interesting story. The imagery is so rich and different in every culture. And still today, the black pointy hat is cool and mysterious. They’re simply fascinating.

Congrats on the release of your latest graphic novel, Over My Dead Body! The story follows Abby, a student at a secret school of witchcraft who is determined to solve the mystery behind the disappearance of a close friend. In what ways do the characters and setting of this story reflect the modern world we live in?

SB: Thank you so much, it’s so exciting! I think that we can usually see a reflection of our world in any story we consume. The emotional aspect of a character, their friendships, relationships, struggles, trauma, anxieties, are things we all go through. I think Abby’s story can be relatable to many people, but maybe without the ghosts and haunted forest!

You’re appearing at multiple fan conventions coming up, including Rose City Comic Con (September 9–11) and New York Comic Con (October 6–9). What do you look forward to the most when you’re getting ready to exhibit at a convention?

SB: Since we’ve all been coming back to cons this year, I think we all missed interacting with fans the most! There is nothing like geeking out with people about nerdy stuff and getting to see other creators!

In a previous interview with Art Side of Life, you talk about experiencing burnout when you were juggling your day job and drawing comics at night. What are some activities that make you feel rejuvenated?

SB: Sleep, sleep, sleep. Lots of naps. When I burned out, it was because I was incapable of listening to my needs. All that mattered were the things I “had” to do. So, sleep was definitely not a priority. And there is nothing like a healthy sleep schedule. It’s my favorite part of the day and it always puts me back to 100% (mostly).

What can fans of your art look forward to in the near future? If you’re able to share, do you have any other projects or releases we should look out for?

SB: A lot more fashion. I’m working on some amazing projects right now that I can’t talk about unfortunately. But all I can say is that each of them is challenging me in the best way and giving me lots of opportunities to explore and have fun with great aesthetics!

Thanks to Sweeney Boo for taking the time for this conversation! Visit her Artist Shop, follow her on Instagram, and check her calendar for upcoming convention appearances.