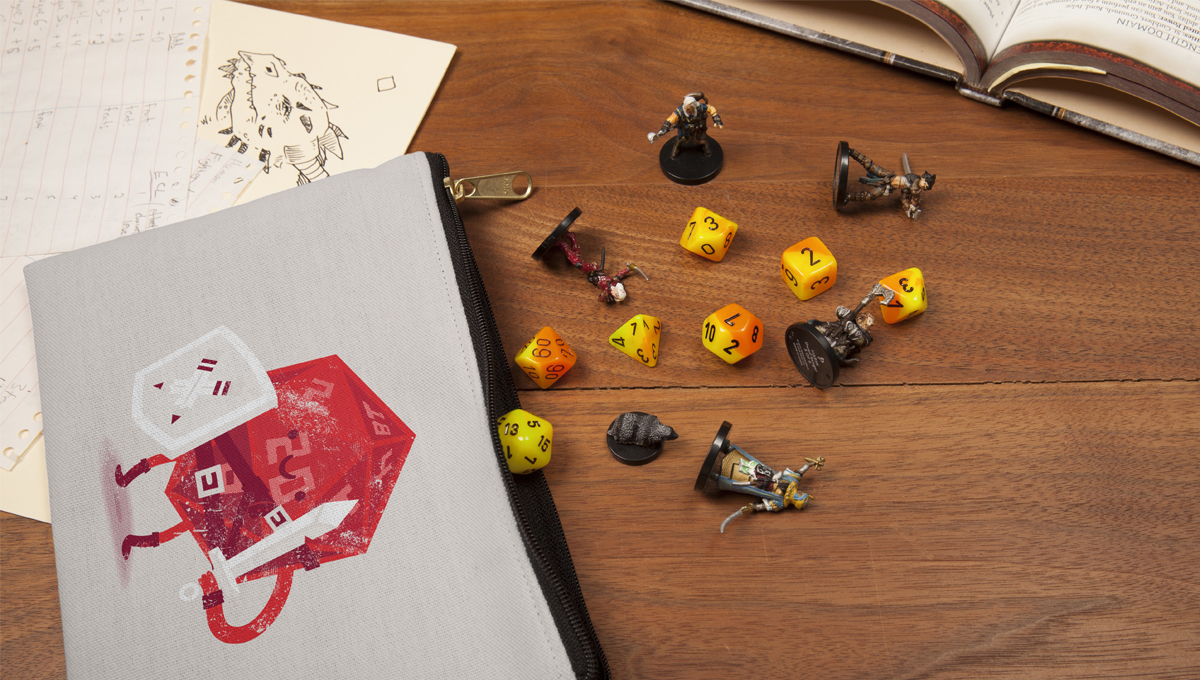 Usually, when Threadless teams up with another company it’s for an extra awesome design challenge or a special Artist Shop. But we recently teamed up with the makers of our most favorite notebooks ever, Field Notes, for a whole ‘nother reason: to go questing.

Welcome to the Threadless and Field Notes Dungeons and Dragons game!

When we found out that the Field Notes office was a short walk from our own, we had no idea that what started as an awesome neighbor would turn into a full-blown gaming group!

This beautiful partnership started when one of our own – Wally IRL, Barnaby the (like, SUPER cursed) Bard in the game – took a trip to Field Notes. He mentioned a Dungeons and Dragons game he was already playing to the person who would later become our resident wizard. Business cards were exchanged, one thing led to another, and now every two weeks we switch off between our two offices to host our escape to the fantasy seaside town of Portharbor and to roll a bunch of 20-sided dice (D20s) for our decisions (hence that title, “roll for initiative”).

If you know the name Dungeons and Dragons but aren’t super familiar with the game, it’s kind of like a video game IRL meets nerdy improv. Everyone builds their own character and goes on a fantasy adventure that one person, the Dungeon Master (DM), creates. And our DM, Aaron? He’s awesome and insanely good at painting the picture of a super realistic world.

Usually, Dungeons and Dragons groups are relatively small…but our group is anything but. We have a Human Wizard (who doesn’t believe in magic), Barbarian Goliath, Dwarf Warrior (who has no clue he’s a dwarf), Elf Monk, Triton Paladin (with the best name: Narwhalius), Gnome Paladin, Dragonborn Druid (that’s me!), half Tabaxi half Kitsune Rogue Arcane Trickster, Aasimar Bard (again, super cursed and has a Batman voice), Dwarf Cleric, Gnome Druid. Phew.

We all have a super fun time playing this game; we even record it sometimes! And from characters like “Always Around Jackson” who inhabit the world, to the bar strip of this fictional city being modeled after Chicago’s Logan Square (re-named Logan’s Hollow), Aaron has set up one hell of a world for us all to hang out in.

The creatives who are nerdy together stay together. And considering that we’re about six games into our adventure, I’d say that us nerds are definitely sticking together.

Featured image is of “Let’s Go on an Adventure!” by Philip Tseng on a zip pouch.