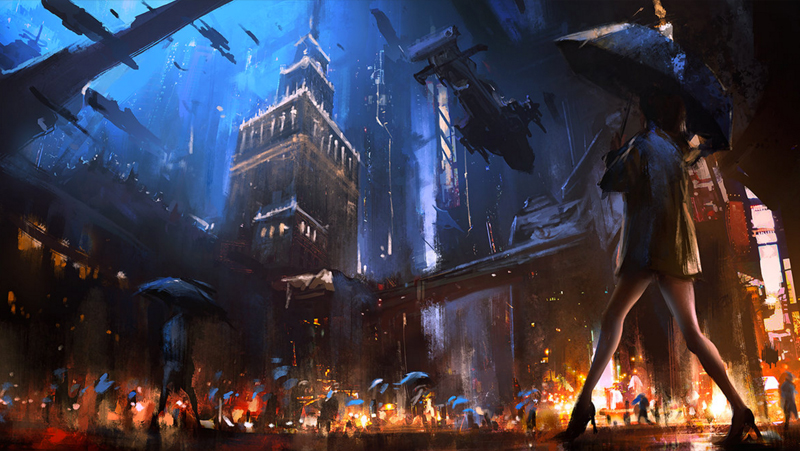 We’re a little obsessed with sci-fi worlds here (exhibit A…and exhibit B). So I’m in good company when I say – I freakin’ love futuristic art.

As a hardcore lady-nerd, I get excited about any new sci-fi thing. But one thing I can’t get enough of is seeing different cities in sci-fi films and art.

Whether it’s a city with tiny futuristic details like in Children of Men and Her, a shiny new city above a smog-cloaked 20th century city in The Fifth Element, or the stunningly cyberpunk urban sprawl of Blade Runner (which I actually like more than the movie itself), I never get sick of seeing steel jungles reimagined.

So when I stumbled across Darek Zabrocki’s Deviantart chock-full of futuristic speed-painted cityscapes? I did a mental “aslkdgjsd!!”

What I love about Zabrocki’s work (a.k.a daRoz on Deviant Art) is that his speed paintings have the look of charming oil paintings that are made of Parisian Streets, Venice’s waterways, London streets at night, etc…just with a little grit and cyberpunkness thrown in.

And what’s more, he doesn’t always make up new, concept cityscapes (as awesome as that is). The image above is called “Futuristic Warsaw.” And below? Paris in a Blade Runner-inspired reality.

And yet, somehow his cityscapes still maintain the look of believable cities with a very real feel about them. Sure, there are flying cars – but somehow they’re flying cars you can look at and go, “no yeah, I buy that, that could be a real place.” They almost look like photographs taken with a lens that got water on it.

Even his non-futuristic speed-paintings look like they’re set in the year 2525, or like a cyberpunk version of Leonid Afremov’s beautiful city paintings.

And here are a few from around the world:

Check out his amazing work and get lost in it.

And if you’re still not sold, then P.S – his Assassin’s Creed and Star Wars art is also to die for. Y’know, if amazing fanart is your thing.