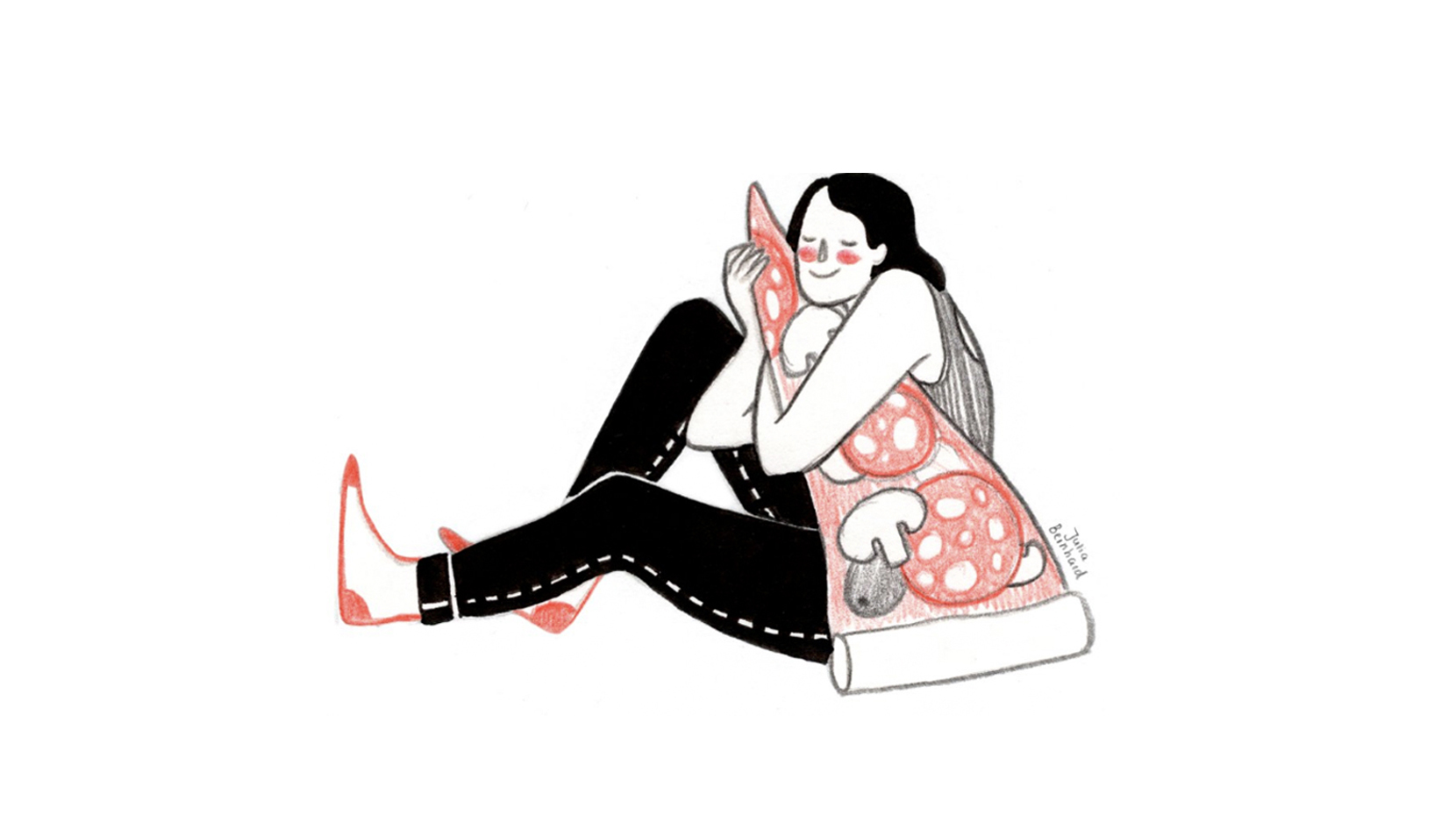 Wearer of mismatched socks, dog mom, accidental plant-killer. That’s the gist of illustrator and cartoonist Julia Bernhard as summarized in her Artist Shop’s ‘About’ page. And frankly, she sounds like our kind of human. This Germany-based artist for The Nib became an artist, she claims, “out of spite because someone once said my humans looked like deranged pumpkins.” While journal entries are usually kept close to the chest, Julia’s amazing “illustrated journal” entries and life observations having skyrocketed in popularity over the course of a year, and we definitely think she proved the haters with the pumpkin comments wrong. We talked to Julia about her claim to Instagram fame, how her art is therapeutic for both her and readers, and about pizza. We loved Julia’s work before, but after interviewing her? We’re a little obsessed. Discover more of her work!

First things first, tell us a little bit about yourself! Are you originally from Germany? Do you illustrate full-time? What’s your favorite kind of pizza?

My name is Julia and I was born and raised in a rather small town in the middle of Germany. I am currently working on my master’s degree in illustration, so I am studying full-time while working as much as possible in my free time. I plan to make illustration my full-time job once I have graduated. 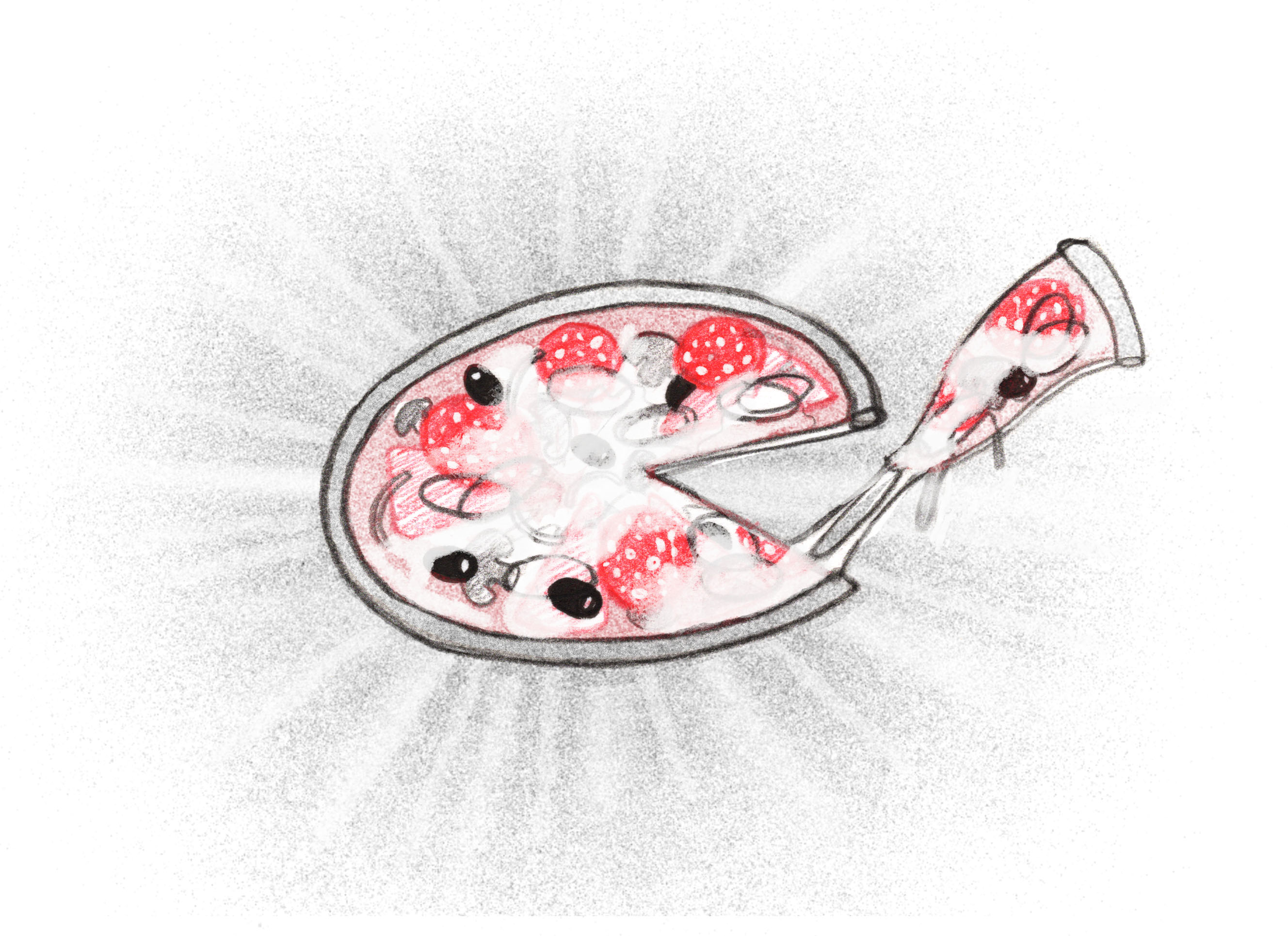 My favorite kind of pizza is the one my mom makes. And I don’t just say that because she’s my mother and she would slap me with a brick if I didn’t (she wouldn’t, actually…I guess). Her dough is really thin and has an amazingly crispy crust. It tastes just like the one in Italy. Her pizza comes only with two types of toppings: either tuna, onions and mozzarella or salami, fresh champignons, ham, onions, olives, and mozzarella. Everything else is considered a sacrilege and therefore is fiercely condemned. Especially putting cheese other than mozzarella on a pizza. If you want my mother to despise you for all eternity, just go ahead and ask her to put some emmental on it. 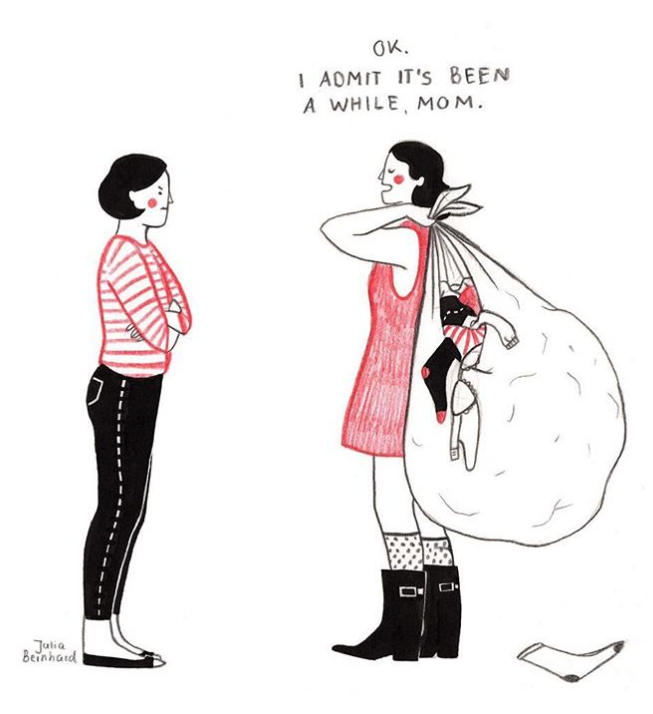 What made you start your illustrated journal drawings?

When I graduated with a bachelor’s degree two years ago, I realized I could still improve my skills when it came to drawing humans and facial expressions. It dawned on me that if I wanted to become an illustrator I couldn’t keep on avoiding drawing humans forever, so I better get out of my comfort zone (aka landscapes, haunted trees, and wiener dogs) and practice. So I sat myself down and started drawing people every single day; no exceptions allowed. To keep me motivated, I let them have little conversations with each other and before I knew it, I was drawing comics about conversations I had with friends or had overheard somewhere or just general observations about life, humans, and other weird stuff that popped into my mind.

By now. my family and friends have started to get really cautious around me because they’re scared I will turn something they say into a cartoon. But not all of my cartoons are autobiographical, so they’re safe most of the time. Unfortunately for them, my family is very funny in an extremely mean and misanthropic way, so they are the best involuntary gag writers I could wish for.

You gained a huge following pretty fast! When did you realize you had tapped into something big with your illustrated comics?

It’s insane, isn’t it?! It all started when Picame reposted one of my early comics and from then on, the number of followers started growing at an absurd speed. I am not entirely sure I have realized what has happened yet. And I intend to keep it this way. Fortunately, I have no head for figures (my math teacher can verify that. I almost had that poor woman in tears at least twice a week), so 50k is a number far too big for me to wrap my head around. It feels kind of crazy though that so many people would care enough to follow my account. It makes me all warm and fuzzy inside just thinking about it. In the beginning, I told my friends I would buy a round for every 1.000 people that followed me. By now, I am about 43 rounds behind and they would probably die from alcohol poisoning if I delivered my promise all in one night. Maybe I will make them a cake instead.

I first started to realize that this wasn’t just some random internet thing I stumbled into when I got offered actual jobs that paid actual money for drawing comics. That felt pretty awesome, to say the least. There is nothing better than getting paid for doing what you love most.

A lot of your comics express the fears/thoughts many of us have and can relate to. Are they therapeutic for you?

I guess they are a little like therapy for me. In my early twenties, I had pretty impressive depression and found it very hard to communicate my feelings (or complete lack thereof) to the people I loved. I feared that if I admitted to what I was going through my mental illness would suddenly become the singular thing that defined me as a person in the eyes of others, and that scared me a lot. Humor became a pretty good vehicle for me to express my feelings and gain back some control over my life. By making cynical jokes about it, I was finally able to address the things that scared me. In the long run, it really helped me break the vicious circle of feeling the need to force myself to pretend I was doing fine while isolating myself even more by doing so.

When I started drawing comics I never planned for anxiety or depression to become a recurring theme. But then again, my cartoons reflect the way I see the world and these things had been a big part of my life and on some days still are. So naturally, these topics just pop up once in a while. I get a lot of messages from people telling me that they have experienced similar things and that my cartoons helped them through tough times because they made them feel less alone. Whenever I get a message like this, it makes me so damn happy. As a society, we, unfortunately, tend to no longer have open and honest conversations about the way we feel. So we automatically assume that everybody around us is doing just great. Which 90% of the time isn’t true. If I can contribute even a tiny bit to making it more normal to talk about mental illness or generally the fact that people have a pretty wide range of emotions because they are not Teflon-coated frying pans but actual human beings, then I have reached everything I wanted.

Tell us a little bit about your Artist Shop! Have you sold your work on apparel and accessories before?

I always thought that it would be pretty cool to have my comics printed on bags and shirts, but I had so much to do for university that printing and shipping would have been too much of a hassle. Threadless was the perfect solution because I can upload my drawings and they take care of the rest. Plus, the quality of the products is just amazing, so I am thrilled that this opportunity exists. I usually upload drawings from my Instagram page that I think could work well on shirts. But sometimes people message me requesting certain comics they would like to have as prints or feel like they could be a good gift for somebody they know and then I upload them into my online shop as well.

I love how your work mixes materials – what are your go-to art materials when creating comics?

I am pretty basic when it comes to art supply. I still stick to the same old Faber Castell Grip colored pencils I used in high school (I own three different shades of red and some black ones) and usually combine them with black ink pens (also by Faber Castell). Right now I am thinking about getting myself an iPad because I want to get more into digital drawing and I am like a big child when it comes to technical stuff.

What artists are you most inspired by?

I think the artist that has had the biggest impact on me throughout my entire life is Tomi Ungerer. I adore his humor. No Kiss for Mother was one of my favorite books when I was a kid and it still is. I love that he has such a wide range of humor. He can be goofy but also sarcastic and vulgar and terribly politically incorrect. I also love Loriot. His opera guide is the best thing ever. My latest discovery is Will MacPhail who draws cartoons for the New Yorker. He almost made me pee my pants while laughing several times and by now I have become a little scared of visiting his Instagram page.

Bonus question: tell us about Señor Puck, because he sounds like the best assistant!

Señor Puck is a 10-year-old stray that we adopted last spring after he had been rescued from a Spanish kill shelter. When I started working freelance from home I found that I started talking to myself or the toaster for lack of better options. I thought I would appear a little less insane if I had a dog I could talk at, so I started looking for dogs on the internet (that just sounded a bit like our dog was a mail-order bride, but you know what I mean). When I saw Puck’s little face, I immediately fell in love with him. He looks like a crossbreed between Doberman, Chihuahua and a deranged squirrel. His head is way too small for his body and when we adopted him he had only one snaggletooth left that made him look like a tiny and possibly rabid boar. But to me, he is the most beautiful and elegant creature that ever roamed the earth and I love him. I am also the only person that is allowed to make fun of him. Some guy on the street once made a really tasteless joke about his tooth and my friend had to keep me from getting into a fistfight with him. Puck is a great assistant because he is very quiet around the office (he practically sleeps all day), doesn’t judge me for talking to myself or using foul language, tolerates my taste in music (I listen to classical music and opera a lot) and only farts occasionally. Also, he is clingy and needy and wants to be held all the time and I want to pet him all the time so we are basically in a very toxic co-dependent relationship and enjoying every second of it.