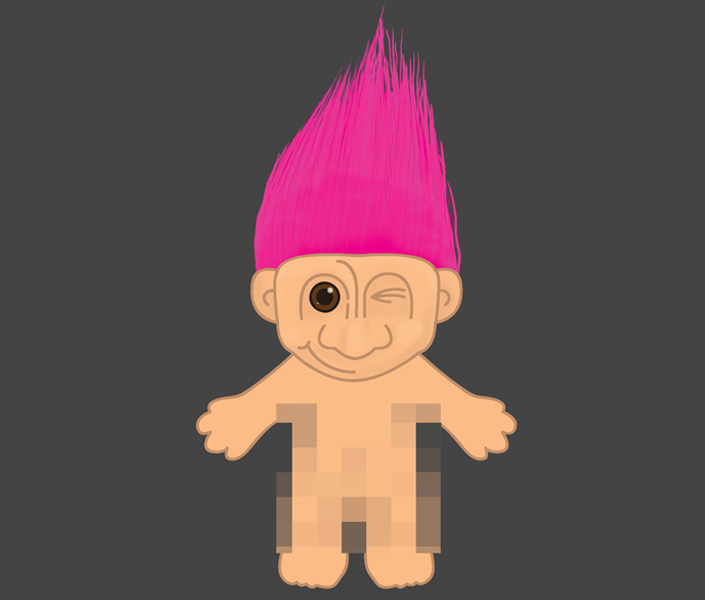 We’re not trollin’ you when we say: they’re baaaaaack.

You didn’t have to actually grow up with Troll dolls to be aware of their existence. These creatures have been around since ’59, and just like the Furby, are creepin’ back into our lives. Trolls are even getting their own movie called, well, Trolls.

The Trolls movie doesn’t hit theaters until November, but we were feelin’ inspired by their (actually adorable) redesign and wanted to see some designs of your own! So in honor of our Troll collection, we asked our artists what their favorite toy was as a kid and had them sketch their own troll.

Check out their answers below! And have a troll story? Leave it in the comments! Just don’t be trollin’…

My favorite toy as a kid was a mini motorcycle toy, I don’t know why I just love them. I couldn’t even ride a bike when I was a kid, I didn’t watch motoraces or anything like that. But I love that amazing tiny motorbike.

I have this pale of different types of dinosaurs and my favorite was the black and red colored T-rex. I love that toy because it was massive and the details of the scales are awesome and we actually had a couple of fights with my brother coz he wanted to have it. I loved dinosaurs when I was a kid and up until now I’m still amazed at how beautiful those creatures were.

Thank you and more power threadless!

I can’t recall having a favourite toy. However, I loved any toys that were related to Thunderbirds. My Stepdad even built & painted a fully functional Tracy Island for me!

I spent most of my childhood playing with my teddy bears. I probably had around 20 of them, each with its own name and personality. I don’t think I had a favourite one though. I loved them all the same, like a big furry family.

When I was a kid, I loved playing with Hot Wheels cars. They were my favorite toy until now.