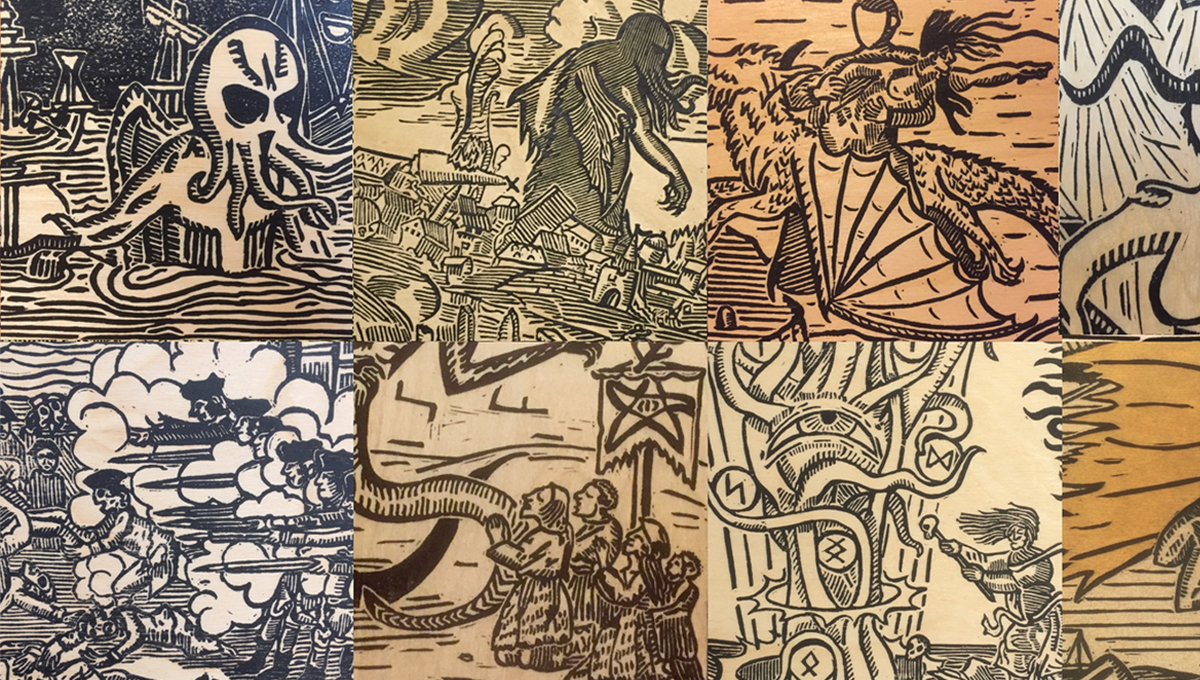 What do H.P Lovecraft, witches, aliens, and ghosts all have in common (besides being awesome and often showing up all at once)? They all converge in Salem, Massachusetts. Salem is like a portal that leads straight to strange and mysterious happenings, and they all find a welcome home in librarian & artist Drew Meger’s ‘Corey Press’ studio.

Named for the Giles Corey put to death for supposed witchcraft in 1692, Meger’s Corey Press Studio resurrects medieval imagery, combines it with his own style, and turns it into inked and “hand carved madness” on wooden blocks, yielding stunning results. His art explores everything from Lovecraft to witchcraft to all other things that might lurk in the cracks of reality and darks in between spaces that we don’t dare enter, save in our nightmares.

We talked to Meger about the ghostly meaning behind his studio’s name – The Corey Press, the process of creating one of his masterpieces, and he shares a ghost story of his own. Check it out!

First things first; tell us a little bit about yourself and your work! Did you grow up in Salem?

My name is Drew Meger and I’m a dual classed librarian/artist operating in Salem, MA. My work focuses on the weird and occult; medieval alien abductions, strange illuminated conspiracies, and Lovecraftian horrors from beyond space and time – all manifested in hand carved and inked blockprints that I hand press to wood around the corner from where Giles Corey (check your high school copy of The Crucible) met his end under a pile of stones. That’s where my shop name comes from. It was either this or open a panini sandwich shop.

I’m not originally from Salem. I grew up in Maryland in a town called Crofton (best known for the snakehead fish and Edward Snowden), but this city drew me in. Where else can you live and expect to walk by witches, vampires, and even a Frankenstein’s Monster or two all on the way to the drug store?

I’ve gotta ask…have you ever seen the ghost of Giles Corey?

Me? No. But when my son was four he came into our bedroom one night and woke us up. He said the ghost in his room wanted to tell him a secret, but he didn’t want to listen. The ghost’s mouth was full of bugs, and if he listened one of the bugs would get into his ear and he’d become a ghost too. Our house is over 150 years old, so my wife and I were like, “Seems legit!” and turned on every light in the house. For the rest of the week.

Your art is beyond awesome – how did you develop your style? You capture that era’s art style so well!

Thanks! I’m pretty much self taught. I try to learn new things through observation and when I became interested in doing woodcut styled pieces, I looked to the old texts as my starting point. There is a certain rough-and-ready feel to the woodcuts used by early printers for books or broadsides that I really enjoy.

Usually for me the process starts when I discover some woodcut and think to myself, “Man, that could use some aliens.”

How do you create one of these pieces from start to finish?

I try to work images from actual medieval woodcuts into my work when I can, so usually for me the process starts when I discover some woodcut and think to myself, “Man, that could use some aliens.” From there, it’s a lot of sketching to reach a final design, followed by drawing the whole thing all over again on transfer paper so I can prepare the block. I used to use wood or linoleum to print, but moved on to this pink stuff that feels like a dense pencil eraser. Because I print to eight inch thick sheets of wood, I need a semi-flexible surface to press – otherwise things get smudgy pretty quickly. Carving the block comes next, followed by proofs and corrections. The whole process takes maybe 10 to 20 hours per piece.

It’s kind of ironic that the process you use to make your art is kind of witch trial-ish.

Hah, yeah. I take an image and work it over with sharp implements and then press it under weight until it gives up the goods – sometimes fire even gets involved! It’s Photoshop by way of the Witchfinder General.

Tell me a little bit about your Artist Shop!

One of the neat things about my Artist Shop is that it gives me a little leeway to play with my designs in a way I don’t normally get to do. Usually, I’m all about black ink on wood, but with my Artist Shop I can experiment with color and give my designs a little flash. I’ve split my shop into three main collections – UFOs/Aliens, Lovecraft, and the Secret Chiefs.

What’s the story behind a few of the designs in your shop?

So the Lovecraft and UFO stuff is pretty straightforward, but the Secret Chiefs require a bit of an explanation. If you go back to traditional Western Occultism (the magick-with-a-“k” stuff), you’ll no doubt run into the Chiefs at some point. They are the Secret Masters that control the world, intelligent magical forces that guide civilizations from behind the scenes. They are avatars of concepts and by acknowledging them, you can curry their favor. So of course, I need to make up my own! Thus we have The Regent; a flaming skull at the center of an illuminated pyramid, fed by the whispers of scholars. The Traveller; a being not from our world whose saucer is a magickal circle. The Initiate and her unseeing wisdom, a beating heart in her hand. There are more out there; the Summoner and the Mendicant, the Wandering Prince and the Lady of the Black Flame…

What inspires and feeds into your designs the most?

In addition to the obvious Lovecraft and associated books of forgotten lore, I’m a big fan of fringe literature – UFOs, cryptids, time slips, ancient aliens, all that. Authors like John Keel, Bud Hopkins, Charles Fort, and anyone else who writes down all the weird stuff that happens around us all the time. I won’t say I’m a complete believer, but I want to believe, you know?

What do you love the most about Salem? What are some of your favorite Salem stories?

Even though I tend to eschew your standard pointy hatted witches, I take my lead from Salem. This city has a way of pulling the weird and wild from all over, making them its own. You walk down the street here and you pass people who make a living dressing as Nosferatu, three different ghost tours, witch shops, palm readers, and two Harry Potter stores. Even though Salem has plenty of history of its own, it’s never satisfied and hungers for more.

One weirdo drawn to Salem was Howard Phillips Lovecraft. He held Salem in high esteem, basing his fictional city of Arkham on it. Lovecraft visited Salem by bus every year or so to play tourist and wrote extensively about these visits in his letters. He explored our streets and wrote about colonial homes turning into bottomless maws, ghost ships floating into the harbor, and misshapen children locked in the attics of Puritan families…and then he’d run into a cat and the rest of the letter would be about him trying to feed it ice cream. The only things Lovecraft loved as much as cosmic horrors from beyond space and time were cats and ice cream.

I’m fully aware that my stuff is a niche of a niche. I’ll never be mainstream and I’m okay with that. Still, that moment when someone who ‘Gets It’ sees one of my pieces for the first time? That’s why I do this (well, that and the ghost from my son’s room makes me).