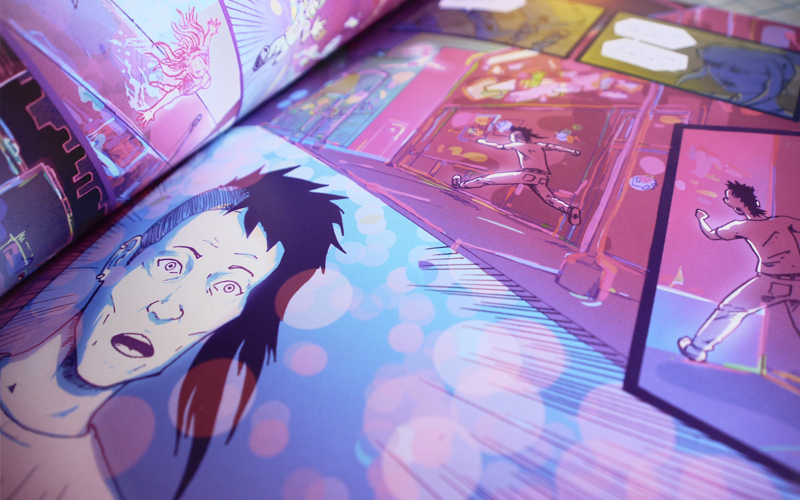 When it comes to comics, I’m shallow. Doesn’t matter if it’s the next freakin’ V for Vendetta, if the style’s not my style? Can’t read it, won’t read it.

So when I saw the neon-and-bokeh style for Jacob Halton’s “Boke Expressway“? I didn’t even need to know what the plot was, I was in.

If you could actually get high off of pixie sticks, I imagine this is what they would make the world look like. He’s got a Kickstarter going to bring this comic to the glossy pages of a comic book so beautiful that your eyes’ll feel like they’re lost at Electric Forest.

Check out this Chicago native’s artwork and interview below. And if you’re feelin’ generous, check out his Kickstarter – it’s super close to reaching its goal, and you could be the hero that this artwork deserves.

Tell me a little bit about your comic!

This series is about a group of friends who all hang out at clubs together. In the series, each chapter will focus on one of the characters and a problem that turns their world upside down. This first graphic novel is about a goofy guy who hears a mystical song that compels him to abandon reality and chase it down. It’s based on the Greek myth of sirens, as the song manifests as a woman singing it who leads him away from the club and into potential harm.

Your style is kind of Akira-meets-“Tokyo Ghost”. Where did you draw (pun unintended) inspiration from?

Thanks, that’s a huge compliment! Otomo is a huge inspiration for me in terms of drawing style and the cinematic way he approaches making comics. As for theme, the biggest inspirations were trippy, psychological films like Vanilla Sky, The Machinist, Inception, and other movies that warp your view of what’s up and what’s down.

The visual style of the film is inspired by films like Enter the Void, a super trippy story about drugs that relies on extreme visuals and camera work to make you feel like you’re on an increasingly wild trip. 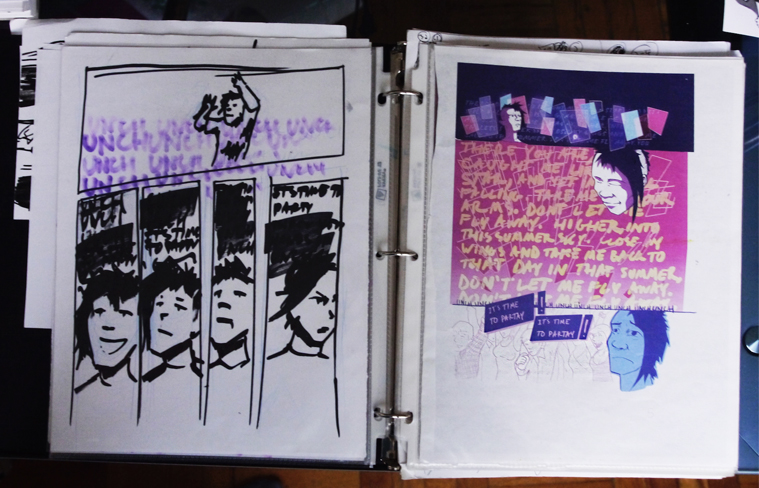 Some of the other themes were taken from films like Millennium Mambo, Human Traffic, and Trainspotting, that show the grittier, darker side of clubs and partying, while still being about young people learning how to deal with life.

It’s a stunning style. How has it developed? 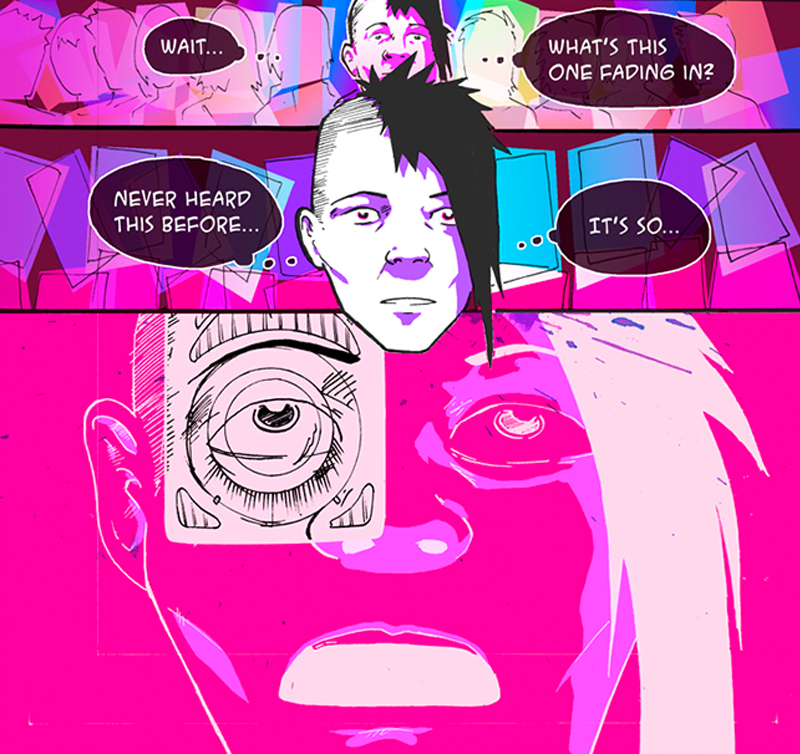 The style of this book has taken a long time to develop,
and over the few years I’ve been working on this book, I’ve changed things up a couple times—remixed, if you will—in an attempt to find the right look for the story. To find an actual “style” for it required coming up with logical rules for how to draw/color things. For example, I try to only color shadows in the day & light at night, and let the rest be whatever the background color is. It makes it look like how we see things at night and in clubs, and during the day everything is really bright, as if you were hungover. 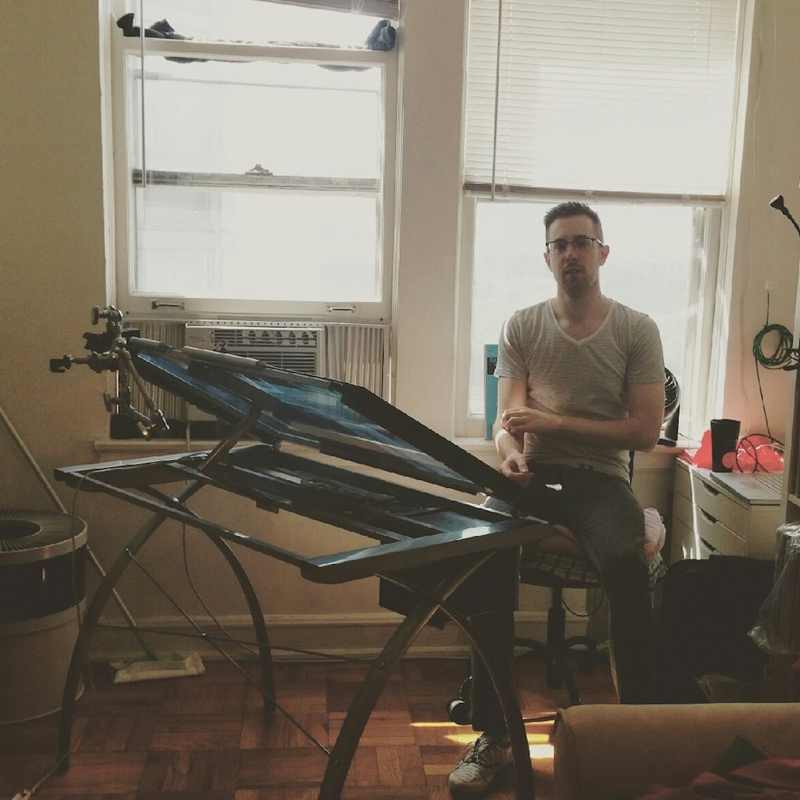 What’s the most gratifying song you’ve had stuck in your head that you FINALLY learned the name of?

“Freestylers – Don’t Stop (Fatboy Slim Mix)” — They used to play it during talking breaks on my hometown’s local radio station and it was my favorite track on a breakbeat DJ mix when I was in high school, and it has the sickest bassline I’ve ever heard.

What else sets your comic apart?

What really sets this book apart is its a more personal story that a lot of us can relate to, and the way I tell it draws you into the story to really let you feel what the character is going through, rather than just watching things happen. 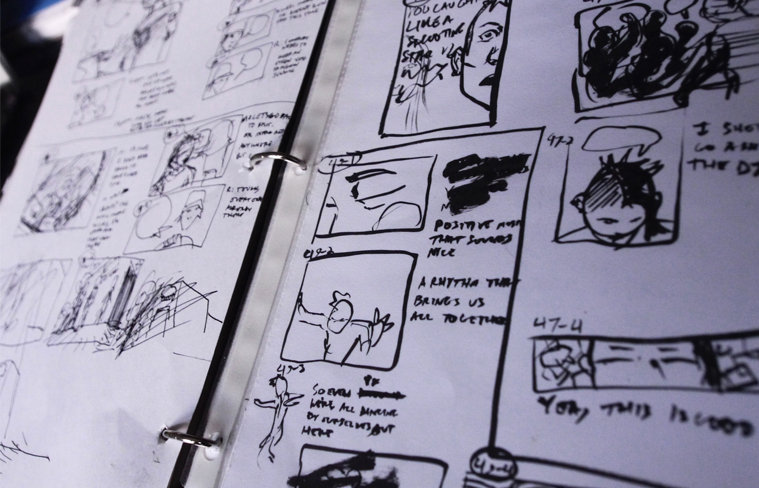 While a lot of comics deal with huge challenges and villains that want to bring about the end of the world, the problems these characters face are rooted in the internal kind that we all deal with in life, that makes it feel like our world is crashing down around us.

What other kinds of comics have you written? 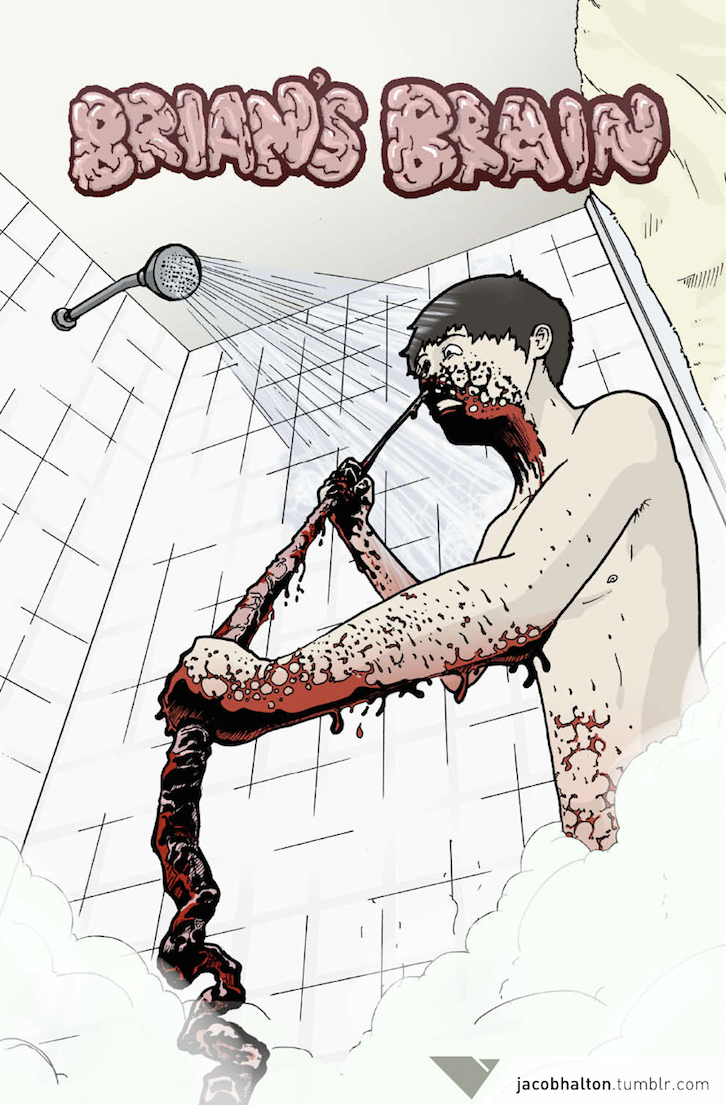 I have a popular mini comic in shops around the city about a kid named Brian pulling his brain out of his nose in the shower. It’s called “Brian’s Brain.”

Chicago has a great comic community. There are a ton of awesome shops here, run by great people who are into supporting independent and mainstream creators. There are a lot of creators in Chicago too, some working on big name titles, and others working on really great underground stuff. Also C2E2 being an ever-growing, amazing show is a great to make Chicago a hub for great comics. This city is full of a lot of people doing great things, and while making comics usually keeps me stuck at home, when I get out into that scene it’s always inspiring.

Was it inspiring to write this story in one of the birthplaces of modern house music?

Oh totally. I find house music has the best culture associated with it, and even though the story describes the music more as trance, the vibe of house really represents the whole idea of PLUR from the old rave days. At house events, I always see every age, color, and type of person, and everyone is unconditionally accepting of everyone else.

I’m such a music fiend, it’s hard to single out just a couple artists. Recently I’ve been listening to a mix of future beats and trapstyle, and a lot of drum & bass and dubstep when I need to get work done fast. Pretty much anything with a good melody and solid rhythm.

What’s your hope for this comic?

I’d love for this book to take off and reach fans who are tired of comics that follow the standards for what comics “should” be. Comics are a medium, not a genre, and after talking to a lot of people at shows for the past couple years, I know there are enough readers who appreciate this kind of psychological storytelling, and are hungry for something new.

The most fun stories (that I can remember) have been at festivals, getting separated from the people I came with, meeting some other people and end up hanging out with them; and then meeting up with the original people in one big friendly group by the end of the night. It’s like you turn your compass off and just let the wind take you, and it often ends up in a good way.